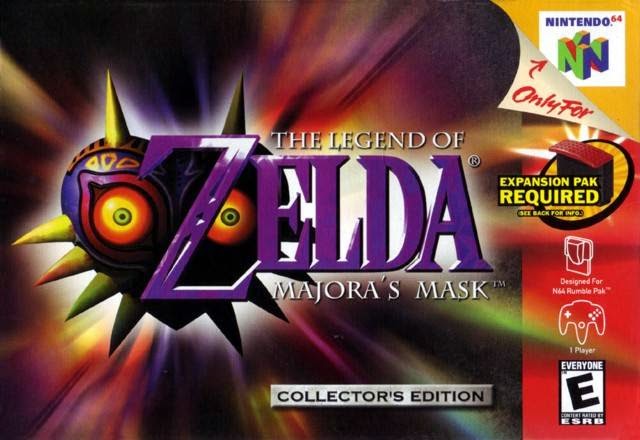 It’s too bad I didn’t get to play it very much. Near the time, I was going to play it through again (this time, finding everything), my friend convinced me to trade in my N64 for a GameCube. Those are not backwards compatible. So I had to wait until I was able to replay it on my computer, but that brought back a flood of memories, as well as great insight into the back story of this game.

When most people hear about Majora’s Mask, they think either “What? There was a game after Ocarina of Time?” or “The most underrated Legend of Zelda game ever”*.

*All data based on the pictures I see in my inside-brain-TV.

I fall into the latter category – it seems like most people forget about this game. It’s the follow-up to the greatest game ever, but most people think of it like a second jar of peanut butter.

I’m not sure where I was going with that metaphor, but the point is that Majora’s Mask is different from nearly any other Zelda in terms of tone. It’s on par with Aeris dying and Portal’s ambiguous ending. What made this Zelda the black sheep (besides the presence of Tingle – man, who knew what that weird guy was going to become)?

Answer: Because Eiji Aonuma – the dungeon designer of Ocarina got to become director for this game – he got full creative control. Everything in this Zelda revolves around sadness, hopelessness, and inevitability. You continually shift backward in time, trying to prevent things from happening, but they inevitably do. It always rains on the second day. The Kafei/Anju scenario can be completed, but never fully resolved – Kafei remains cursed in a child’s form. The Romani Ranch is beseiged by thieves of two kinds, which result in the little girl ending up insane and the business going under.

And seeing the moon crush Termina is both cool and tragic at the same time. The three masks are based on three people who die throughout the game. And there’s nothing sadder than watching the giants try and keep up the moon, only to fall, and let it destroy everyone. Then Link gets blown away and returned to the first day, as if nothing every happened. It’s like Groundhog’s Day.

This was my favorite Legend of Zelda game. I loved the darker tone, because it made the world twice as rich. Instead of having a long, spanned out world, now everything is condensed and intensified. Only four major dungeons, but a bigger overworld (depending on how you define overworld. I define it as “not-temple-or-town”). If you want to know how deep the rabbit hole goes, check out this article on the Stone Tower (also known as the “upside-down temple”). This was Ocarina of Time, but more vibrant and cultural. OOT may have brought us the forms, but Majora’s Mask added the depth. It showed us what Zelda could be if you took the time to worldbuild – which is the key to a good fantasy setting.

Each character has a consistent role to play, a goal, a life, a background. The mayor is sitting through political. The city is being continually built. The Zora band hasn’t shown up yet. The dance troupe needs a new number. The Deku kingdom is swamped. And the Zora’s unborn children are missing, presumed tasty. Everything that was good in Ocarina of Time was great in Majora’s Mask. Everything that was broken was fixed. Everything that was missing was found. I guess the problem was some people didn’t want to deal with that – with the reality of not everything being saved and happy. It doesn’t make sense for a fan to think that anyway – no matter what, Ganon’s going to come back and your generational descendant is going to have to undergo ordeal after ordeal to save the world, lest it be ruined for all time.

All the remaining Zeldas have been “playing it safe”. Wind Waker had a big ocean, and cel-shading, but as far as the storyline, it was neither bold with its character choice or development, nor very realistic. Twilight Princess went the opposite mood of Zelda, but beyond taking Zelda out of the play for most of the time and leaving Hyrule not-so-free, nothing very risky occurred. Nowadays, you don’t dare have anything dramatic or tragic (although Midna-philes would argue that the destruction of the mirror = sadness, although it’s just a plot coupon away from erasing that).

There’s nothing realling interesting that I can pinpoint as a memory – just the feelings that this game evoked. And it’s only after you’ve played the game that you can think back and understand the implications of what you’ve just done. You never quite know if what you’ve done saved anyone. If you spend the last cycle doing nothing but playing the Song of Time on top of the Clock Tower, did you ever really accomplish anything? I like to think that all the deviated timelines you created merged at the end, but there’s really no evidence of that, and how would that be metaphysically possible anyway? The Anju/Kafei story has multiple results – they can’t all be right. You relive the three days over and over, and you watch people live and die over and over. You know that each time you left the timeline, you failed to save Termina.

You don’t really win, you just run out of game to play.