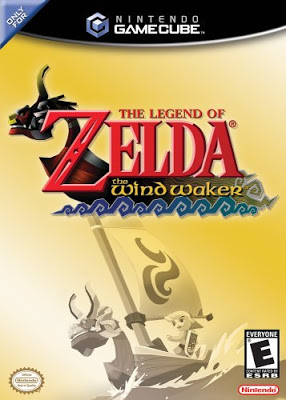 I hate to put another Legend of Zelda game on here, but if I didn’t, it would look like I played nothing for five years. True, at this point, I hit a dry spot, because of my evolving relationship with what is called a “female” – a most interesting species, not unlike a large pet – and it was her or the games. No, she didn’t give me an ultimatum, but if I wanted to keep her, I would have to (ugh) spend time with her (j/k love you honey!). And since video games consumed my life, they would have to be decreased. There was some Super Smash Bros., Mario Kart, but not much else I remember besides that. Certainly nothing memorable enough to write an article on.

Except Wind Waker. When I first saw Wind Waker was going to be a cel-shaded, I was like everyone else — skeptical. But I thought, “Hey, if they can make it look like you’re playing a cartoon, that would be pretty awesome. But it would have to be exactly like a cartoon.” I always thought it was interesting that fans clamored for a mature Zelda, wanting to recapture the magic of Ocarina of Time, and Nintendo thumbed their nose at them.

I pre-ordered it in September 2002, because with it came a special bonus disc of OoT and OoT: Master Quest. I knew I was going to get the game anyway – spend now or spend later, and this way I got a bonus game. Awesome. The funny part was, even though I got the game in March 2003, I didn’t even unwrap it until school broke for the summer. That’s pretty damn unusual for me. It just sat there by my GameCube, unused and pre-packaged. What happened? Well, girlfriend games and PS2 games took precedence.

Then I started playing it. Yep, it was a Zelda-game, but it felt more watered-down than the previous Majora’s Mask. The play was as simple as the colors. Only five dungeons, most of which were “one room, one puzzle”, a few side-quests, some neat new items (although I liked the concept of “stealing” with the grappling hook), and lots and lots and lots of sailing.

This was probably the biggest problem with Wind Waker, and most people agree. 50% of your gameplay is spent on the water, sailing from one island to the other. And there are 49 islands, all pretty small, so there’s lots of sea in between. Other Legend of Zeldas have plenty to do and explore inbetween worlds, but in the sea, there’s not much. A few rupee chases, some monsters (who obnoxiously knock you out of the boat), and various treasure that takes ten minutes to line up your boat just right. I guess it was to hide the load times, but really, do we need that much sea? And Twilight Princess didn’t have any discernible load times.

But as boring as sailing the sea was, there was something so cool about such a wide expanse of flooded Hyrule. It feels like you’re really sailing on an ocean, and the ocean is wide, flat, and there’s a lot of it. There are light waves, heavy waves, storms, seagulls, and blue sky. It’s realistic. Even though it was a bad idea to design a game around it, it’s really being there.

When I played this a third time with girlfriend, I used the Tingle Tuner. I took a backseat and played navigator while she did the heavy lifting. It doesn’t let you do much besides play GPS, which isn’t much good when everything’s in a single compass direction with no obstacles in between. On land, the most effective thing you can do is target bombs in certain places, but that costs money (of course, in Wind Waker, money is quite plentiful, so that’s a mercy). At least it gave me more to do than sit back and bark orders.

And this is how I discovered I am a horrible backseat driver when it comes to video games (if you couldn’t tell from my Kingdom Hearts rant), especially action games. Here’s a typical exchange: “Get the heart, get the heart! Use the sword! A button! A button! Use the sword, dammit! The monster caught you, press A, press A! No, no, you can’t do that. Jump! Jump! Jump! Dammit, jump! Why aren’t you jumping, goddammit!”

I discovered that if I wanted to play video games without profusely swearing at my wife, it would have to be in some form of co-op, or something where I can have a little more control than the Tingle Tuner allows. This is why I’m not a teacher. But I will say that we did beat the game, and I was quite proud of her when she managed to use the quick-attack to give Ganondorf that final blow.