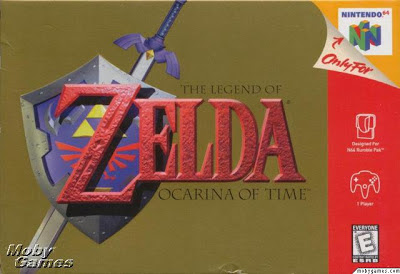 I can’t say much about Ocarina of Time that hasn’t already been said (I think that’s the third time I’ve used an intro like that). Well, let’s talk about it from the two points I keep emphasizing – environment and plot development.

I think most of the greatness of the environment came from the mind-blowing paradigm shifts from the previous Zelda games. There is now a Castle Town. You meet Zelda first, and she’s not kidnapped. There are new societies and races who live in segregated cultures. It’s basically the difference from 2-D to 3-D – a different dimension to explore and change the way you interpret the world. It’s a whole new Zelda and yet it’s not. Nonetheless, we must treat this as a game on its own.

You know you’re in for a great environment when you first emerge from your treehouse. This is an entire village. I’d never seen anything so complete. It’s got houses, pictures, shops, pots to break, stuff to steal. I’m so glad I got this game at an age where I could explore and fully enjoy it. Not rush through it because the baby needs attention. I played this many times because the world felt real. I always thought Hyrule Field was a bit of a catch-22. On one hand, you can’t really have an effective fantasy world without lots of open space. On the other, that doesn’t translate well to a video game (see Wind Waker). A few things to fight, but otherwise vast and empty. It’s both awe-inspiring and dull at the same time. Then you get to Castle Town and its a bustling metropolis. You meet a society of Gorons, a society of Zoras. They all live and exist in a tiny cartridge. The total culture of Hyrule oozed out and integrated into the world.

Speaking of races, part of a video game environment is the characters. More specifically, the NPC’s. Darunia, Malon & Talon, the old witch twins, the Deku Tree, deku scrubs, the windmill guy… there’s a reason all these people keep popping up in various incarnations. They rule. Malon is cute and a makes a good corner of the Link-Zelda-??? love triangle. Witches and talking trees are staples in fantasy stories. And the deku scrubs are great because they’re not quite evil, not quite good. The Windmill Guy, I’m not sure about, but I’m not afraid to admit that I am a little scared of him.

And good characters segue nicely into plot development. The thing that Legend of Zelda does best is storytime. Instead of a basic Save-the-Princess/Fetch-quest like most Zelda storylines before it, Ocarina brings out a cavalcade of emotions. Whose heart didn’t break when you saw Saria’s wistful glance back as you leave the forest? Wonder at the all the people in Castle Town? Fear from the ‘thing in the well’? Laugh at the Zora princess’s stubbornness? Mystery of Sheik?

And then there’s the final boss. I’m amazed I was able to finish this final part of the game without dying. From the dread of climbing the staircase, with the loudening organ music and increasing light, to figuring out how to kill Ganon while trying not to fall a hundred feet over and over, to the race to the bottom. And then, oh, no, you’re not done yet, you’re still playing. There’s something in the rubble. Oh, Link, be a dear and check it out. Right away, ma’am. Psyche! It’s a giant pig-dog and he’s pissed. He’s so bad, he doesn’t even have a subtitle under his name. That’s how you know you’re fucked. Christ, what kills him? The hookshot? Bows and arrows? The Keaton Mask? Aah, I don’t have time! He’s swinging the Hammer! Press A! Press A! Whatchu pressing “select” for?! You don’t got time to make a profile! Shoot ’em in the head!

And then the ending is good too. I was afraid the credits would suck – lots of establishment shots over the various regions – but then you get to see all the main characters having a party, so that’s nice.

My memories of this game are few. I do remember I spent six hours, my entire after-school day, defeating the forest temple. Three hours for the temple, and three for trying to defeat the boss. This is the level where you know it’s not kid time anymore. For some reason the difficulty jumps skyfold. And it works, because now, you are an adult. And when you’re adult, things get more complicated. This is like the “coming of age” of the video game system. I also remember listening to Kid Rock while playing this dungeon (not during the 6-hour endurance test). I don’t know why, but now when I listen to the album, I think of the forest temple.

This is the first game that I think can be called an epic. That probably lends to its staying power. This game is thick with symbology and mythology so that its storytelling is on par with Star Wars – a Greek drama with heroes and villains and colorful characters and worlds at stake. The turning point of story telling in video games. Everything a story should have. This truly is a legend.

By the way, am I the only one who was confused for years that the game’s called Legend of Zelda, when Zelda’s only a minor character, barely integral to the plot? How many people out there are still referring to the lone playable character as Zelda? I mean, I know he’s girly, but…