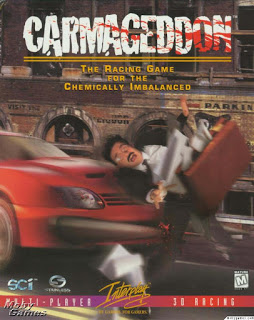 Here is the quote (as I remember it) from the Carmageddon instruction manual under storyline. “You want a story? Go read a novel.” Sure, each car & driver has a funny profile (Juicy Jones drives a bouncy SUV), and the cities have their share of advertising and character, but that’s largely irrelevant in the context of the game. Carmageddon is a massive death race with three ways to win – either complete the number of laps, take out all the other cars, or kill every human being on the level. This is all you do. So why am including it if there’s no story? What am I going to write about? Have you gone mad? Are the communists jumping out of your breakfast cereal?

I write about this because, as I was going back through my diaries in high school and college, there were some mentions of just wanting to play Carmageddon all day. Why? Well, because I was depressed and Carmageddon was mindless, violent distraction fun. No, there is no story. There are no characters. The game is punctuated by a cutscene in the beginning of you running over the flag-dropper, and a cutscene at the end of you running over the trophy presenters. Your goal here is not to win, but to take. I started playing it in high school, but in college is where its brutal nature seeded in me. I still carry it over with games like God of War.

And that’s what Carmageddon got right – its mindless fun. You don’t need a story to make a good game necessarily. In fact, they provide just enough so that you can cast yourself in the role of the driver and make up your own story if you want. And if you don’t want, just drive around, run people over. The mechanics of the car crashes are very realistic and therapeutic. You can reduce your wheels into a smoldering wreck, then accordion yourself back out like Christine.

I have great memories of playing this in my college dorm room after a frustrating day in Database class and imagining certain professors behind the wheel or on the sidewalk. Part of the reason I took so long to upgrade my Windows was because I was afraid I wouldn’t be able to play great games like this anymore. I’m really surprised that the “mindless destruction” genre hasn’t made any advances. The last game I remember like that was Blast Corps for the N64. With today’s technology, you should be able to destroy stuff in a fun and realistic manner. I’m thinkin on par with the Transformers movies with the amount of debris created. There shouldn’t be any reason you can’t make a fun game like that.

And thus ends the “Silver Age” of video games – early high school and middle school. Like me, video games stopped being polite and started getting real. As my life started getting more complex, so did the games. But complexity isn’t a bad thing – it adds levels of appreciation and a more satisfying experience. But how complicated do things get in the future? And what happens when the differences between good and evil become a lot less black and white? Find out when we enter late high school and beyond.