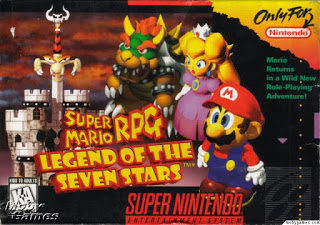 Super Mario RPG was the first RPG I ever owned. You might be looking at my side bar going “Huh? And how many posts tagged with Final Fantasy do you have?” I didn’t like RPGs as a kid. Why would I want to play a game where you attack a guy with math, instead of a sword? I didn’t like the idea of letting numbers determine whether or not I could kill a guy, instead of how fast you can hit the guy with your sword while avoiding the other guy’s. That’s what battles are about, not hit points and strength, but tenacity. RPG’s meant you gave up control of how you played the game, and having nothing to do while your character strikes a blow didn’t seem like real combat.

But it was Mario, and I love Mario. He’s the modern Mickey Mouse. And I love Mario games. And the idea of such a well-rendered, in-depth Mario game, sort of Super Mario Bros. meets Legend of Zelda, was appealing to say the least. It would be the ultimate video game. Nintendo Power also gave their blessing to it. I think the clincher was that the “resubscription bonus” for Nintendo Power was a free strategy guide of my choosing. The problem was the only guides were for games that I either didn’t have or didn’t need a strategy guide for – except for Super Mario RPG. Plus, with the addition of “timed attacks”, I would have something to do while my character did his thing.

The story of the game blends new elements and old. It takes a relative few things from the Mario universe (Mario, Bowser, Peach, the Mushroom Kingdom, and Yoshi mostly), and puts them into a vast world that I didn’t even know existed. It would have been easy to make it a straight shot though the various koopa kids, but Square blurred the lines of good and evil here, as they are good at doing. Instead of Mario being given a mission, he had a quest. And quests have ups and downs, obstacles and shortcuts, keys and locks. Plus you had other characters on the ride, and you had to take care of those characters. It wasn’t just you anymore. Mallow needed to find his home. Bowser needed his castle. Geno needed some prozac (he probably ingested too much Campbell’s Chicken and Stars).

All the characters in this game are fun. They tread the line of cuddly-sweet Care Bears, but whoever wrote this game knew how to please all audiences (“I left my bazooka at home! Jeez!”). It takes cookie-cutters like Bowser and Peach and turns them on their head. Everyone is lovable and memorable from the charade-loving Mario to Mole People to Booster, who had Pee-Wee Herman syndrome.

This game never left you bored. Tehre were mini-games, resource management, colorful environments, and strategy-strategy-strategy. There was always something to discover and it kept you challenged, even if you had a strategy guide. Plus it built well on rising and falling action, from multi-stage bosses like the Giant Blooper to the developing discovery of who Smithy was. The best part was that the giant symbolic sword in the middle of the castle isn’t even the last bad guy. There’s a whole final world before the very end, and it all contributes in making the player want to get back at Smithy for putting the world through hell.

This game introduced a depth to video games that I didn’t think possible, only rivaling Legend of Zelda. This was the marijuana that got me into Final Fantasy crack. If it was developed by anyone other than Square (as I’ve played other non-Square SNES RPGs since then) I don’t think I would have picked up another RPG.