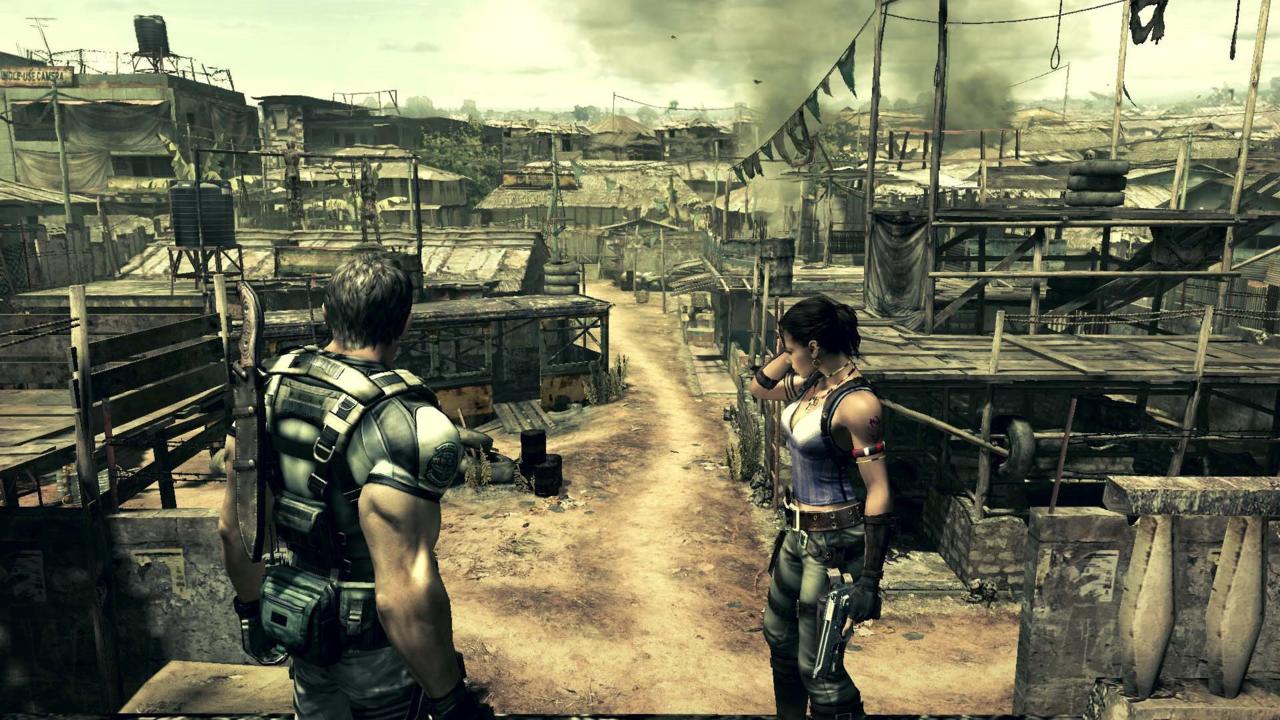 When Resident Evil 5 came out, I remember there was much outcry about it being racist, because you play as a white guy and you shoot a bunch of Black people. What could be wrong with that?

This came about because I was listening to a video game podcast (The Besties) ranking the best Resident Evil games and RE5 didn’t make it past the first round. Mostly because it failed to fix the mistakes of RE4 and didn’t add anything new or innovative (except maybe the co-op).

So I guess you could call this a “Late to the Game“. I played RE5 way after it came out, but not, like, yesterday.

They’re IN Africa. There’s going to be Black people there. It’s hard to walk around Africa without running into one or two. If there was a zombie outbreak, I guarantee a few would get infected.

There IS a part in the beginning where a blonde white woman is pulled against her will into a shack and infected with the parasite. It’s “blink and you’ll miss it”, has no bearing on the plot, character model has no name, never shows up before or after. Why is she there? Why did they make her white to stand her out, then do nothing but fridge her?

There’s also a white antagonist named who seems to be a slimy carpetbagger. He’s a “business man with standards” and sounds like Wario if he were less cartoonish. He acts exactly like Chucky, but is more a pastiche of Salazar from RE4–he can’t be taken seriously.

And let’s not forget Booby McGee and Sheva Alomar, the light-skinned female characters who barely look Black despite being African. These aspects make the game “iffy” at best and “terribly racist” at worst. So I’m not saying it’s got a halo on its head.

But when Resident Evil 4 was released no one made an outcry because they were all Spanish people. And it’s not like there’s no similar history of racism and colonialism against Hispanics and Latinos. Is it because slaves came from Africa? But then aren’t you treating all of Africa as a country?

People don’t take time to understand context when it comes to cultural insensitivity, just like Anita Sarkeesian’s analyses. This game was made in Japan. Do they have a history of racism there? Yes, indeedy. But it’s like this:

Mostly based on what American troops brought over during the WWII occupation. Japan’s history does not include bringing a whole race of people from one continent to another, enslaving them for three-quarters of a century, then letting them go without a system or compensation to “pull themselves up.” (In fact, instituting several social programs and laws to ensure they never gain political or financial power.)

So when they try to duplicate past success, they think “Well, going to places other is working out. We went to the South Pacific and Antarctica in Code Veronica, and Spain in Resident Evil 4, which was a smash. Where could a zombie outbreak occur with interesting visuals and is somewhere Umbrella’s money can create a foothold? How about Africa?”

Now this is a case of treating all Africa as a country, which might make me seem hypocritical since I just accused you of it. But we’re not talking about literary treatment, we’re talking about racism. Why would you think Japan’s intent is related to American slavery? Do you think Resident Evil 5 was meant to sell to Proud Boys and right-wingers who get their jollies off shooting Black people?

Now I’m certain some of those sick types bought Resident Evil for that reason. But once you put art in the world, you aren’t able to control what other people do with it. No one wanted My Little Pony to become the fandom for unwashed convention-going demi-misogynists with obsessive tendencies.

Would a Resident Evil where it all takes place in Detroit or South Central Philadelphia be racist? As long as the number of zombies reflects the demographics of that city, I don’t see how. A Resident Evil that takes place in Madison, Wisconsin and all the zombies are non-white — that’s racist. Because it’s lying about the true nature of the setting to induce a certain reaction (that of racist delight).

I might have put my foot in my mouth on this one, but please, tell me what I missed.