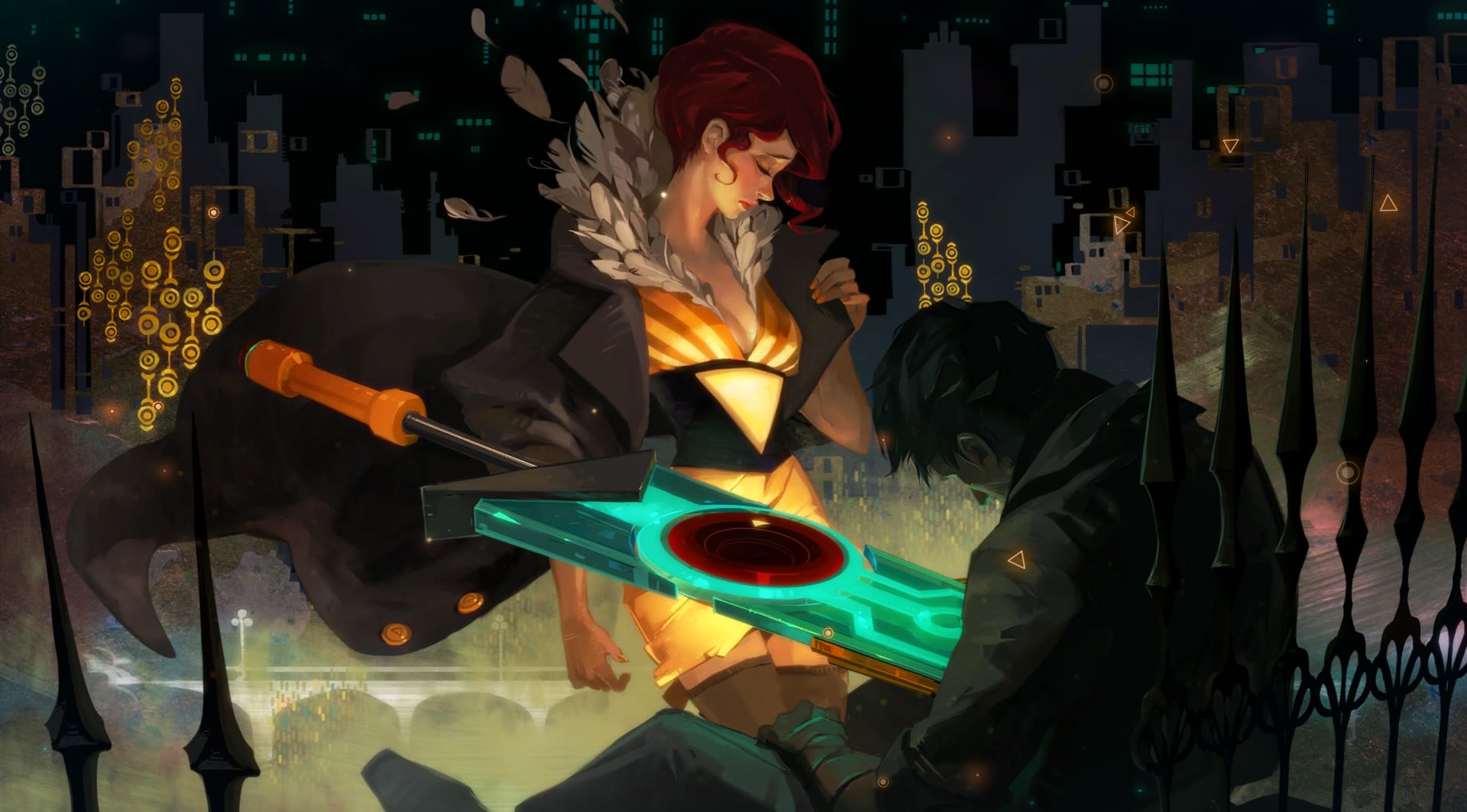 So when I learned the same developers were creating a follow-up to their breakout hit, I jumped in feet first. It was going to be a little different–a computery cyberpunk feel and starring a slender well-to-do woman. But good art begets another. This game was called “Transistor” and released in 2014.

I’ve attempted playing it three times and only now have I gotten past the first level.

Not because it’s hard. But because it was boring. The problem was I had to get past the tutorial to understand where the game’s “fun” was.

One part is the “Turn()” system, which is a little like Fallout, where you can choose between real-time combat or queue up a series of instantaneous actions at the cost of a cooldown. The trick is to plan your attacks and movements efficiently.

The other part is the actions you get. Each one you get can be its own action, an enhancement to another move, or an enhancement to your character. Mix and match to try new combinations and see what best fits your style.

So that part’s fun for me, but it’s no good unless the game answers a crucial question — what’s the point?

In Bastion, it’s quite clear — some “Calamity” has broken up the world, generated all these weird monsters. You need to find the pieces of the Bastion to “fix it”, although you don’t quite know what it does until the end. And along the way you discover interesting tidbits about the world’s culture and characters, like uncovering a fossil.

There’s nothing like that in Transistor. It’s just you–another silent protagonist–and your chatty sword. There are no people in this world, just mute monsters. Oh, unless you like reading. Yeah, I guess each move is a person? And you can read about them in your encyclopedia when you pick them up. Long paragraphs about these people’s lives and what they did for the empty city you’re in. Because when I play an action-RPG, the part I like best is reading. Especially about characters you never meet.

You never encounter these people, never talk to them. They never show up in flashbacks or diaries laying around (either Resident Evil or Bioshock variety). I might as well hit the “Random Page” button on Wikipedia. If there’s no context to the descriptions, if it never matters in the game, then why should I give a shit about reading it. I wonder how many man-hours were spent on these biographies that were probably the least accessed part of the game.

The very first scene of the game has you standing in front of a man slumped over and stabbed with your giant circuit-board sword. You take it out and start moving. That’s it. The sword seems to imply you have a previous relationship (it calls her “Red”), but you don’t know if you stabbed the guy, discovered him, if that’s your sword or you just found it, who is in the sword, why you were there in the first place, and so on. There’s even a little flashback scene where it shows that, no, you didn’t stab him, just discovered him, but that’s it.

The game is essentially “walk the infinite hallway”, broken up by occasional battles. Your sword is supposed to be guiding you, but really there’s no way you can deviate from the path. He occasionally chimes in about where you are in a gravelly voice. “Hey, Red, look, it’s the Barkland Heights.” “Looks abandoned… wonder where everyone is.” “What a night. You’re still in one piece. That’s all that matters.” “Here he comes.” “Yeah, good call.” Really useful stuff, but it’s the only narrative color the game gets.

I hate games with this “story amnesia”. The characters know everything that’s going on, but we don’t. We, the player, have to piece together what happened, making the story part of the gameplay. I don’t want to play a game like that. A story shouldn’t be a puzzle. Well, I guess it can, like in Memento or a mystery novel, but in Transistor, it distracts. The player character knows where she is and who she is, but we, the player don’t.

Also just a basic storytelling mistake. And it’s especially bad in a video game, where you need to give your player motivation to play. This isn’t an unreliable narrator. It’s not trying to demonstrate something about the reader/player’s prejudices. It’s omitting or hiding information for the sake of drama. But it doesn’t add suspense, just confusion. That’s ludonarrative dissonance. It’s like in Bioshock: Infinite. You have this deep meditation on fate and American exceptionalism and alternate realities and quantum theory… but then you also grind someone’s face to a pulp with a rotating gear tool.

At least in Bastion, the story was simple enough that keeping things vague didn’t have much of an impact. When the puzzle pieces are big, you can kinda tell what the picture is anyway. But here, where you’ve got terms and jargon that never get a definition, that’s where my frustration lives. And I have a bad feeling the ending’s going to make as much sense as Birdman.