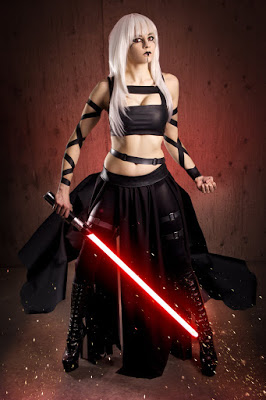 What is the point of the Sith? They don’t seem to have a goal that their reaching towards, except for opposing the Jedi. Meaning they seem to be one-dimensional villains that only exist for the purpose of the story.

They act as a counterpart to the Jedi. In fact their credo exactly mirrors all their traits. No empathy, just ambition and power and victory. But to what end? What do they want? Keep in mind Sith is not the Galactic Empire. The empire wants control over all planets in the galaxy so they can have power/unity/order. Or so other planets with a resource can’t just say “mine, you can’t have”.

But the Sith is a philosophy/martial arts discipline, like being a Jedi. It has a credo, it has a beliefs, deities, temples, artifacts. Its main idea is obtaining of strength and power through the “dark side of the force”, meaning greed, hate, anger, and fear. It’s a very Klingon way of life–focus on fighting, victory, and passion. 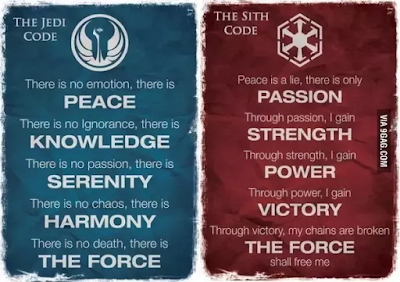 The thing about the Sith is that, instead of the Jedi who teach in collections and have a widespread population, there are only ever two Sith at one time. In the whole galaxy. Somehow they lasted a thousand years doing this, but this seems a real flawed way to establish a dominating force. You can’t exactly take over the galaxy with two people*. Not to mention that once you become a Sith, you’re either an apprentice scheming how to kill your master (which means your teaching will always end prematurely) or a master always worrying about when your apprentice is going to kill you. That’s no basis for a system of government.

*Yes, I know that Palpatine essentially did that, but he used political influence and minions in addition. He could have done that without being a Sith. I’m talking about the Sith as an entity in itself. 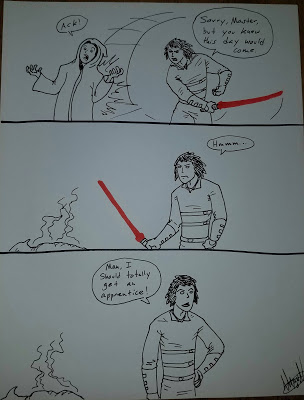 The Jedi have actual goals–peace and prosperity in the galaxy. But the Sith don’t seem to have goals. Or their goals are personal to the character, which still means the Sith simple exist to oppose the Jedi.

At first I was going to rant about Sith just being a one-dimensional villain. But maybe

I thought it was rather stupid to have an entity that exists solely to oppose the other party. Seems a wasteful life if your purpose is just to be the antithesis of this other guy. Then I heard about the “steak dinner”.

It’s the meeting that leaders of the Republican party had when Obama got elected in 2008. I mean, like, the day he was inaugurated. The oval office chair wasn’t even warmed yet, Obama was party-hopping, and they were making their counter-battle plan. What was that plan? To do the opposite of whatever Obama wanted.

For the sake of “their side” they had to be a united front and fight him on everything. Didn’t matter whether it made sense or not, whether it was good or not, if Obama wanted it, they didn’t that was the policy. They didn’t want to raise America up, they didn’t have an issue to push, they didn’t have a different morality to live by. They just wanted to oppose Barack Obama. If he said yes, they said no.

And the key was being united among all the party members on this. Everyone had to be in on it. For the sake of their team, every Republican had to click that “no” button when the president said “yes”. Their goal had nothing to do with America or the country or any political issue. It had to do with hurting the other guy. You didn’t win, so make it as hard for the other team as possible, no matter how petty it gets.

In other words, I thought portraying the Sith as simply opposing the Jedi was unrealistic… until I saw this. I guess it’s more plausible than I thought. 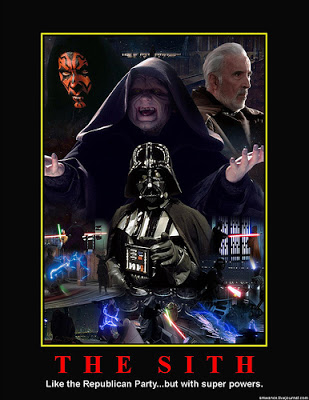