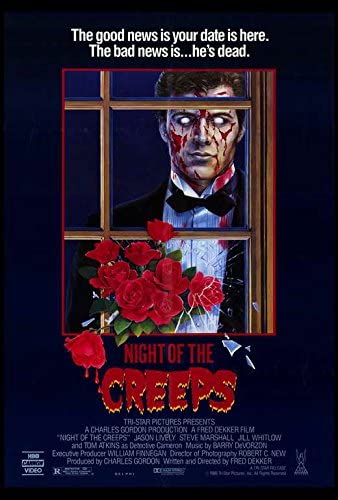 On a very boring Saturday, our cable was out. I don’t remember why. Maybe we had canceled it early in anticipation of moving. Anyway, this was one of those odd days where there wasn’t anything to do, and the timing was right (I remember it started at noon exactly), so I sat down in front of the floor model, wood-paneled, 198-something Magnavox and watched the best thing that was on. The best thing on was “Night of the Creeps”.

Usually, I channel flip, but this time I didn’t (what would be the point with only five stations?). And Fox was still a young network at that point and in those days, the newer channels usually had the best stuff. Not like CBS’s “The 700 Club” or some press roundtable or sports or, god forbid, “local programming”. Most of the time it was some dumb adult program like “Born in East L.A.” and “Three Fugitives” and “The Secret of My Success” but on rare occasions, you could catch “The Great Muppet Caper” or “Raggedy Ann & Andy”. However, you were lucky if you didn’t join in when the movie was half over. But this time, I was able to catch it from the start, which added to the novelty. And let me reiterate, I had nothing to do.

The problem when you’re a ten-year-old is that you don’t know what “camp” is yet. You don’t know what bad special effects are. Everything looks real. Life hasn’t trained you to see the puppet strings, the wires, cheap reverse motion techniques, plastic make-up. And this was not the first time a horror movie would bite me in the ass like this (see all previous Kindertrauma entries). You’d think I would know better at this age. I guess I thought I was old enough to handle it at this point.

It wasn’t until I was older did I appreciate Tom Skeritt’s performance, or the references to other horror directors, or its homages to B-movies. The “oven scene” is a beautiful piece of film-making you don’t see in regular movies, let alone bad eighties ones. It’s all showing, not telling. There isn’t even much movement, just a slow tightening on the open stove while you wonder “what is that hissing sound?” Also, it was weird to see Mr. Futterman in something other than Gremlins.

From nose to toes, the movie scared the hell out of me. It’s a basic concept–little slugs are spreading on a college campus, turning people to zombies. A nice guy named Chris wants to date a [GIRL] but the Jerk Jock stands between them. Think Animal House meets Night of the Living Dead. I could not get it out of my head for days, giving me insomnia. Every night, scenes would replay them in my head, like a second run. Here are some choice ones.

• The good guy has a friend named J.C. who uses forearm crutches (indicating a lifelong disability). He gets quite a bit of non-PC mistreatment by the preps, but he’s a true friend. At one point, he excuses himself from Chris and [GIRL]’s walk to go to the bathroom. But an infected janitor stumbles in and cracks his head on the porcelain floor, letting a bunch of slugs escape (the slugs incubate in brains). J.C. can’t get out as they’re darting back and forth on the tiled floor like blind rats. In a desperate move, J.C. falls out of the stall and crawls as fast as he can (which is not fast, given he only has his arms). Cut to one of the slugs wriggling in front of him. Cut back to him. Zoom on slug. Cut to him. Zoom on slug. The slug leaps. Commercial break.

• Sequel to the above scene. Good Guy Chris finds an envelope with “LISTEN” hastily scrawled on. It’s a cassette with a message from J.C. Besides the fact that this means the victims have consciousness after infection (which hasn’t been shown before and challenges zombie lore), the message is haunting as hell. It plays in one shot, one take. The hero’s face drops as he listens to the shaky and fading words of his only friend. The last time he’ll ever hear them:

Chris. There’s one inside me. It got in through my mouth. I can feel it. It’s in my brain. I don’t have a pulse or a heartbeat. I think I’m dead.

I killed one. I lit a match to it. I think fire will kill them. I’ve gone to the furnace room, the basement. If I don’t come back… heat will kill them.

I walked, Chris. All by myself, I walked.

I love you. Good luck with Cynthia.

• But here’s the finale. Chris actually goes down to the basement, straight out of Freddy Krueger’s nightmare. He finds the body of his friend around the corner, lying face down. Near his head are the melted remains of some slugs, still hissing and smoking. We don’t see J.C.’s face and that’s the scariest part.

• As with all horror movies, there’s a spring-loaded cat. The first one is nothing, just to establish that one of the sorority sisters owns one. Then later, an obviously real/not dead cat comes in. She picks it up again, but this time it cuts to its face–eyeless, ragged, bloody, snarling, maggots curling up in the empty eye socket. It’s obviously a prop, but ten-year-old me can’t tell that in a half-second shot. The weird part is that there is no follow-up–the scene just ends. This happens in the middle of the movie, before the big swarm. No one ever mentions this. You never find out what happened to living dead cat.

• The bully boyfriend gets “creeped”, but everyone’s too distracted about the party. So no one looks at him for the two seconds it would take to notice his gray skin, his white eyes, pallid sunken eyes.

Then the girlfriend–STILL not looking–takes him by the hand to sit on the stoop (she touches it!), thinking he’s here to talk about the fight they had. While she’s rambling, his head is spitting out black slugs like the world’s worst PEZ dispenser in the out-of-focus background.

• There’s a bus taking a bunch of frat guys (in cheap tuxes) to the sorority party. A zombie dog sits in the middle of the road and causes it to crash, killing everyone on board. Then the dog walks into the bus to let his slugs do their thing. Does this mean the slugs have intelligence? How do they know what a bus is? How do they know it can crash? Are they controlling the body’s movements (which runs counter to J.C.’s actions)? Is it actively trying to create dead bodies? Or is the dog just that malicious?

• Early in the movie, during the “setup”, there’s a throwaway line where one of the sorority sisters needs to store some jars for biology. The jars are full of brains. The stereotypically girly girl goes “ew” and tells her to put them in the basement. This never comes up again. Not even remotely. Until the climax when, after killing frat boys with lawnmowers, the girl and guy see some slugs running for the basement. Then the girl remembers what’s there.

The heroes go downstairs, and there is a five-foot high mass of slugs in the corner, all wriggling and writhing, crawling over each other like maggots on a corpse, presented in classic stop-motion (which is scary by itself–all that unnatural movement).

• But wait, there’s more. Cool guy detective is down there too. He’s got duct tape over his mouth and is dousing everything in gasoline and letting out gas. He’s about to make a heroic sacrifice and starts counting down (letting everyone get out of the house). Some of the slugs start reaching outward, ready to jump. As he clicks the lighter, the slugs leap toward him. Then big bada-boom.

• But wait, there’s still more! Unbeknownst to everybody, the cool guy detective stumbles out of the burning wreckage, smoking and burnt beyond recognition. He falls face-first on the pavement. His skull cracks open. The slugs got him. (Why didn’t he put the duct tape back over his mouth?)

• But wait, there’s yet still more! They skitter out and speed under a gate. The camera pans up and we see that it’s a graveyard. My little mind realizes how many tasty brains there are in a cemetery, plenty to start the whole thing over again, dooming the Earth.

• But wait, there’s yet still additionally more! During the pan-up, a spotlight suddenly snaps on a headstone. It sweeps over the graveyard. It’s coming from an alien spaceship, slowly searching for the slugs. Now, this should fill one with a little hope–the aliens are taking responsibility for their experiment and trying to fix things. But when I was a kid, I didn’t get this. Maybe the beginning prologue was cut from the TV version, or maybe I had just missed it. But either way, this felt like a Twilight Zone ending. The creeps are alien in origin? Stop the planet, I want to get off.

So yeah, this was a smorgasbord of childhood trauma. Of course, now I can look back at it and laugh and get the in-jokes and appreciate it. But back then, this was my Exorcist.