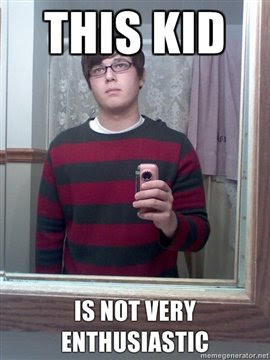 It’s still hard to stay enthusiastic about writing.  I’m still writing, so it’s not like I stopped.  But what I’m writing now doesn’t require me to bring my “A game”.  It’s fan fiction, so it’s nice to write with no pressure.  But I haven’t sold a short story since (goes to look up answer) since July 2014.  A whole year and nothing.  Did the market change and no one told me?  My acceptance rate is down to 3.3%.  Guess I had my peak year.

I haven’t written any new short stories in quite some time either, so maybe that’s part of it.  I’ve been trying to write them, believe me, but they’re not panning out.  I either choke at the ending, or the whole thing needs severe rewrites.  I’ve been working on my very long fan fiction or “Merm-8” or “Defender” or my dwarf novella (which I have no idea how to sell — no one seems to be interested in novellas).

And then I finished “The Martian” by Andy Weir.  According to its notes, it was published online first, then self-published on Amazon, since readers wanted it in an easier format.  Then kept getting traction until it was picked up.  And now it’s a frickin’ movie.

It makes me wonder whether or not it’s easier just to publish something online and let the readers come to me.  But “The Martian” had that something special that other books don’t — a load of whiz-bang engineering and problem-solving and true science.  But also, it never gained traction with agents, so dropping it right into the readers hands was the only way to get their attention, like Amanda Hocking, E.L. James, and John Scalzi.  However, if I do that, do I become untouchable to agents and publishers, because the book/story has already been released online, it’s now said to be “published”.

I’ve written similar things before (Milk & Honey, The Upgrades, parts of The Centaur Bride).  Whether or not I can write it well — enough to sell — I don’t know.  But I have no taboos or reservations about this kinda thing (lord knows I’ve studied enough materials) …  except that I wouldn’t put my name on it.  I’d use a pseudonym/identity.

And maybe it sounds selfish, but I want to be widely read.  I mean, me, Eric Juneau.  I want to make my mom proud and hold up my book and say, “See, I wrote this?  It can even go in the bookshelf with all your other books.”  I want to have weirdly drawn covers on mass market paperbacks with yellowing pages.  I want to be able to pull my book out of a bookshelf at Barnes & Noble and turn it out as if the booksellers wanted to feature it.  I want my kids to be able to say that daddy is an author.

Man, why’s this gotta be so hard?

*I sincerely doubt the majority of consumers of these books are women.