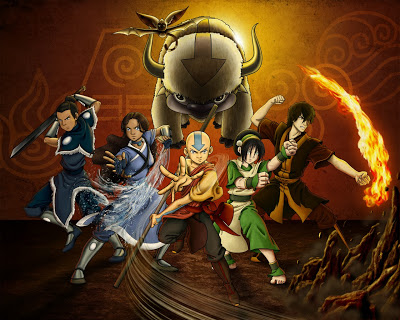 I recently discovered the joy of Avatar: The Last Airbender — a great cartoon with bad timing.

My first introduction to Avatar was on Nickelodeon. A channel that was most known for Spongebob Squarepants and The Fairly Oddparents. In other words, cartoons for stoners. Plus it came out around the time that James Cameron’s movie was big buzz, so I thought it was piggybacking on a known IP.

It was an “American-made anime” meaning it had that cheap-looking animation. Heavily Asian influenced style. Who is this main character that looks like the baby from Dragonball Z? With weird blue markings and he looks 10. Then the terrible movie came out and that did nothing to intrigue me to see the series. I never see Avatar cosplay in convention pictures.  And “airbender” sounds lame.

But Avatar never went away. There’s a ride at Nickelodeon Universe, manga at the book store. Legend of Korra came out. It was always an underlying presence.

Then the Nostalgia Critic started making his vlogs about it. And they kept appearing in the site updates, through the entire series, so he must have liked it. Then he made the “Last Airbender” movie review, which I thought was his best since his return. I’ve had hit-or-miss experiences when trying out the “Channel Awesome” recommendations, but a TV series doesn’t have to be a large time commitment or a Netflix queue occupation. And if I saw the series, I could appreciate the severity of the NC’s review even more.

I watched the first two, and they did intrigue me. It looked different than what I expected from the show. I especially liked the character of Zuko and his uncle — sympathetic antagonists. The story concept seemed easy to turn into a “go to city/people we never see again, save them from Zuko’s nefarious plot, rinse and repeat”. You know the kind of eighties cartoons I’m talking about. They usually have a shrinking episode or aging backward episode.

But Avatar left me wanting to see more and more. The characters developed differently than I expected. The plots had actual consequences with increasing stakes. It’s a serial, so I don’t think I would have hooked onto it when it aired (too impatient). But now that it’s over, I find myself missing the characters. Wishing there was more.

It’s a lot like Buffy. Supernatural powers, world at stake, no one taking themselves too seriously given the situation. Aang = Buffy. Sokka = Xander. Katara = Xander. Zuko = Angel. Giles = … Iroh? Okay, it’s not a perfect comparison. But Buffy is one of my all-time favorite shows.

It’s more than just a good kids show, it’s a great family show. Being on Nickelodeon probably killed that rep a bit, keeping away potential viewers. When people see “family show”, they (meaning me) think junk like “Free Willy” and “Once Upon a Forest” and “The Parent Trap”. Stuff that’s labeled as family, but really for kids. Full of saccharine plots and inoffensive material. No stakes, no conflict, and predictable as hell. Just a puddle of asinine goop that has a big “just doesn’t matter” banner.

Avatar shows that you can do a show with good foundational ideas (like Taoism and martial arts styles) and characters that are more than white knights and black wizards. Better than dinky romances and Steve Gutenberg co-stars. That you can have storylines with development, situations that don’t always reset, characters that aren’t perfect, and plots that don’t go where you expect them to. Someone like me is very interested in that — family material that’s not a “family” show or in the “children’s section”.

I won’t wax poetic about why Avatar: The Last Airbender is good. You can find that elsewhere. I just wanted to tell you not to let the things that stopped me stop you. If you’re judging it by the art style or merchandising or commercials, it’s not what it looks like. It’s not a good anime, it’s not a good cartoon. It’s a good show.