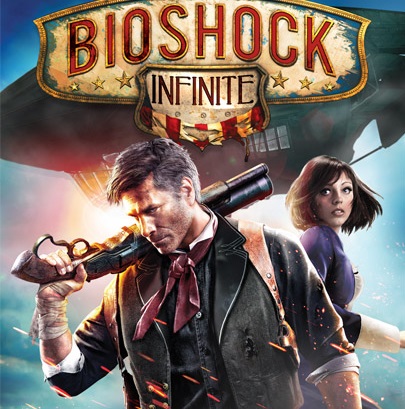 Hey, I’m not that late. Am I? Am I? I haven’t accidentally read any spoilers yet, so I must be okay.

After 10 minutes of benchmarking (gotta get that frame rate just right), I was able to dive in. The first thing that happens is you’re on a boat.

No, not that kind of boat.

Yes, that kind. Someone is rowing you out somewhere, and you appear to be in the middle of the ocean. I sure hope we launched from ashore, because these guys are going to have some tired arms. Given that we’re going to a lighthouse, that appears to be the case.

And immediately images of Bioshock 1 and 2 float in front of your eyes. Vast ocean, lighthouse, little-to-no idea of what you’re doing or why. There are some of the same trappings I mentioned in the previous games–things like jamming strange chemicals down your throat with windy caution. And there’s lots of wind in a flying city.

But for all that, I find it more enjoyable than the original. It’s a nice change from the horror movie style of Bioshock with mutated freaks, robo-giants with drills for arms, and infanticide. No binary moral choices, no faceless main character.

What I’ve loved the most about Infinite is that you have plenty of time to get to know the environment. World-building is tricky, especially for what’s basically a different planet/alternate earth. And the game’s tutorial level gives you plenty of time to wander around, read things, hear conversations, and introduce everything without overwhelming you. And it’s not boring because there’s so much interesting stuff to look at (although at some point I was wondering when I’d get something to shoot).  I feel like everywhere I go I’m missing something important, because there’s so many details. I want to experience all 31 flavors.

In Bioshock one, you’re pretty much thrust into jamming syringes in and killing psychos, but you don’t really get your motivation beyond “don’t die” until the end of the second act. And even then, you don’t know why/how you REALLY got there. Infinite has… less of this problem, but it’s not gone.

You get your reasons in flashbacks when you get knocked out. And that happens occasionally. Infinite is trying to dispense the backstory in snippets like in a movie. The problem is, this is not a movie. This is a video game. I’ve said time and time again, if I don’t know why I’m there, I can’t relate to the main character.

And that’s important in this game, because, unlike Jack, Booker DeWitt has a personality, has a past, has an identity. If the developers want me to be Booker DeWitt, they need to tell me who he is, why he’s there, what he wants, from the first second. And I really want to be him — the history I have gathered so far (Wounded Knee, Pinkertons, absent wife) make him sound like an interesting character. They certainly did better than Jack or Subject Delta.

But so far, motivation is my only big problem, and it’s very common in video games. They want you to get to the action instantaneously. Everything else still has that Bioshock flavor — isolated dystopia, guns and magic, philosophical themes. And I like the lighter color scheme, the Americana and earlier timeframe, the lighter environments. I think if you liked Bioshock 1, you’ll like Infinite.  And if you didn’t like Bioshock 1, Infinite fixes many things that went wrong, which makes it worth a try.