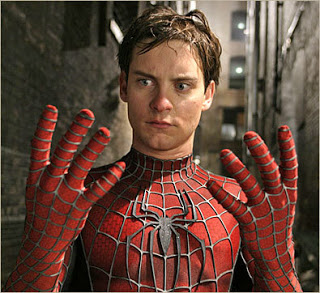 Time will not be kind to Sam Raimi’s Spider-Man. I have come to this realization. Its the Marvel equivalent of Christopher Reeve’s Superman. It lit the fuse for superhero movies, but hasn’t nearly the explosive power its successors will (X-Men, Iron Man, etc.). The movies were a well-loved phenomenom now, but the trilogy is finished. And a reboot is months away, only ten years after the first. Why?

I hardly need to say much that hasn’t already been said. Sure, they’re good movies. Sometimes great. Good casting. Well imagined. Fun special effects. And far be it from me to disrespect anything with Bruce Campbell in it. But Sam Raimi is the guy who made The Evil Dead, Darkman, and dozens of cheesy syndicated TV shows like Hercules: The Legendary Journeys. He is not used to big-budget productions.

But everything in it is comical. Sometimes comically good, like the upside-down kiss, to the comically bad, like Green Goblin’s outfit. There are so many moments that are just stupid, awful, or stupidly awful. Characters toss the idiot ball back to each other, doing things no one with a lick of sense would do, for the sake of the plot. That’s plausibility, my friends. That must be there, or everything falls.

I’ve never seen superheroes cry so much until SM3. Yeah, Sam Raimi’s trying to appeal to the humanity of these characters, but the first movie was the time for that. Maybe some of the second. But not the third. The thing that cannot be forgiven is that Raimi stopped being true to the spirit of the material. And the spirit of the material is chop-socky comic book action. It’s not Sandman lamenting over his daughter or Norman Osborn arguing with himself or Mary Jane being a bipolar pill. It should be called “Peter Parker, the Spider-Man”.

You know what people wanted to see through all three movies? Venom! You know what we didn’t see? Venom! I’m all for a writer staying true to his/her vision, but part of a successful work is giving the audience what they want. And the audience wants Venom. So what’d you do? You stuck him on that kid from That 70’s Show for a few bullshit scenes at the end. Fuck you, Raimi, for not delivering.

To me, it sounds a lot like the 1978 Superman. Good casting, fun special effects (for its time), but comical in all the wrong places. Lex Luthor, with his moll and single bumbling henchman, seemed more like The Three Stooges. Marlon Brando has fifteen minutes of screen time and as many lines, while eating half the budget. The bad romance with Buster Keaton Clark Kent. Plus all the things I find wrong with Superman in the first place.

So that’s why it seems to me that the Spider-Man movies will go down as a first try. A reflection of what it could have been, and what it will be.