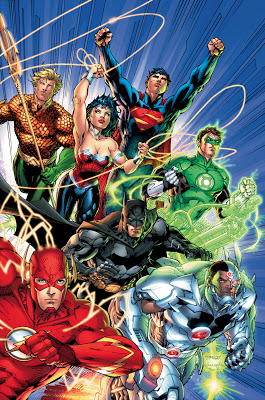 I don’t know why I’m making this list. I’m not a comic book geek. I’d rather read novels than the latest issue. And comics don’t seem like a good ROI for what you get. A novel costs ten bucks and takes a week to read. A comic costs $1.75 and takes ten minutes. Not much ROI, but I’m no economist.

But don’t get me wrong, I love comics because they create great stories and fantastic art. They are modern mythology, and I do loves me some mythology.

And now the biggest news is that DC is rebooting/remaking fifty-two of their central titles, including “Justice League”, “Batman”, “Superman”, “Wonder Woman”, and other characters. There are three quarters of a century worth of canon to draw from so there’s no excuse for messing it up. But I’ve seen this before. Remakes and reboots proliferate our days. Some have succeeded (Star Trek, The Karate Kid, Batman, X-Men) and others, not so much (Smurfs, Planet of the Apes, X-Men… wait, I mentioned that twice?).

DC’s getting a lot of flak with its initial changes, and rightly so. So here’s a list of nine things I think they can do to make sure they don’t screw this up. Why nine? Because I can’t think of ten. I do this for free, people.

1. Don’t repeat the past. The biggest kerfuffle about this reboot (thus far) revolves around Superman. For one, his marriage to Lois Lane dissolved. It never happened. People feel like they’ve been cheated because it negates the plot lines and character development they’ve emotionally invested in. Same reason the “it was all a dream” is so lame. This is a risk every time you make a reboot, it’s part of a reboot’s definition. But I think people are more mad that they’re going back to ground zero.

Superman’s attempts at romance with Lois Lane, Lana Lang, Lori the mermaid, and anyone else starting with L has been a staple of Superman comics since they started. The writers are going back to what works, because they know it works. It worked eighty years ago. You know what else worked eighty years ago? Segregation. And socialism. And prohibition.

You can redress it however you want to, but we are sick of seeing the same origin story over and over. A missile flies down in a cornfield, superbaby pops up in front of Ma and Pa Bland and lifts their car. For some reason, they adopt him instead of turning him over to the FBI because HE’S A FRICKIN’ ALIEN. Batman Begins worked because it was totally different. It told very little of the night of his parents’ murder and more about the transformation from orphan to Batman. Plus, science has changed. We know radiation will kill a spider before it gets a chance to bite you. Gamma rays don’t create Jekyll/Hyde men. DNA can’t be rewritten. And spilling chemicals on yourself will not cause anything but some nasty stains.

2. Put focus on old and mid-list heroes that have potential. I said before about how dull Superman is, but how interesting Supergirl is. Two very similar heroes, but a simple gender switch turns the whole thing over. There’s also Ultra Boy, who has the same powers as Superman, but can only use one at a time. And Mon-El, who has the exact same powers as Superman, but is invulnerable to Kryptonite (but vulnerable to lead, which makes life on earth difficult). And I’m not even mentioning all the super-pets and the clones/duplicates from the “Deat6h of Superman” run.

My point is, all superhero powers tend to blend together. The only discernible differences come from character. But that character can make a world of difference. I have no idea who Booster Gold is, but I keep hearing sniplits of him here and there. He must be trying to be pushed, but I have no idea who he is or what his powers are. From his brief bio, he seems like a knock-off of Iron Man. And there’s Blue Beetle, the precursor to Batman. All of these are original characters that exist in the mid-list. Try focusing on them.

3. Give them some real jobs. Can we all agree that the superhero position of journalist and multi-millionaire is fucked out? Sure, it gives plausibility to why heroes are always in the middle of a crisis, or get the money to pay for their gadgets. But A) it’s been done and B) we’re in the 21st century now. There are no journalists, but there are bloggers. There are teenage millionaires everywhere. Most jobs are at a desk or a computer. Why not a superhero who’s a nurse, a manager, a teacher, an accountant, a dentist, a farmer, a teacher, a writer? In “On Writing”, Stephen King said “People love to read about work. No one knows why.”

4. Ditch the secret identity.. Trailing on the heels of the one above, one of the most hacked plot lines comics use is having to protect the secret identity. It’s as cliche as a key change in a song. How many Superman covers have you seen where they tease revealing his identity to someone. It creates a false source of tension because of all the false alarms. The reader knows that it’s not going to happen.

Heck, if Superman didn’t have a secret identity, there’d be no plots at all. He’s basically a god. The only way you can make him lose something is if his identity is revealed or he’s got to be in two places at once. And both of these he always solves because he can go faster than the speed of light. Boring.

Plus, these days keeping a secret identity would be impossible. Look at Wikileaks, Abu Ghirab, LulzSec. The government can’t keep a secret. You can’t keep anything from the world’s prying eyes. Heck, look at how complicated the Portal 2 ARG was and how fast people solved it. Bottom line: secret identities are a crutch and implausible. And personally, I’d love to see how heroes get on with their daily lives as both a normal person and a caped crusader. That’s how TMZ works.

5. Character Redesign The best way to show that you’re serious about remaking a franchise is to change the character’s design. It’s easy to do, and sends a clear message that “EVERYTHING IS DIFFERENT NOW”, but can also cause a lot of controversy.

Marvel’s already done it with a half-Black, half-Hispanic Peter Parker. And boy did people get up in arms about that one. Personally, I love fundamental redesigns like that. I embrace the multi-cultural Peter Parker. I don’t believe Marvel’s doing it simply to be more “diverse” (I hate that word). I think they’re doing it because it’s something different. Here’s the key — the redesign must stay true to the spirit of the material.

For example, Superman got a new black outfit following his death. Yes, awesome. But they also changed his powers. Now bullets went through him, instead of bouncing off. Why? Bullets that ricochet send a clear message that he is an unstoppable force. Passing through him imply he’s not even there. He’s invisible, he’s a phantom. It’s stupid.

Also, ditch the silly eyemasks. Everyone has them — Robin, Green Arrow, etc. They worked in the 1950’s, they don’t work now. Do you remember in the 1950’s Batman when sometimes Alfred had to go out in the Batmobile? All they did was whip an eyemask on him, thinking that would protect Joe Passerby from going “hey, that guy in the batmobile. He looks familiar.” Seriously. They make you look like a western bandit.