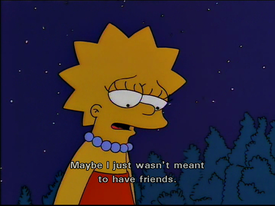 Books (science fiction mostly) – My college friends and I started a book club. I participate in it but A) we have to meet online because we all live far away and B) they’re already my friends. It would be great to meet with some other like-minded people to talk about books, especially science fiction, but take exhibit A. My wife tried going to a women’s book club for a few months in her community, for the same purpose I had (making new friends), and they spoke very little about the book. People who didn’t read the book would attend, and it was all an excuse to drink wine and diss on their husbands.

Video Games – The best times I had when I was a teenager was playing video games with my friends all day, eating snacks and drinking (either alcohol or strange sodas from the grocery store), then getting Taco Bell at 1 AM. These days, that’s hard to do, and the nearest Taco Bell is ten miles away from me. But it’s not impossible either. I own a Wii and a PC. Nothing would please me more than to play Left 4 Dead or some other co-op game with a friend. I’m sorry, but my wife just can’t keep up with me in games like Quake, and certain games give her motion sickness. When Portal 2 comes out, who will play the second robot with me?

DandD/Magic: The Gathering/Board Games – I admit I’m horrible at strategy games, but I love to play them. My wife always wins at any game involving territory. I can’t even win at Cribbage. Trivia games I’m good at, but the sole purpose of those games is to show off useless knowledge.

My point is, people like to play these games. And people need other people to play these games. It’s always best to play with like-minded people. So why can’t people get together to play games with each other? In UWEC, there was a “Gamer’s Guild” which now I am sorely sorry I never took part in. I really want to learn to play DandD — I watched the Penny Arcade DandD game at PAX in its entirety — but it’s one of those culturally assimilated games. You need someone to teach you.

So how do you find those people in a world of suburbanites? It’d be great if there was some kind of gamers club in my community. But there isn’t. I guess all the men and women are too busy building their ATVs, taking care of their five-year-olds, and watching “Dancing with the Stars”. Instead of doing something worthwhile like saving the world from an alien revolution.

Watching movies – I do likes me some movies. I have a Netflix account that I have no intention of getting rid of any time soon. Thanks to the dynamic duo of DVDs and something called the “post… office” (am I saying that right? How long has this been around?) I’ve seen so much great stuff that I never would get at my local Blockbuster.

But I can hardly get to the theater anymore. And when the DVDs are released, it usually takes a month or so for my Netflix queue to get them into my eyeball sockets. The other thing is, how do I incorporate this into a multi-person activity? I guess you could do like a book club — watch the movie, then discuss it — but the idea of a bunch of film snobs in a room turns my stomach. I like The Evil Dead just as much as I like Inception. My favorite thing about movies is quoting them. And then beating all my in-laws at Scene It! single-handedly.

Writing – This is my favorite thing, but writing is a mostly solitary endeavor. I know there are at least two writing groups near me right now. One for my library, and one via MeetUp.com (I’m assuming these aren’t the same group). I don’t know if any of these will lead to me making new friends, or making the kinds of friends who also like zombie movies and role-playing games. However, I have two things going against me.

One, I take my writing seriously. And when it comes to criticism, I show no mercy, because those editors certainly aren’t. It’s a 98% rejection rate on a good day. And sugarcoating things does nothing to improve the craft. When you submit your work to be critiqued, you must be able to handle criticism, snarky or not. As you can guess, this kind of behavior does not make friends.

Two, authors recommend that you stay away from writing groups. They say these people only meet to give themselves a group hug and avoid the reality that their crap stanks. These people are not agents or editors, so why would their input be of any good to you? They’re on the same level as you. Now I know the feedback of others is useful in seeing things that you yourself can’t, but I already use Critters. Meeting people face to face is needless and can prevent you from getting the unbiased criticism you need. Now I could join a writing group for the purpose of making friends rather than seriously honing my craft. But there’s also a certain dedication of time you need. But I suppose any making of friends would need a dedication of time.

There’s also conventions. I’ve been trying to find writing conferences in the MN area, but I haven’t been successful so far. But I have found some sci-fi conventions. One of them is Mini-Con, the other is CONvergence, which I’ve heard of, but had no idea was in Minnesota. God, I’m ignorant. Now I’d love to go to something like this, but there’s a big problem, a big obstacle that tugs at my heart and pulls me back from associations with, as I keep saying, like-minded people.

As I discovered, and wrote about in my Renaissance Fair Write-Up (which is one of my more popular posts, probably thanks to the picture of the girls with the boobs), large collections of assertive geeks are not good for my introversion. There’s something weird about all these people in costume and acting the part. It’s like they have a tenuous grip on reality, not sure whether they’re their character or not. Or maybe the tenuous grip on reality is mine.

In photos, it looks glorious. It looks like so much fun to go and party with these people, play video games, watch movies, go to panels. But I have kids. The whole point of a place like this is to have the freedom to go and explore, but I am shackled by naptimes, feeding times, and boredom-instigated whininess. And then it’s weird to go to panels and events alone. If I go with my wife, I’m sure I’m going to be worried the whole time if she’s bored. But I might still try this year to go to a con.

So that’s why I can’t have any friends. Why doesn’t anyone else like this stuff? Are geeks still so much in the minority that you can’t talk to an average person about the new internet browser or the latest episode of “The Walking Dead”? I can hang onto the hope that my girls might grow up and become interested in this stuff, but it won’t be the same. There won’t be any Taco Bell runs at 2 AM with my daughter. That’s not good parenting. I guess I’ll just wait.