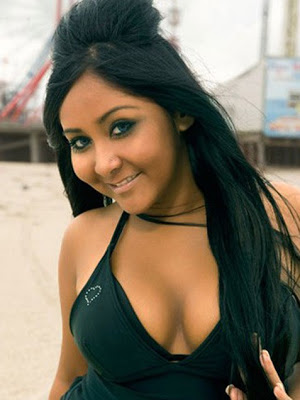 Anderson Cooper’s a smart, witty guy. I should be watching more of him. But to the subject at hand.

When I saw this, really, I was trying to be more outraged. Toni Morrison is at the same level as some white trash clubber with a ghost-written book? (Editor’s note: I haven’t read Toni Morrison or Snooki) She earned $32,000 for speaking fees? Someone who’s done no work, suffered no art, gained no skills?

But really, I just don’t care that much. For one thing, this is just par for the course. Beautiful train wrecks are a staple of the human diet. Before our meals were limited to celebrities, since they were always in the spotlight.  Zsa Zsa Gabor and Truman Capote wouldn’t have been so famous if they weren’t such boozing, violent loudmouths. Now everyone can be. Snooki’s just another in a long line.

The fact is that there are plenty of Snookis out there. I saw a lot of them in high school — people who can live a carefree life, regardless of consequences or endangering relationships, who can drink and smoke to excess and get up the next morning with no effects. Kardashian charisma and good looks. A princess-like lifestyle of doing absolutely nothing. We’d all like to be that person, but if we’re not, we hate them. Not out of jealousy, but because we’re the target of their lack of foresight, and we have to pick up the pieces. It’s safe at the eye of the hurricane, but not anywhere around it. I call it the Tony Stark effect: it would be awesome to be Tony Stark (Iron Man), but no way would I want to be his friend.

Of course, it’s ridiculous that anyone is paying Snooki to do anything. She has no skills, she has no value as a person, she’s not contributing to society. But it’s all just temporary. The brightest flame burns quickest, and the Jersey Shore is a fourth of July sparkler. You’ll enjoy watching her flame extinguish as she continues doing more outlandish things to get attention. We used to call these people the “village idiot” or “motley fool”.

No one would be paying attention to that show if she hadn’t gotten punched in the face (and the fact that her name is fun to say). Look up “Streisand Effect”. The only thing that disappoints me is that it’s given a renaissance to reality TV. I was hoping it was on the downslope, but the shore’s induced  brief upsurge now.

I’ll admit I’d be pretty pissed if I was a Rutgers student and found out that $32,000 of my tuition went to fund Snooki’s orange hide. But take comfort in knowing it won’t be long before we see her in Celebrity Rehab, The Surreal Life, a sex tape, or some other place for washed-up, burnt-out fifteen-minute-of-famers. If she’s not a gutter corpse by then.