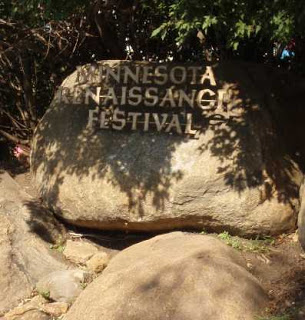 Last weekend, I went to the Minnesota Renaissance festival. You’d think I would have gone to this a long time ago–I love fantasy. But the opportunity never presented itself. First there was no one to go with, then a wife who wasn’t really into fantasy, then children. But now I’m instituting my policy of being more aggressive, and I said, “this year we’re going”. I had a list of things I wanted to do, as recommended by friends, and we set out.

One thing I didn’t count on was the people being so assertive. They really throw themselves into their role, and they’re not shy about it. I, however, am shy about the role I choose, which is normal everyday citizen attending a fair. Said fair apparently takes place in the twilight zone between economical money exchange and putting on a cape and pretending you can fly. With more disassociate identity disorder.

I gotta say, the walk from the car, until we made it to a somewhat open field, I was truly seizing with tension. There were a lot of people walking around in costume. I couldn’t tell who was staff, who was play-acting, and who was both. There’s no uniformed ticket-takers or security. And everyone’s talking to everyone like it’s a theme park. This makes me nervous. 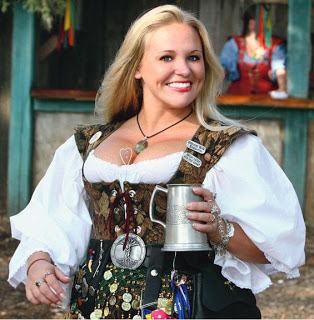 We got there at the opening, so there was a dense crowd getting in, and there were a lot of people saying hi and doing silly things. The entrance was formed like a castle, and people were calling out things from the parapets to the people passing in. There were some people holding puppets with a fishing pole with a pacifier on the end to the children, calling “Here, breakfast”. And it looked like my daughter was going to fall for it for a second.

Now on one hand, this is why I wanted to come to Renaissance Fair. This is hilarious. This is stuff you don’t see anywhere else. And you won’t, unless you come here. On the other hand, someone is trying to kidnap my daughter, and half-insulting her in the process. I have troubles with my suspension of disbelief.

Anyway, this is a pretty common theme throughout the day. People talk to you like they’ve known you all your life. Or like they’re drunk. They’re extremely friendly, extremely personable. They want to you to participate, not just spectate. Everyone calls out their wares like at an old-fashioned bazaar, and all performers expect a tip, even ones that happen in the middle of the path. Unfortunately, I am 100% introverted (it’s true, I even have the certificate). So this does not sit well with my comfort zone. 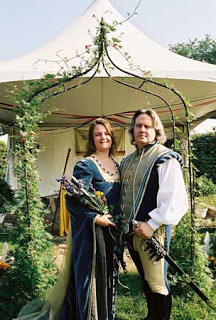 But once I got past the crowd and had a chance to reorient, it got a little better. The first thing I wanted was to eat. And I wanted a turkey leg. I heard the Ren Fest is famous for the turkey legs. Yes, it was 9 in the morning. I don’t care.

So I got my turkey leg, and we studied our map, trying to figure out what the hell was going on, where to go, and what the name of all these stages and performers meant. If you didn’t know who Puke & Snot were, or that they’re the most popular act of the fair, you might not be going. The turkey leg tasted good, but it had a lot of gristle. And I felt like it was bad etiquette to spit it out on the ground. The lassez-faire environment seemed to say it was okay, but my kids and wife were watching (I can’t do anything fun). 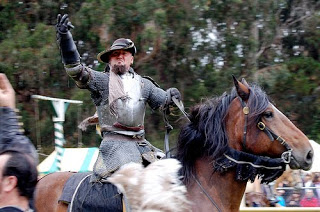 As I ate my leg, we wandered over to what we thought was the children’s area. There they had free fairy wand-making (this is important because my wife is cheap conservative with spending money on recreational activities). So we got my daughter a wand, and a little monkey balloon animal to put on top of it. This became her favorite thing ever. Do not take it away from her while in Ren Fest. You will lose an arm.

Seeing nothing too interesting in the supposed children’s area (I’m not sure this was a children’s area, things are not marked well), we moved around a bit, looking for interesting things. We tried to decide on some shows to see, but there were so many, and few with descriptions, that it was hard to decide. It was at this point I wish I had gone with someone who knew the fair better than I. Who had been to the fair and knew what was good and what was bad.

Anyway, we realized that we were close to a stage with a fire-dancing show about to start. So we figured this would be a good place to sit, observe a performance, and feed the kids a snack. We had some time to kill though. I found a weird door marked “The Mysterious Forest” (or something like that), placed somewhat behind the fair. Now I wanted to approach this day as something where I’m free to explore, to find surprises and things you didn’t expect. That’s the fun of it. So, I took my daughter down this thing, not knowing what it was. Apparently, it was a forest path. There were some little fairy houses scattered around. I liked it. This is what I was looking forward to–an escape into a different land. And the best part was I could show my daughter it all. 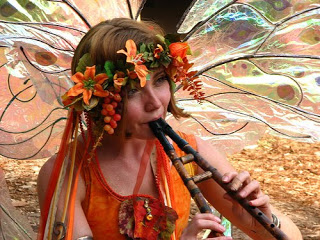 So when we done with that, we sat down for the show. Shortly before, someone titled “Seamus the Insulter” came up to someone, congratulated him, and told him to prepare to be insulted. Then he said some generic things like that “is that your head or did your neck throw up?”, but in more fanciful speak.

After that, the fire-dancing show started. The part I liked the most was the music. And one of the girls was real cute. I can’t say I was really impressed with the performance. You can bathe your arms in fire no problem if you treat it with anti-burn gels. And the men dropped the fire-sticks quite a few times.

After that, it was time to get some mead. The one thing I always heard when people talked about Ren Fest was turkey legs and mead. Turkey leg had been taken care of. But where to find the mead? I thought I’d find them at the pubs, but no dice, just wine and beer. And dice. So we had to/got to a wander a bit while I looked for someplace to sell me alcohol. And here’s where I realized the best part of Renaissance Fair–there are boobs everywhere. Every woman, fat and thin, the tall and the small, are wearing tight corsets, laced-up bustiers, and their breasts are up around their necks. Thank you wife, for letting me borrow your sunglasses. 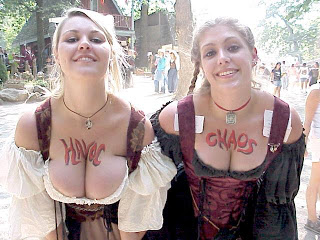 To Be Continued in “The Renaissance Fair Write-Up, Part 2″…