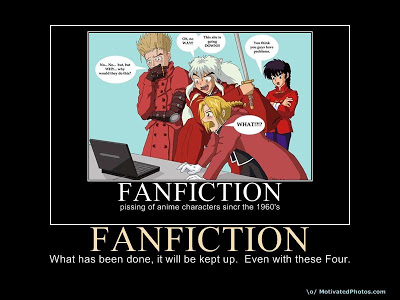 And now it’s time to premiere a new feature here at the AuthorQuest blog: Featured Fan Fiction of Flippin’ Whenever. This is where I take my little corner of the web to feature some of the unsung writers that have influenced me. You won’t find any book deals or agent contracts in these guys’ closets. Oh no. They do it for the love. For the fame. For no reward other than the sheer joy of the act. And reviews.

My history with fan fiction started with Star Trek and America OnLine (also known as AOL). I was really into Star Trek: The Next Generation and I was really into reading. And I loved to combine the two. At the time, the only way I could get more Star Trek stories was the Pocket Books series of mass market paperbacks at the library. And boy, was their quality lacking. One of my big regrets as a writer was spending so much time reading licensed drivel than real science fiction must-reads. Now I have to catch up.

But then AOL brought forth their bounty of network. And the homo habilis of what would be the Internet forum. Said Internet forum let you download piles and piles of fan fiction. And piles there were. All around my bed, in drawers, in boxes, and in the closet. I would queue up a bunch of files to download, and then leave it connected to the computer for about an hour (this was when it took as long to download a 256K file as a 50 MB file today, plus this was when AOL cost $X per minute, and I just left it on the hook). Then I would regularly give my dad a “print disk” to take to work and print everything out. Lord knows how he wasn’t fired. (One time I had him print the entirety of Les Miserables, which is 570,000 words long.)

Here’s what was great about it. Pocket books, and other publishers, have strict guidelines about what you can and can’t write. Everything goes back to normal at the end, people can’t act out of character, no one can die, large juicy events can’t happen. But here, you can have Wesley Crusher fall in love with both Lal (Data’s android daughter) and an ex-Borg (and this is before becoming ex-Borg was trendy). Find out that the Klingons were once a divided race. Have Worf fight the Predator. Bring Kirk back after Generations. Copyrights be damned!

This was before e-Readers, and I didn’t want to spend hours on the computer reading. That was time for downloading. I’m sure I killed a large tree with all the printing. I had three piles by my bed: fiction A-M, N-Z (it was originally one pile, but it got too large), and non-fiction. This was stuff like ship logs, references, quotes, and other things that weren’t quite stories.

Of course, eventually, AOL gave way to the world wide web. And this was a good thing because I was getting tired of the Star Trek scene. And Star Trek was the only section of AOL I liked that had any fan fiction. In fact, Mortal Kombat was the inspiration for my first serious attempt at writing. See, the problem was that AOL’s Mortal Kombat boards didn’t have any fan fiction, and I desperately wanted some. Then I decided, “Well, if no one else is, why can’t I write some?” I figured I could be a big fish in a small pond. Then, once my Internet universe expanded to the WWW, I discovered I wasn’t as big a fish as I thought. There was Mortal Kombat and Final Fantasy and Evangelion and Legend of Zelda and Trigun and Cowboy Bebop and Les Miserables and all sorts of other things. It opened my eyes to writing that was beyond huggy-buggy Klingons and Riker/Troi get-back-togethers. That’s the best thing about fan fiction, its one advantage to published fiction–there are no limits.

The problem with no limits is that it yields to Sturgeon’s Law–90% of everything is crap. But the corollary is “the other 10% is worth it”. The problem is that it’s virtually impossible to find that 10%. Even FanFiction.net doesn’t let you sort or search by reviews, ratings, or anything like that. I painstakingly counted how many times each story appeared in favorites lists, page by page, to figure out which stories were the most favorited, in order to read the best. I guess I figured wasting my time on infinite tallying was better than wasting time reading bad fics. Time is short.

And so I bring to you my favorite pieces. These are the stories that inspired me to become a capital-A author. There’s gold in them thar hills and no one knows about it. So, here is some gold. Please feel free to bite into it, to ensure that it’s real.