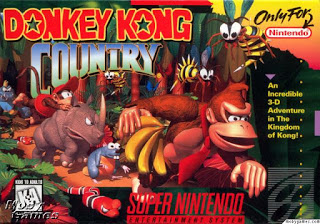 Donkey Kong Country gave us the full potential of the SNES. It gave fully rendered 3-D graphics, not two-dimensional sprites with frames of animation. Donkey Kong moved smoothly, fluidly, and it brought back an important character in the Nintendoverse.

I knew this game would be the epitome of the SNES, so I desperately needed it. Maybe the intense marketing campaign got to me. During Christmas, every night I’d say, without provocation, “Did I mention I wanted Donkey Kong Country for Christmas?” It was highlighted, starred, and circled on my Christmas list. I’m sure it drove my parents nuts, especially coming from a twelve-year-old. I don’t recall ever being so obnoxious over a gift, but I have not abused the privilege since (except for a NES back in the day, but that’s a different story).

The game looked beautiful. It felt beautiful. I thought there were too many cavern levels, but the water levels were exquisite. I thought they were the best graphically rendered levels, with the least amount of pixelation and anti-anti-aliasing (that’s the opposite of anti-aliasing). There were distinct differences between Diddy and Donkey Kong – you felt the weight of each as they jumped. And although DK was the star character, it was easier to play as Diddy because of his litheness (although sometimes his inertia got the better of him).

This game is a basic platformer, you jump around, bounce on enemies, and navigate mazes, with one exception – the bonus stages. There are two to four in every stage and contain extra lives, or ways to get extra lives, which are really the only reward you can get. With all the bonus stages, you might think the game isn’t as challenging, but the challenge comes from finding each one. Completing each level and each bonus stage nets you a completion level, up to 101%. The game’s great graphics, easy play control, and soft music also contributed to its replay value.

But there isn’t much story there. Sometimes I’d go into my empty banana hoard just to give myself some motivation to trouce King K. Rool. Beyond that, there isn’t a lick of story until the final boss (although I did enjoy the “I’m not quite dead yet” suprise). Donkey Kong Country 2 (which I bought) and Donkey Kong Country 3 (which I did not, as I was sick of the repetitious games) enhanced the bonus levels and added Dixie, who, with her helicopter hover, made the gameplay a little less challenging, but currency, DK Coins, and the lost levels made up the challenge and kept the game interesting. But again, it added little story. So this game wasn’t one of my escapes, but it was still damn fun to play.