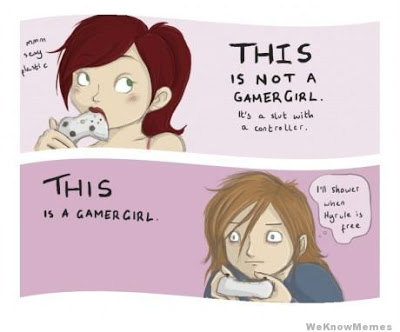 I decided I needed to write this because I’ve been playing Half-Life: Episode 1 again, testing out my snazzy new computer’s capabilities. And I have the Developer’s Commentary on, which I love. It increases replayability, and gives you incredible insight into things you may have missed, and how a video game comes together. The things I’m most interested is in how it’s written — how do you create exposition in an interactive story, and how do you create characters you care about. One of those, one of the most popular women in video games today, is Alyx.

A great deal about the thought that went into Alyx. When most people these days want to talk about good examples of women in video games, the smart ones point to Alyx. The stupid ones point to Soul Calibur IV.

I’m learning about the thought that went into crafting Alyx, as she played a big part in Episode 1 and stays with you almost the entire game. The gameplay had to avoid making her A) an annoying Navi-esque prodder B) too slow and thus a hindrance to progress C) a robot with a gun. Escort missions are one of the worst gameplay elements. Half-Life did it right. It took story breaks to let you know Alyx is a human, and thus create a bond between her and the player.

A good woman is a good character, not a Red Sonja/Wonder Woman warrior amazon and not a damsel in distress. Alyx is not defined by the fact she’s a woman. She doesn’t do anything that only a woman would do. She doesn’t act like how a stereotypical woman acts. For examples of that, watch any television commercial.

But that doesn’t mean a writer can ignore the woman factor. That, like everything else in her life, makes up her character. It’s part of her past, but it does not define her. It’s part of the recipe. If you substitute man for woman, you’d get a similar Alyx, but not the same Alyx (I guess that’d be Alex). And you may have substituted salt for sugar. Might make the recipe unpalatable or it might not make much difference. But its change will have an effect.

When I write women, I try to make that part of her character incidental. Influential, yes, in small ways, but not the defining characteristic. My last story (Merm-8) didn’t have much focus on women (only two female characters — only one of which is central, and really, only half a woman). It would have failed the Bechdel test, even though it is feminist (at least it tried to be). But my next story will have lots of women and girls. It will succeed. I think the Bechdel test is important to keep in mind when writing stories, mostly for the spirit of which is intended — that 50% of the world is women, yet they are underepresented in media. It is not the goal to center attention on a woman, but to make them characters just like you would do with men. Not Smurfettes.

I don’t want a character that’s defined by her presence, but by her motivations. She is a person first and a woman after that. A person with characteristics/traits that tend towards womanliness (is that a word?). I don’t characterize her by her body or her boyfriends or yogurt or being inept with technology or doing laundry things. I give her interests and traits universal to any person. Then I layer a thin sheet of woman on it — a little more emotional intensity, a little more nurturing, more connectivity with people. She’s not aggressive and violent, she’s not a linear thinker, not a constant crier, not so goal-focused (though goals are important and necessary, they are less tangible). A Barb Wire, high-heeled, cold warrior bitch is not a woman. It is a woman doing an impression of a man doing an impression of a woman. It’s a fantasy — unrealistic and implausible.

Take Hannah Hart for example, I’ve talked about her before, how much I love her and her funny. She’s also likes girls, and I had no idea about that. I didn’t even get a clue until her first second season episode when she was talking about Charlize Theron being on Top Chef and wanting to marry her. And yes, because I’m human, I had to stop for a second and think “what did she say?”

But the fact is, it doesn’t matter one damn bit in her videos. Because she’s not being a lesbian, she’s being a drunk, inept cook. She’s funny, cute, awkward, charming, winky, drunk, and lovable. It’s not like she’s those things despite being a lesbian. She is those things because that’s who Hannah Har is. They’re all part of the recipe.

I originally thought of this because of hearing this old laundry tag chestnut on the radio.

Doesn’t mass media realize that times are a-changing? The fact is, this just isn’t funny anymore. Not because it’s offensive. It’s not funny because I don’t get it.

I do all my own laundry because if my wife does it, she’ll screw it up. She’ll put my underwear in with my pajamas or won’t run the dryer until the clothes are actually… you know… dry. But that’s fair, because every time I do HER laundry, I screw it up. So we just do our own.  It’s stupid to think that woman are there just to make laundry or sandwiches.  As much as I’d like a personal slave, marriage doesn’t work that way.

At this point, this kind of humor is simply lazy and dull. Not only has it been overdone, but it has no meaning anymore, like what a tar baby is.

UPDATE 2: Foz Meadows wrote some interesting stuff in the comments that I think is worth repeating (edited just a little bit for readability, let me know if you think I changed too much):

In order to write real women, you don’t have to deny them femininity. Women aren’t demeaned by their participation or enjoyment of traditionally feminine things/behaviors — what demeans them is the idea that doing so makes them lesser people.

Wearing pink, crying, and shopping are stereotypically feminine behaviors, but that doesn’t make them unrealistic. More importantly, though, they’re only seen as negative behaviors because we associate them with women. Thus, men who shop, cry, and wear pink are also belittled for being feminine.

This is a problem, because it tarnishes femininity by association — it makes us think that the only way for women to be valued or to rise above patriarchy is, in effect, to stop behaving like women, or doing things associated with women. But even so, woe betide us if we act in too masculine a manner. Then we’re just being sexless imposters. Which only leaves us with gender-neutural things to do and be, and really, that’s an erasure of womanliness, not a way of encouraging it.

• Women who behave in stereotypically feminine ways are not inherently less narratively interesting, worthy, or human than women who don’t.

• A woman with some traditionally feminine characteristics (say, a love of shopping) can still be a kickass warrior. These things are not mutually contradictory.

• Women are whole and multifaceted human beings whose gender can define them in important ways without being the sum total of their identities.

• Female characters don’t have to be wholly likeable to be interesting and relatable. All too often, people shy away from writing women who are anti-heroes, difficult, belligerent, grumpy, or otherwise flawed because culturally, we’re conditioned to see women who act in those ways as bitches (always a pejorative) and therefore undesireable, even though we exalt male characters for exactly the same attributes.

I think that second to last bullet point is the most important. And it’s what I was trying to communicate all along: being a woman is one part of the recipe. It should not be their whole identity, as is the case with The Chick.

And Anonymous (that guy gets around, I seem him or her posting everywhere. Sounds like a Greek name.) sent this link to a nice essay about the “strong, independent, warrior woman” persona and how it actually undermines feminism because, while people claim to want strong, independent women not defined by a man, it limits female characters to a single type. Diversify!

UPDATE 3: Since I’m getting so much flak for these bullet points (if you’re fresh coming here, I had a bunch of bullet points up here regarding writing tips for writing women characters), I’m taking them down. Not because I believe they’re wrong or that it’s the fires I’m putting out are overwhelming, but because I DIDN’T WRITE THEM. These are not my words, they are the words of OTHER WOMEN, and I am not going to get flamed for someone else’s crap.

But what I will do is put these up at a later date so we can all discuss them, whether they’re right or wrong, since I don’t want them to get confused with my actual content above. ‘Kay? Kay.