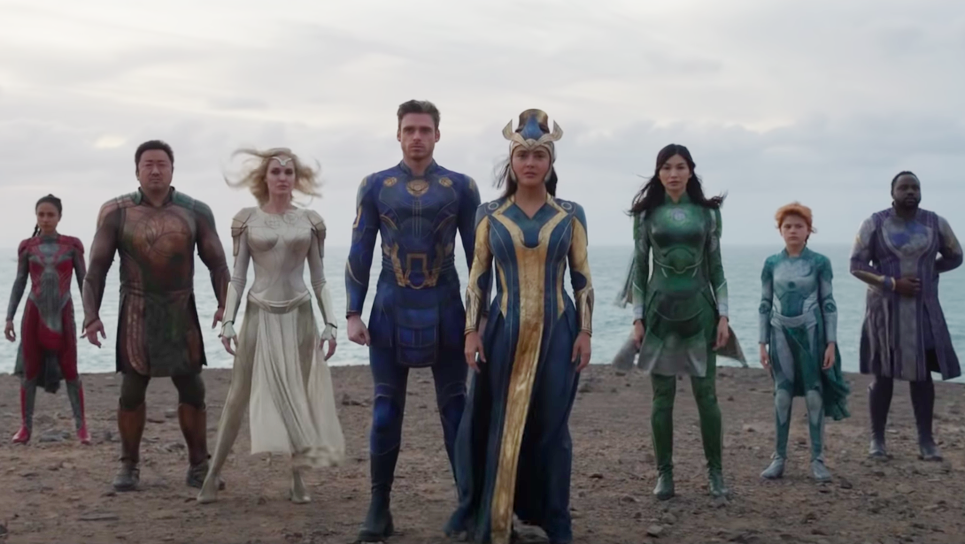 Since I talked about Eternals when the trailer first came out, I figured I’d circle back now that I’ve seen the movie. I’ve got to admit, it was better than I expected, but it’s not without faults. Does it deserve to be the lowest-rated Marvel movie? (48% on Rotten Tomatoes) It should live in that pool, but lowest doesn’t mean worst.

I was surprised at how good the storytelling was for an ensemble cast. I knew everyone’s names and identities and personalities. I know it’s hard to tell a story with more than one main character. That’s why so few stories do it. X-Men was able to do it, but A) everyone already knows those characters B) they were only able to do it for so long before falling under the weight of its own cast (i.e. X-Men: The Last Stand, X-Men: Dark Phoenix).

Other superhero team movies fell under the same weight (Justice League, Suicide Squad). And there’ve been other duds like Crash and Magnolia. You need something the length of Lord of the Rings to really explore each character fully. The others are either comedies like It’s a Mad, Mad, Mad, Mad, Mad World, Tropic Thunder, The Royal Tenenbaums or heist/capers like Ocean’s Eleven and Pulp Fiction.

This movie did… okay. Not great, but I saw each character had an arc, goals, problems, and conflicts. They were fleshed out and that’s hard to do in two hours, so I give points for trying. The most memorable are of course Kingo (Kumail Nanjiani), Thena (Angelina Jolie), and Makkari (Lauren Ridloff).

While I’m on the subject, I think the casting was spot on. I don’t know how they do it but Marvel movies always nail the right actor in the right role. It’s an understated skill, but kudos to whoever’s in charge of that department. It’s almost expected for a Marvel movie to have great actors, but I think Eternals still deserves a shout-out. Case in point: I didn’t know that was Angelina Jolie.

She’s one of the most recognizable actresses in Hollywood with her lean face and thick lips and big eyes. But she fell into the role so well I didn’t realize that was her. I hate actors that just play themselves over and over–Brad Pitt, Matthew Broderick, Samuel L. Jackson, Kevin Costner, Nicholas Cage.

I like the diversity too. There’s a Hispanic, an Indian, an East Asian, a West Asian, a Black LGBTQ, a Peruvian, a deaf Iraqi, and so on. The idea that the legends of old–Robin Hood, Gilgamesh/Hercules, Buddha, Houdini, etc. And they’re not just all white people.

At first, I thought the idea of godlike beings ruling Earth from the shadows seemed like it was ripping off so many old science fiction tropes (not the least of which is Star Trek’s “Who Mourns for Adonais?“). And the conflict of values within this team is a solid premise.

I don’t like how they handwaved the Thanos thing, but I guess “just following orders” has been the excuse for many a disaster. But there are consequences to not everyone sharing the same viewpoint. They actually have a civil debate where they explain their sides. Like Greek gods bickering. Kingo actually chooses not to fight. Sprite chooses a side not because of her personal beliefs but because she likes the guy on that side. They split up in the beginning because their mission’s over, then they split up again because of their differing viewpoints. It’s like instead of a found family, they become a re-found family.

So the story’s good, but the presentation sucks. Everything is in the dark. All the colors are muted. The monsters are all black. Every fight takes place at night or on a cloudy day in the middle of the woods. I can’t see anything because there’s no contrast.

I mentioned this before about the trailer, that the colors looked so blah that the movie itself looked lackluster. Like a dull rock. It’s a comic book movie, guys. Be bright, be bold.

And like the colors, the action is dull as dishwater. It’s just punch-punch-throw-bite. Compare it to The Suicide Squad or John Wick or Watchmen. Those are good action sequences because they use fight choreography. They use the environments. The fights in this movie (and they’re all fights; no variety like a chase or escape) are uninspired. Like someone just wrote in the screenplay [FIGHT GOES HERE] and let the special effects team go to town.

So do I recommend Eternals? I think it’s completely skippable. I don’t know what Marvel’s future plans are, but I didn’t see much connection between current works like Spider-Man and Loki. The end credits scenes are about new upcomers. It seems like this storyline takes place in the “space realm” where Guardians of the Galaxy and Thor live. But there’s no connection to either of those franchises at this moment. So you only need to watch this if you’re a completionist.