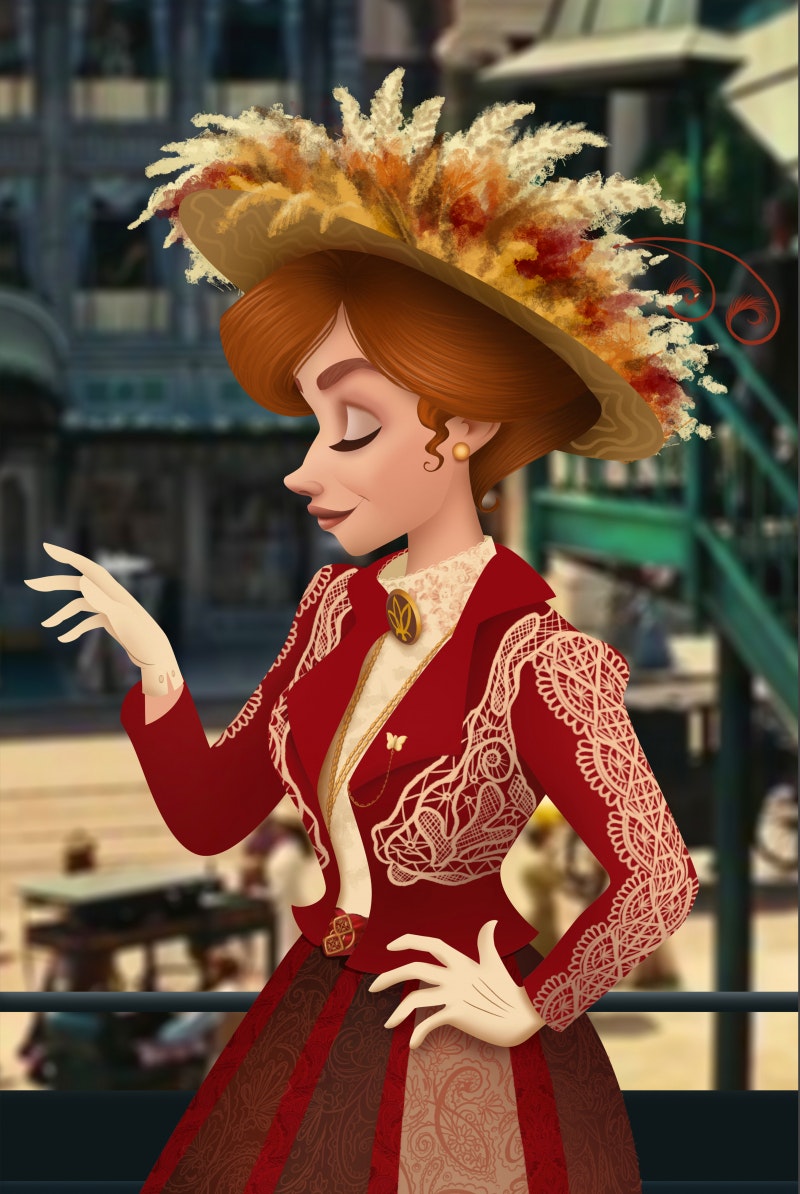 Dolly is a jack-of-all-trades. She can do anything–drug running, body disposal, theft, driver, pickpocketing, counterfeiting, surveillance, con jobs–anything you want she can get it. She works for all the families. Everyone in the community knows her and loves her, even though she’s not a don. It’s kind of like Homer’s organized crime fantasy in “Last Exit to Springfield“.

No matter what, you can always call on her to take care of it. But Dolly wants a permanent position as an underboss, and only one man can give it.

Enter Vandergelderelli, an elder mob boss who’s too stupid to quit and too stubborn to die. He has a job for Dolly–take out Lady Molloy, his chief rival for the Yonkers territory. And he wants it done at the wedding of his daughter Ermintrude at New York’s Il Harmonio to show the other families that Yonkers is his now and forever.

But Lady Molloy is Dolly’s best friend. They were associates in the streets of New York together, known as the Hatters. She sings about this conflict to herself.

Two idiot cronies of Vandergelderelli, Cornelio and Balbino overhear Dolly’s lament and decide they can do the hit themselves. This’ll promote them big time, showing they can do something Dolly can’t. They’ve never left Yonkers (Vandergelderelli keeps them under tight wraps), but they can’t stay forever.

What they don’t hear is Dolly telling Vandergelderelli that Molloy isn’t the top boss of her family. The real puppeteer is Ernestina–a politician/business mogul. She’s the one pulling the strings. Take her out and Molloy’s entire empire goes with. (Of course, there is no Ernestina and Dolly doesn’t know where she’s going to find one).

Molloy and her consigliere Mina run through a typical day as a don, hearing requests, carrying out punishments, extorting men of power. But she wants out. Being in the mafia has taken away her family, her friends, shot her dog, and stole her bible. But her empire is too big to just up and leave. If her enemies don’t find her, her friends would.

Cornelio and Balbino follow Dolly to New York. “Put On Your Sunday Clothes” means something different in this context. Hoping to make a name for themselves while they’re there, they use money stolen from their boss to go to strip clubs, break cars, bribe cops, etc. (You know, stuff you can do in Grand Theft Auto).

During their spree, they stop at a hat shop and try to extract some protection money, not knowing it’s the headquarters of Lady Molloy. She immediately realizes they’re incompetent nobodies, but since they have no name, they’re the perfect stooges to carry out a fake hit. Cornelio and Balbino aren’t so sure about this. They’ve always been petty thugs. They’ve never killed anyone before. “And you still won’t”, says Molloy.

But before Molloy has a chance to give them the details, Dolly and Vandergelderelli come to call, since it’s traditional for a don to pay their respects when in someone’s territory. Cornelio and Balbino hide and are almost caught (especially when Vandergelderelli demonstrates his prowess with a tommy gun). Dolly claims that Cornelio may be a low-level enforcer in Yonkers, but a top capo in New York. Yonkers is just where he lays low. Vandergelderelli barely believes it and says the next time he sees Cornelio, he’ll get the kiss of death.

Meanwhile, Dolly arranges for an actress friend (one she did some favors for) to pretend to be Ernestina.

Everyone meets at Ermintrude and Ambrose’s wedding. There’s pomp and circumstance, as in the movie. Vandergelderelli figures out that Ernestina’s not the real thing. Dolly tells him that she’s not working for him anymore because he’s a boorish crude man who gives a bad name to the name of organized crime.

Cornelio chickens out and fails the hit. But Vandergelderelli succeeds, with his tommy gun. A riot breaks out. Cornelio, Balbino, and Mina all escape, taking the body of Molloy with them.

The next day Vandergelderelli wallows in his crapulence, his enemies dead, though at the cost of his daughter’s happiness, his friends, and so on. But then Ermintrude, Ambrose, Cornelio, Balbino, Lady Molloy, and Mina all show up. They stab him in a Julius Caesar-style assassination and leave him bleeding on the stairs in some symbology of a fallen king.