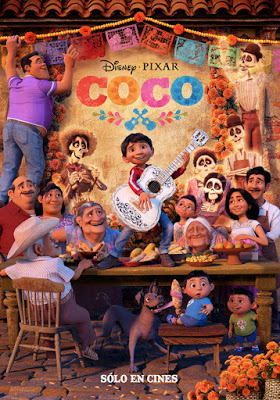 I saw Coco this weekend. Good movie, emotionally comparable to Up. Seems predictable though (even my eight-year-old told me she’s sick of stories where someone good turns out to be someone bad e.g. Frozen, Toy Story 2, Up, Monsters, Inc., Wall-E, Toy Story 3, etc.) But there was a thing that bothered me — a thing that ruins the movie experience (besides the four year old behind me who can’t shut up and shouldn’t have been taken to a movie if he can’t stay quiet).

Before the movie, three people from Pixar are standing outside and talking about how they made the big shot where they feature the Land of the Dead and how many animators it took and how many layers and so on and thank you for seeing our movie in the theater. The whole thing is a thinly-disguised attempt to dissuade pirates. A little less harsh than those dark blue/scary font short films.

Problem is, it’s not better. For one thing, this is going to do nothing to discourage piracy. If someone’s going to steal the movie, they’ve already done it. This is punishing the people who paid to see it. It’s like those “Click It or Ticket” or “Stop Senior Abuse” bumper stickers. Well, I was going to smack around an elderly woman today, but after seeing that bumper sticker I’m reconsidering it.

Second, you just ruined the best shot in the movie. I’d seen glimpses of it from the TV, but nothing that equals its grandeur, more like seeing a thumbnail. But then they put it on the big screen in their little vignette, and now its ruined. I don’t have any context to it, so I can’t appreciate it in its natural setting. Now I’m A) anticipating the shot B) instead of thinking how cool this looks I’m thinking about how they made it.

Come on, Pixar, you’re better than this. You KNOW how to make movies. I figure some bigwig production executive said “hey, you need to record some anti-piracy message. Make it personal so it doesn’t sound threatening. Or transparent. Or effective at all.” It’s like when they ruin reality TV with bumpers and commercials for shows. Example, a voiceover for “Dancing with the Stars” says “Whats-his-face has a shocking surprise that makes the judges heads turn.” And while the voiceover is going, they show him on an elephant or a unicycle. Totally ruins the suspense, the angle, and most of all, the need to tune in to find out. Idiots.