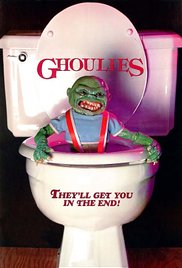 When I was little, there was a video store not too far from our house. I can’t remember what it was called. Mr. Movies? Video Update? I know it wasn’t a Blockbuster because the color scheme was red and white. Anyway, as those who grew up among VHS knows, the place was like an art museum. It wasn’t bad enough to have enough selection to give a nine-year-old option paralysis or sucker him into picking “My Pet Monster“. But they had to make every rectangle a beautiful magical portal to another world, each more enticing than the next. And no section had more intrigue than the Horror section.

I mean, that’s what they were meant to do — appeal to the visceral primal nature of fear and evil. Those pictures inflamed my senses with images of deformity, darkness, evil, bare shoulders, shiny knives, thick blood, bulging eyeballs, and rotting skulls. What was in that basket in “Basket Case”? Why did that face look so skewed? How did the Critters go from a needle-toothed fuzzy animal in the first movie to some amorphous multi-faced ball in the second? What was in that baby carriage? Why was that toy monkey so angry? Why was Santa carrying an axe down that chimney? What possessed someone to stab that shoe?

But for some reason the Ghoulies cover struck me hardest. As when you are a little kid, silly stuff scares you. Mostly stuff that involves the disappearance/disposal of things and not knowing where those things go. This may also explain my fear of escalators and bath drains.

And toilets belong to that category. I don’t remember being afraid of toilets. But they were definitely mysterious, for two reasons. One, it involves poop, which is bizarre in the first place (“I make this from my body, but it smells bad, and I want to leave it behind”) and 2) the toilet sucks it down and makes it disappear (“Where does it go?”). And then there’s the big question that any decent scientist proposes: if it brings stuff down, can anything come back up?

Enter Ghoulies. I wonder how much time I’ve wasted staring at this cover. I was a big fan of Gremlins — I don’t remember a time I hadn’t seen that movie — so this seemed like a page from the same book.

But these weren’t cute fuzzy mogwais with bizarre life rules. This was a slimy, skull-like baby-thing. And it was climbing out of the swirling portal of mystery, where things fall into the black hole of mystery and they don’t come back out. They’re not meant to come back out.