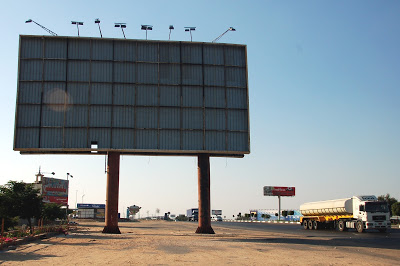 So where I live in the sub-sub-suburbs, there are often political billboards in the farm fields. (Mostly speaking out against abortion, like the “I had fingerprints at two months” kinda stuff.*) But there’s one right where I leave my neighborhood in the morning. They started about a year ago, maybe two. It’s always some political message in the form of a letter, and signed “Sincerely, Bill and Bob”. The message is always some trite phrase like “Dear Mr. President, LEAD, don’t follow” and “Dear Congress, Political correctness is NOT correct”**.

But this most recent one broke my camel’s back. And keep in mind I’ve got to stare at this every day of my life, every time I go to work. It says “Dear Mr. Kaepernick, What country provides more opportunities for all than the USA? Sincerely, Bill + Bob”.

First, “which country” would be the better word, because there are a limited number of defined countries to choose from.

Second, what does your question have to do with Colin Kaepernick’s actions? He’s protesting the treatment of black people by the U.S. government and its sub-entities. Specifically referring to the “Black Lives Matter” movement, which aims to eliminate violence and racial inequality against Black people, especially in the justice system. What do opportunities have to do with this? Are you from 1850? We’re kind of past the gold rush and Industrial Revolution at this point.

Third, only a straight white male would do this. Plus, if you can afford to post your message on multiple billboards, you have money. So check your privilege (I’ve always wanted to say that). That’s the privilege that thinks your opinion is so important you gotta plaster it in a small town’s face for three months. 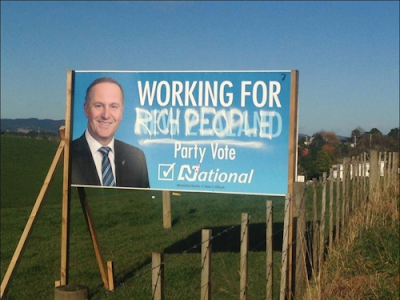 Fourth, I refer to you the Facebook post of this veteran that went viral shortly thereafter. Short version is that freedom of speech is why we fight. All other amendments are based on it. It doesn’t defend you against “icky speech“. It doesn’t defend you against the consequences of that speech. It doesn’t stop a private organization from censoring your speech, just the government. Nonetheless, America is one of the few countries that stipulates it as a fundamental rule. Even advanced countries don’t have that. England can pass a law to prevent certain books from being published, any work, any time.

Fifth and final, Bill and Bob are cowards.

But instead you paint it like so much graffiti, then dash off. And I gotta stare at your meaningless rhetoric five times a week while waiting for the light to change. This denial, this negativity, these messages about what’s wrong with America, what not to do instead of what TO do, just make me hate conservatives more. It gives me pleasure that their unpopularity means they have to use anonymous billboards with vague bombast. The left doesn’t have to resort to this. Their messages stand on their own. They’re rational, they’re moral, they’re accountable.

You know who has courage? Colin Kaepernick. In front his fifty-three teammates, coaches, 68,500 fans, and millions of people watching on TV, he was the only one to sit down when everyone else stood up. He knew it would create controversy. He knew it might result in losing his job. He knew it might lose him fans (either of the team or himself), lose endorsement deals, or reduction in status as a role model. But he still did it, because he believed so strongly. I think he’s maybe a little confused on federal vs. state abilities to deal with local police transgressions, but nonetheless, what he did took courage. He did it in public, under his own name, defended his actions, and accepted the consequences thereof.

So what are you going to do, Bill and Bob? 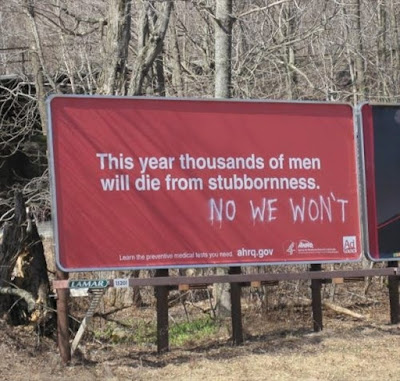 *No one mentions the gills and tail that a fetus develops. Strange they leave that out.

**I gotta talk about this one. Political correctness isn’t about what’s factual or true. It’s about respect. If they renamed the Redskins to the “Washington Honkies” or “Washington Gringos”, would you allow that?