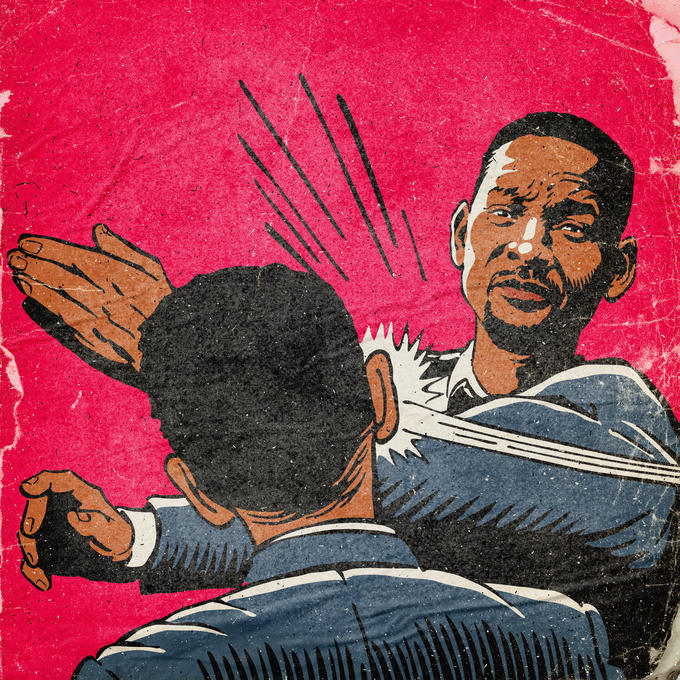 Let’s be clear. On Sunday night, two bad things happened. When I saw it, I knew A) it was all anyone was going to be talking about next morning (the memes must flow) and B) it was going to split the nation down the middle.

The question now is which was worse. The buzz seems to be that Will Smith was wrong and should have been escorted out. But I’m also seeing lots of women saying they liked his defense of his wife and thought he was justified. Here are the two big questions I had–Was Chris Rock’s joke worth it? Was Will Smith “White Knight“ing?

First, let’s look at Chris Rock. His exact words were “Jada, I love you. G.I. Jane 2, can’t wait to see it. All right?” At first Will Smith and Jada smile, then Jada’s face drops. Will Smith sees it. The slap occurs. Chris Rock takes it in stride, saying he just got slapped the shit out of (is that grammatically correct) by Will Smith. To defend himself, he says, in a pleading voice, “It was a G.I. Jane joke.”

Then why’d you tell it?

If you knew it was a poor joke, why’d was it on your list of shots to fire? G.I. Jane is a twenty-five-year-old movie that people only remember because Demi Moore shaved her head (because she was playing a Navy SEAL). At the time, Demi Moore was a well-known babe–equivalent to Zendaya today, if I had to guess. The movie was not good (I saw it.) It has 50% on Rotten Tomatoes and didn’t make back its budget. I’m betting there was much googling of “G.I. Jane” after the initial shock wore off. Certainly poor material to make a joke out of.

I don’t know if Chris Rock came up with that or a team of writers, but Rock’s the one who opened his mouth. He had veto power. He could have kept his mouth shut. People are demanding quality now, not quantity. That’s part of the reason we’re having the Great Resignation–it’s not that people don’t want to work, it’s that they don’t want to work crap jobs. Better opportunities are opening up. Same applies to entertainment.

We have reached a time when comedians are not underdogs getting arrested for free speech anymore. George Carlin, Richard Pryor, and Denis Leary are dead. More careful scrutiny is being given because there have been too many incidents of them “getting away with it” because it was “just a joke”. Too many Michael Richards, Roseanne Barr, Bill Burr, Bill Maher, Louis C.K., Dave Chapelle, and Bill Cosby.

Moreover, good comedy is not made from people’s appearances. Especially the parts you can’t control. “Four-eyes”, “lardass”, “cripple”, “pizza face”–these are schoolyard level jibes. They’re juvenile. And most times, it’s about something the targeted party can’t control. I can’t control being bald. My wife can control having freckles. You can’t tell what someone’s going through by looking at the surface. Jada could be fighting cancer in addition to alopecia and keeping it secret, you don’t know. Chris Rock certainly didn’t. It’s low-hanging fruit and it’s beneath Chris Rock’s standards.

Now onto Will Smith. Clearly this is a case of lost control. Some say that these people are in the public light — they must subject themselves to jokes at their expense. But did he do the wrong thing for the right reasons?

In “Woke Culture”, we call this “White Knighting“. It’s when a man thinks he’s defending a woman, but he’s really talking over her, when he should be standing to the side in support. I didn’t see Jada ask Will Smith to go up and serve Chris Rock some manners. So I think it’s safe to assume Smith did this without prompting. So he did wrong in that respect, pushing himself into something that was between Chris Rock and Jada.

But I also don’t think Jada would ask him to do that. In fact, I don’t see any world in which Jada goes to bat for herself against Rock. Because women have been trained to “accept it” and “take a joke”. Catcalls and sexual harassement–“oh, it was just a joke, honey, don’t get all bent out of shape.”

Which begs the question, should Will Smith have smacked Chris Rock? Will Smith kept making reference to “being a protector” in his acceptance speech for Best Oscar. Toxic masculinity can creep into that kind of mentality easily. If Chris Rock had hit back, how would the night have escalated? Thank God both of them had the wherewithal to understand they both went too far. But there also must be a line drawn somewhere. Like Chris Rock once said about O.J. Simpson, “I don’t agree with what he did. But I understand.”

So I’m on Will Smith’s side on this one. As a creative, we have to strive to be better.

The most interesting part is… Kanye West saved it. The guy who interrupted Taylor Swift’s acceptance speech, who makes ridiculous stunts when releasing albums, who can’t stop calling himself a genius. The guy with the ego the size of a planet brought forth the olive branch.

Like Chris Rock once said: “There’s a reason to hit everybody, just don’t do it.”