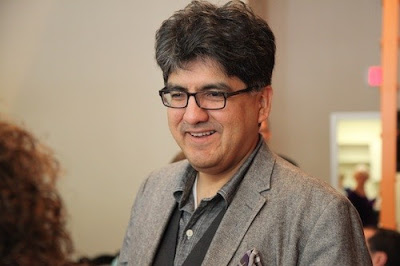 So Saturday night I went to see Sherman Alexie at the U of M, put on by its American Indian Association. When my wife was in college, she took an American Indian History class, and one of the required reading was Reservation Blues. I read it too and loved it, reading The Absolutely True Diary of a Part-Time Indian years later.

I didn’t have an idea of what he was going to talk about. And I don’t think he did either. I don’t think anyone did. When I sat down, there was about eight or ten people sitting in a circle on the stage, which made me think it was going to be some kind of round table discussion where I couldn’t see half the people. But what I couldn’t see was that they were surrounding a drum, not a table. It was actually a “welcome song” to start the evening. No complaints about that – it was pretty cool.

But then the lameness started. The student MCs I can forgive — they’re young, they’re inexperienced, they live in a niche world. But the “opening act” was… not good. It was like someone asked two professors “hey, we need to kill time before Sherman Alexie gets here, can you talk for twenty minutes?” “About what?” “(vanishes)”.

A obese social worker from Red Lake and a retired Indian professor told lame dad jokes with long pauses in-between. They sat at a podium and said things like “My Indian name is Running Deer, my son’s name is Walking Deer, my wife’s name is ‘Yes, Dear’.” It was the most awkward thing I’d ever seen. “What do you call an Indian bank? Tuckabuckadayaway.” I cannot believe these people did any kind of preparation beforehand.

Then more awkwardness by the student MC’s that felt like delaying. The whitest, blondest student president of the American Indian Student Society finally brought him out. It seemed like the entire night, no one knew what they were going to talk about. And that includes the main attraction. I suppose there was a connecting thread about the death of his mother, but even now, I couldn’t tell you a thing about her.

I think the first thing he said was how he looked different because he had just had brain surgery to remove a tumor, so he had lost his “geroni-fro”. And it continued like that. Imagine all the most vulgar, inappropriate parts of The Absolutely True Diary of a Part-Time Indian condensed and put into an adult version. About twenty minutes in, I wanted to leave. I was just so uncomfortable.  Especially when he started talking politics and insulted liberals. That’s when he totally lost me. That’s the sort of disrespect that keeps us divided as a nation.

At one point he called himself “Oedipus Rez” because he realized his mom was big-breasted and hot. So uncomfortable. Frequent mentions they lived with seventeen people in a one-room house with no running water or electricity. One time he slept in the doghouse because his mom threw him out after a temper tantrum. He doesn’t understand the concept of affection. His sisters were freaking out with laughter because they knew, with his mom on hospice drugs that made her happy, she’d be touching him. The first time he went to his white friend’s house, he thought someone had died because everyone sat down together. And that he should have brought his drum for a grief song.

You know how, when there’s a comedian of a non-white race, ALL their comedy is based on being that race. Not like being on point with race issues, like Dave Chapelle or Chris Rock or Key & Peele. I mean Carlos Mencia, George Lopez, Kevin Hart, Woody Allen — their entire shtick is repeating and playing off their own stereotypes. I’ve never seen an Asian comedian that didn’t center their act on being Asian. If they were another race, they’d be reamed. But somehow, if it’s themselves, that makes it okay. If the Washington Redskins were composed entirely of Native Americans, would that be okay?

For some reason all I can remember is the story of how he ate a bad Dorito and his mother’s viewing, and it made him poop so much he clogged the toilet in the funeral home (he explained he has a small bladder, but a big rectum) which he couldn’t just leave for someone in mourning to find. So he wrapped a paper towel around his hand — except for two fingers as pincers — and had to break it up and scoop it out.

Now I’ll be the first in line to admit I’m the whitest white privileged guy there is. So maybe I wasn’t his target audience (although if you’re less than 1% of the population at large, perhaps one should think about diversifying). I’m sorry I took the ticket for someone who would have enjoyed this more, who would have comprehended the hardships of living on the rez.

But I don’t understand how you can work so hard to defeat stereotypes and then turn around and embrace them for material. You’re pushing something away with one hand and bringing it in with the other. At no point did I see Alexie demonstrate any pride in his heritage. Maybe he doesn’t have any And that’s fine. What I saw was a guy trying to cope with his horrible life with humor. And that’s fine.  That’s what Deadpool does — humor is the only way to cope with serious, serious traumas. The kind that are too sad to cry about.

In a way, American Indian culture is reaching an extinction point, and he is a firsthand witness. In one story, he explained that their home was half sacred artifacts and the other half Native American kitsch from tourist attractions. They treat themselves as if they are all from the same tribe. I know not all Indians have powwows or drum circles.