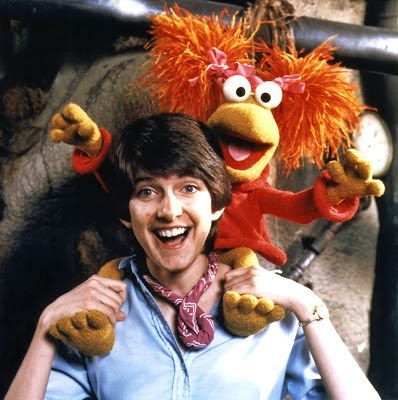 I was going to write an article about Red Fraggle: Early Feminist Icon. I got inspired after learning that the animator for Wheatley from Portal 2 is Red Fraggle’s puppeteer, which blew my mind. I grew up watching this person as a five-year-old as a muppeteer then 30 years later I’m playing a video game using this superbly designed character, and its the SAME PERSON. It’s like Kristin Prell’s been there all my life. It’s especially impressive when you learn how much she could do with just an eyeball.

You know how everyone thinks Rainbow Dash is best pony? Red Fraggle was there first. She was performing the stunts, showing off, crippled by self-doubt. She’s energetic, athletic, competitive (especially with Gobo), insecure, and boasty. Sound familiar? She doesn’t care what anyone thinks. She wants to have fun (like all fraggles). She doesn’t do flower-arranging, being in tune with nature, being motherly. We have Mokey for that. Her fun comes from not capitulating to the roles set by her gender.

Then I started thinking, “Wait, do fraggles even have gender?”  Fraggles have no sex. They don’t mate. They don’t have genitalia. They don’t engage in male-female romantic relationships. They don’t reproduce. Red has qualities that we recognize as a girl — she has pig tails, she has a high voice, she’s operated by a female, so it seems clear the production meant to portray her as such.

On further research, there’s actually very little knowledge about how fraggles are created. One episode implied they were hatched, but in another they don’t recognize an egg. In the “Weekly Reader” book “The Legend of the Doozer Who Didn’t“, a lazy doozer grows into a fraggle (what a tweest!), which means fraggles come from aberrant (perhaps genetically) doozers. However, this book is not canon. And it sounds more like a cautionary tale to scare young doozers. And now I’m wondering where doozers come from, because they DO have babies.

But I digress. Assuming that fraggles are sexless, does that make them genderless? According to our definition, no, because gender is the range of characteristics from masculine to feminine. Here, Hank Green can explain better.

This brings up more interesting questions than Red Fraggle being awesome. How does this apply to fraggles?  Can you have gender identity without starting with sex? There’s no binary spectrum to identify with — no male qualities or female qualities. Do fraggles recognize “boy” and “girl”? Because they use “she” and “he” pronouns. Do fraggles love? They have friendship love, but not romantic love. I guess the closest thing they have is “gender roles”, which somehow exist despite having no sex, romance, or offspring to care for.

The other thing to keep in mind is that fraggles aren’t real. They’re puppets, created for a kid’s show. Which means I have spent way too much time thinking about this already, and I should get back to work.

Also, side note. As a kid, I was scared to death of the poison cackler.