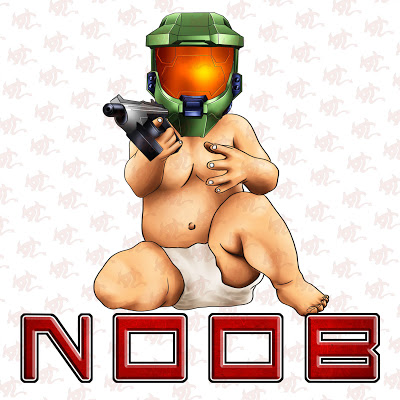 And that old man is me. I played Halo for a little while when my friend rented it and brought over his Xbox. We played co-op, and liked it, then never played it again for some reason. This was back when Halo was about the only game for the Xbox (like Super Mario 64 for the N64) and no one knew just how much it would blow up. I largely ignored it since I was a Nintendo/PSX man. Until now, when I bought it for $20 (too high in my opinion), grabbed a Mountain Dew margarita, and sat down to figure out what everyone was talking about.

The most satisfying thing about playing an old game is that you can pump all the settings to max. Anti-aliasing? 2x? 4x? Pshaw. Give it 16X. Textures? Load them all! Resolution? Mmm, that’s sounds good. I’ll have that. Of course, there’s only so much you can do to improve an old game. My question was where the graphics would fall on the Quake/Half-Life/Half-Life 2 spectrum? I couldn’t remember when Halo came out.

Well, I’d say it’s most comparable to Half-Life. You’ve got lego characters opening and closing their meatflaps like ventriloquist dummies. But I expected dated graphics. This was a launch title two-going-on-three console generations ago. But here’s all the things I didn’t expect.

I didn’t expect it to be essentially “Starship Troopers: The Game”. Which is fine — that kind of game is a long time coming. Yeah, there’ve been video games with space marines (Doom, Starcraft), video games with war combat (Medal of Honor, Battlefield) and video games with space themes (everything) and games that combine all three. I guess the thing about Halo is it finally offered everything people wanted with no bullshit. Aliens to shoot? Check. Things to shoot them with? Check. The end.

No exploding barrels. No invisible walls. No stealth sections. No quick time events. No long cutscenes. You don’t have to switch weapons to throw a grenade. You don’t have to scavenge for white boxes with red plus signs. And if you do die (usually because you were stupid), the checkpoints are very forgiving — they warp you back only a few clicks away. You get the sense that the people that created this game really tried. It’s like they say in software engineering. Get your program to do one thing and do it well.

Enemies have the reasonable AI — they retreat, use shields — but not so smart they’re impossible to kill. There are “assistant” AIs too, in your fellow space marines, who are somewhat idiotic. But at least there’s no dumb escort missions. If they die, it doesn’t really matter. They’re more like a nice bonus — some companions to provide backup. They never get in the way of you doing what you want. But at the same time, I still felt bad when one of them died, usually because I was charging with guns blazing. See above regarding forgiving checkpoints.

And it was easy to go in guns blazing because A) the awesome music makes you feel important and B) each weapon was so fun to use. Each sounded and looked like I expected them to (except the shotgun, which felt weak). And they were a nice blend, so you never used one too often. You had standard marine goodies — an assault rifle, a sniper rifle, a pistol (which ended up being my favorite thanks to its 2x scope), the sticky grenade, and the rocket launcher (don’t leave your FPS without it!) along with the curious alien weaponry.

And lastly, vehicles! Vehicles are one of the most problematic things in video games, especially in this era. They were either slow and clunky, death traps, glitchy, or worthless. But in a game like Halo, they rule. Of course, my favorite was the Warthog because it was simple to use and fast. And if you got it stuck, as I often did, you just need to flip it. No worries about it being forever stuck in rocks, or accidentally crushing a stupid marine. I just wish I didn’t always have to drive — I wanted to be up there manning the gun, taking out grunts. But that didn’t matter in the end when I got the Ghost, in which I felt like a WWI flying ace.

It’s a good thing I read the manual, because holy smoke, do they just throw you in with little exposition. Granted, some gamers might like that you just get to the shooting. But if you do, don’t put in junk that no one will understand, like “the Covenant” and “Reach” and “blind jumps”. I had no idea “Pillar of Autumn” was the name of the ship I was on, until I was off it. And what is a “Master Chief” anyway? What am I the master of? What am I chiefing? Who am I, anyway? For being such an iconic character, Ol’ Chiefy, he didn’t start out with much backstory. But then, neither did Mario or Gordon Freeman, I suppose.

The enemies have their good points and bad points. For about half the game there are only three types: little guy, medium guy, and big guy. The little guys are, well, this is where I end up scratching my head. The game feels like super-serial wartime aliens vs. marines hardcore Warhammer40k shit. But then you’ve got the grunts that sound like the Daffy Mogwai from “Gremlins 2: The New Batch”.

They even speak in English, whereas the other aliens speak in clicks and groans. And if that wasn’t bizarre enough, what they say in English are things like “Don’t shoot!” and “Bastard!” and “WE’RE ALL GONNA DIEEEEE!!!!1!”, while they scatter with their arms up in the air. Did I miss something? When did we start fighting the Looney Tunes?

The beginning of the third act is the weakest part for me. After you’ve lost Cortana for half the game, you see her again at the central console, where she and Wheatley Guilty Spark 313 get in words with each other. Problem is I can’t understand what’s going on because everything has weird names like “Silent Cartographer” (which is actually a room) and “Forerunners” (which are never seen). It doesn’t help I can’t hear what they’re saying either. Something about the sound leveling in this game was really off. As I was following Wheatley Guilty Spark to get the Index, he’d start giving some crucial exposition about the Flood. Then mid-sentence I’d get attacked by eight guys and lose what he said. (Plus, how dumb is Master Chief to just take the key and plug it into some mysterious space object without knowing what it’s going to do first?)

It’s weird that the storyline is so complex for a simple first-person shooter. Either A) these were things they wanted to include in the game but ran out of time or B) they tried to innovate by including a complex story, which was not the norm for an FPS. Around the time this came out, you were lucky to get a story at all.

I’m not so sure what’s so evolved about the combat either. There’s only a handful of weapons, and they all feel pretty samey. That’s why they’re so balanced — there’s no real difference. With the exception of the needler (which has homing bullets, but work on delay), it’s pretty much a 1:1 ratio of marine weapons to alien weapons. I said I never used one too often, but that wasn’t because I needed to, but because I was bored of my current configuration. Perfect Dark was released a year earlier on the N64, and it had like 20 weapons, including a laptop gun and Farsight sniper. Why can’t I get that big green cannon the big guys have? Or that one-hit-kill sword?

And last, I’m sure I’m blowing no one’s socks off when I say most of the buildings and rooms are indistinguishable, to the point where you can’t tell where you are. I felt like I was still in the old days of user maps that repeated the same tiles over and over. There’s generic purple spaceship hallways, generic gray installation hallways, and generic outdoor environment. Nothing looks like it serves a purpose, except to be a corridor in a video game.

A lot of times, I had no idea where I was going. That’s frustrating, and there’s nothing worse in a game than something both frustrating and boring. The doors weren’t clearly marked and all the rooms looked the same. There were no landmarks and no maps. I whooped in delight when one of Cortana’s nav points appeared in my HUD.

I like Halo. Would I play the single-player experience again? … maybe. Probably. I might look for some kind of mod to make the game more interesting. Or add some texture to the environments. But otherwise, I feel like I’m in Old Man’s War, and that’s not a bad thing. There’s a grizzled environment, the voice in my head, the colonization background, the funny-looking aliens, and the environment.

I’m looking forward to trying some multiplayer. I hear that’s where the game really shines, but I don’t think it’s fair to evaluate the game based on a component that’s dependent on other people. For one, I’m bad at deathmatch and everyone has a ten-year head start on me skill-wise. Plus half of the multiplayer experience is out of the developer’s hands.

I hope I’m not trying to hold a ten-year-old game up to today’s standards. Hey, maybe we can make this a series: Eric Plays Old Games He Should Have Played But Is Only Now Getting Around to Them. Hmm, title’s a little long. I’ll work on that.