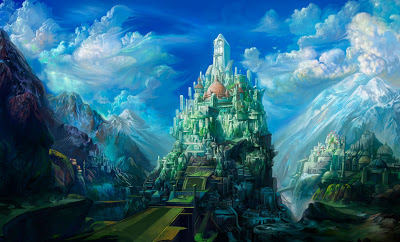 Last night I was tossing and turning because I was worried about my new novel. It’s a first draft, it should be written badly, but that doesn’t stop me: it’s boring, the characters are flat, there’s not enough action, I’m wasting my time on scenes that don’t advance the plot. Stuff like that. And the biggest problem that I’m glossing over is that, while I’ve done a lot of world-building, I haven’t done a lot of terminology obscuring.

What that means is changing those certain words that pull you out of the fantasy setting. For example, I had one character say “the heavens”, referring to up there. Well, this is an alternate world. There’s no bible, there’s no Jesus, there’s no angels, there’s no Judeo-Christian God. So there’s no such concept as heaven. It’s that kind of subtle thing that makes fantasy writing so hard.

Another character refers to the “cafeteria”, because this is a school. Well, no one ever used that term in Lord of the Rings or Dungeons and Dragons. But what the hell am I supposed to call it? It’s not a dining hall — it’s too small for that, and Harry Potter used that term already. It’s not a pub, not a “chamber of food”. And Thesaurus.com is no help. I went with Eatery, but that might change. And I’m not going to make up a word and have them eat at the shminga-shmingy. That’s lazy writing.

I ran into this problem a few times when I wrote the initial short story, but I was barely trying there. I was using words like “pizza” and “boo-boo”. But why couldn’t pizza exist? It’s cheese, bread, and tomato sauce. Do I have to call it something stupid like tomato bread? Or flaffalaffa? Plus, I feel like I’m distancing too much if I obscure everything in a huge ‘Name of the Wind’ style formed culture. This book is really supposed to be “Looking for Alaska” meets “Harry Potter”.

There should be a list of terms that don’t fit in fantasy novels. Someone should come up with that, like a custom dictionary. Mary Robinette Kowal made up with a custom dictionary for her regency novels. She compiled all of Jane Austen’s writings and made a word list. Any words in her novel that didn’t show up, she changed. There were some wibbly-wobbly terms: ‘rinky-dink’ is in the word list, but doesn’t fly today. But a common word like ‘blink’ was not a match.

This would make an excellent crowd-sourcing project. If you guys can think of any words that commonly pull you out of fantasy, let me know, and I’ll add them here. I’ll even make a macro for it.

Or point me in the right direction of an already established dictionary (I can’t believe I’m the only one to come up with this idea).