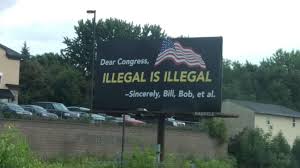 I thought I was done with them. I thought maybe they’d died or run out of money. But nope, they’ve put up a new billboard.

Granted I was sick of the Lord Fletcher’s one that had been there for years. All it had was an image of a walleye dinner with “Wally Wally” as a caption. Didn’t make a lot of sense to me, and all it did was make me hungry. But when I saw it, I was usually on my way home to dinner anyway. And after two or so years of looking at it, it started to become unappetizing.

Two years is about the same amount of time that stupid “Illegal is Illegal” billboard has been on the back of it. Maybe three. I’ve had to look at that damn hypocritical, cowardly letter to “congress” for, like, three years of my life. I thought “oh, maybe someday they’ll replace it with a puppy, or advertisement to join the National Guard, or at least SOMETHING new.”

But no, they replaced the backside with, instead of legitimate advertising, another Bill and Bob note. Should have known they weren’t going away. This one says

First of all, there’s nothing respectful about hiding your identity.

Second, fake news? You’re calling out fake news? At first I was hopeful that maybe Bill and Bob were neutral. Maybe their “illegal is illegal” message meant illegal doings of the president and that congress should prosecute them, because an illegal act is an illegal act. I actually didn’t think it was about immigrants until someone e-mailed me about it. About six months after inauguration.

By the way, telling fake news to “do their job” is a little ambiguous. If there were such a thing as Fake News, their job would be to print “fake news”, not real news. You’re telling them to do the job that you hate.

Thirdly, this is just as ambiguous as “illegal is illegal”. To me, congress doing their job would be to file articles of impeachment, since there is plenty of evidence that the president is not not guilty. Double negatives cancel each other out, you know. And when you’ve got ambiguity on a billboard, the amount of meaninglessness is proportional to its size.

So thanks a lot Billy and Bobby. Here I was hoping you had faded into obscurity, but I guess you managed to scrounge up $300 more to waste on an idiotic, poorly worded advertisement. At least it makes for nice motivation, because it sits outside the window of my gym.