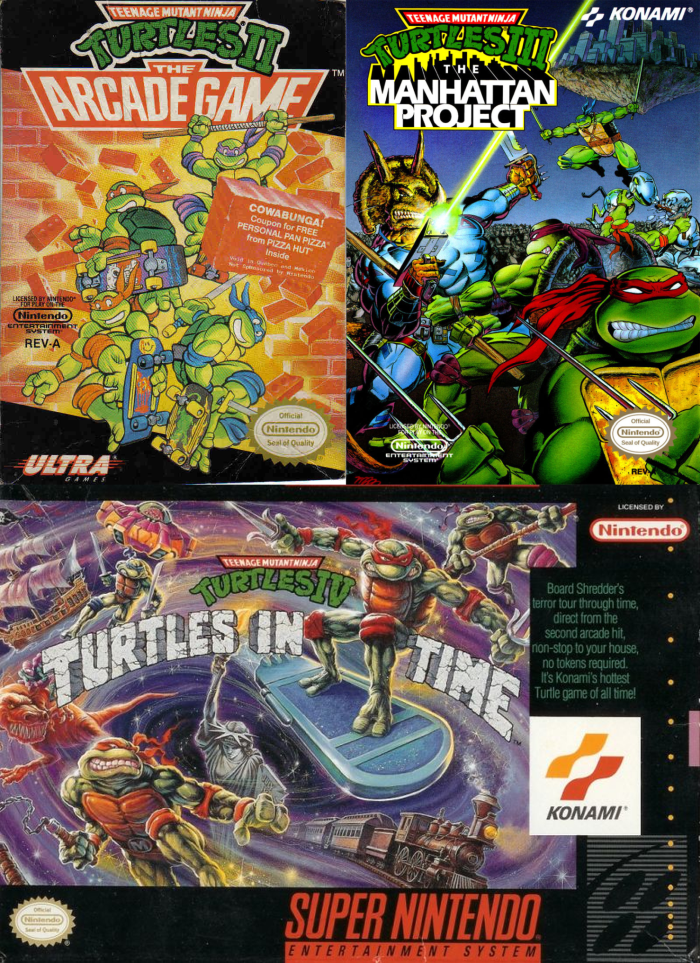 What can be said about the Ninja Turtles? Who here didn’t don a mask, grab a stick and suddenly become a mutated reptile with a name ending in “O”. The best part was that the games were excellent beat-em-ups. There was always a crowd around the Ninja Turtles Arcade Game at Circus, Circus, either watching or participating.

I had the first game on the PC, but it was awful. The gameplay was too complicated and it was buggy as hell. Often the only way I could get to the third level was by the fortunate chance of a level skipping error. I still maintain that this game was not meant to be a ninja turtles game. There’s too many weird things that have nothing to do with the turtles, like the wall crawler composed entirely of feet. Or the mini-technodrome? What the hell is that? What cartoon is that from?

But TMNT2 was a far cry from that. I remember I got it on my birthday, along with a bunch of other paraphernalia. The game was difficult. Without the Konami Code, I could only get about as far as the fourth level before I ran out of continues. Thank god for that code, though. Otherwise, I never would have beat the game. But that ending is awesome. Three bosses in a row, the last being multiple Shredders. You have to beat them both until one loses its helmet. That one is probably the fake, because the real one takes longer to kill. So then you can focus on the real one, except the fake usually gets in the way, dies, and then the process repeats. Of course, you could also end up decapitating the real one, then hammer on the fake one, and waste your time. Very innovative. The only disappointing thing was that the graphics didn’t match up with the arcade. It was like you were controlling carnival dolls.

TMNT3 just continued the idea and enhanced it. It introduced special moves for each turtle (Raph’s was the most satisfying), more vivid environments, and my favorite, the over-the-shoulder-throw. It also added all the new characters like Tokka & Rahzar and a final boss fight with a very pissed-off Super Shredder. I think this game was easier, but that didn’t make it any less fun. One of the unique things I remember was that the Konami code gave you a cheat screen, instead of just shoving lives at you. The two best parts were level warping and adding lives. It also introduced the idea of beating up on another turtle, an idea that would translate to a mini-game in TMNT4 and then its own game in TMNT: Tournament Fighters.

Of course, TMNT4 was a revolution. It’s about as close to the arcade game as you can get, and then some. It added new bosses, new levels, and overall improvements. I remember playing this all the time with my little cousin. It was about the only thing he wanted to do when he came over, but I was happy, because I had very few people to multiplayer with. No one in my family cared about video games at this point, so it was the single-player mode for me on most things I played. I’m sure he also liked it because it was simple to play. That doesn’t mean it wasn’t fun though. The only thing better than bashing skulls is bashing them with a friend.

The storylines? Well, there’s not much in a beat-em-up, but that doesn’t diminish these games’ ability to ingratiate the player inside. I most remember the vivid settings in TMNT 3 – the ocean surfing, the broken Manhattan bridge, and the final battle in the sky. Thankfully, this game also moved away from the repetitive Technodrome and straight-line from point A to point B. TMNT 4 was like playing the cartoon. And there wouldn’t be any entry here without TMNT 2. Like Mega Man, these were games I frequently played when I wanted to escape, not because I was being someone else, but because I could tell I was going on an adventure, with varied landscapes.