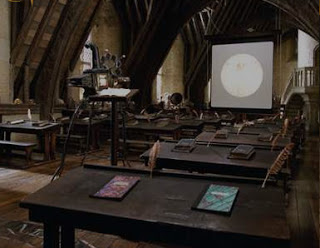 PROFESSOR HORATIO G. LEECHJIGGER: Good morning, class. I’m your new Defense Against the Dark Arts professor. Now, my expectations for you this semester are…

Harry Potter walks up, casually, from his seat, and goes toward the end of the room. No one knows why–the students look at each other, confused. He stands in front of the professor, who is equally confused.

PROFESSOR HORATIO G. LEECHJIGGER: Uh, yes, may I help you?

HARRY POTTER: All right, out with it.

PROFESSOR HORATIO G. LEECHJIGGER: What do you mean?

PROFESSOR HORATIO G. LEECHJIGGER: I beg your pardon? (with that quirky, British pompousness) I assure you, Mr. Potter, there’s nothing wrong with me. Dumbledore himself hired me-

HARRY POTTER: Don’t fuck with me, old man. You think I’m stupid? My teacher freshman year had Voldemort on the back of his head. You know Voldemort, right? The dark harbinger of evil who killed half of everyone everywhere?

PROFESSOR HORATIO G. LEECHJIGGER: I assure you, young man, I-

HARRY POTTER: Then it was a loudmouth celebrity who took the position to sell copies of his book. He’s now in the insane asylum. Third year, it was a werewolf. Fourth year, a death eater spy.

HARRY POTTER: Fifth year was Dolores Umbridge. She made us write sentences with our own blood and tried to use the Cruciatus Curse on me. She got eaten by some centaurs, after she decided it was a good idea to hurl some racial slurs at them. And finally, sixth year, Professor Snape took the job. You might remember him. He’s the guy who killed Dumbledore.

PROFESSOR HORATIO G. LEECHJIGGER: Yes, that was a terrible tragedy. You know-

HARRY POTTER: No, you know. You know that you’ve got some secret you’re not telling us. And it’s not going to come up until there’s a giant snake at my throat. So go ahead. Tell it before I have to get nasty. Are you a pile of bugs under that robe? Mutant goblin? Double agent for Lord Voldemort? O.J. Simpson?

Harry starts taking off his clothes.

PROFESSOR HORATIO G. LEECHJIGGER: Mis- Mister Potter! Please. Stop that at once. This is highly irregular.

HARRY POTTER: Shut it, git. Give it up. You got a bomb under there? Illegal papers? I bet you’re Canadian, aren’t you?

Professor Horatio G. Leechjigger is now naked in front of the class. The students start giggling.

Red-faced Harry Potter returns to his seat. But he’s not as red-faced as the professor.

PROFESSOR HORATIO G. LEECHJIGGER: It was a reducio spell that went wrong, okay?

RON WEASLEY: (whispers to Harry) I’d put an invisibility cloak on that.

HARRY POTTER: Not exactly an Ollivander wand, is it?

Sure, it’s about eight years late, but it’s still funny.