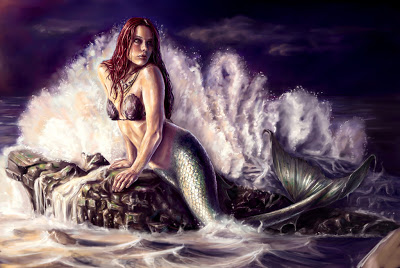 Okay, there’s this.  Sony Pictures is going to do a dark-retelling of “The Little Mermaid”.  Here’s some choice bits of info.

It is based on the book “Mermaid: A Twist on the Classic Tale” a book that is based on the fairy tale, but basically expands on the human princess (essentially the Vanessa character, if you’ve only seen the Disney movie) who is fighting to unite her warring kingdom.

It will be directed by Shana Feste, who directed “Country Strong” (a movie I didn’t see but looked like a serious version of Lurleen Lumpkin).

First, reading the Amazon summary, it seems like it’s just another two girls fighting over one guy romance with gothic undertones.  The princess lives in a convent, the other has built-in characteristics of pain and sacrifice.  There’s lots of pining, heartache, and misery.

Second, it’s not a dark re-telling.  It’s just a re-telling.  The original fairy tale is the dark one.  True, there’s no violence like Cinderella (cutting off parts of the feet) or rape Sleeping Beauty (the prince does his business while she’s under the spell, impregnanting her with twins) or eye-gouging like Rapunzel (not to mention the illegitimate pregnancy before).  But it does have a heaping helping of mental abuse.

The mermaid makes all these sacrfices (her voice, her family, her legs which make it feel like she’s walking on knives all the time), and the prince treats her like a pet.  He dresses her in page-boy clothes to go riding with him.  She sleeps outside his door on a pillow.  (I think there are concubine-ish undertones here, but that’s conjecture.)

The only thing that keeps her going is the thread of hope that he will fall in love with her, but she has no voice, no personality, and no identity.  So he treats her like “a little child”.  She has a chance to rescind her sacrifices by killing the prince and his bride, but she makes the noble decision and chooses suicide (after her sisters sacrificed their hair — where a mermaid’s magic is — to buy her way back).

But instead of dying she turns into a “daughter of the air”, some kind of demi-god that can gain an immortal soul after three hundred years of good deeds.  But every time they see a naughty child, they cry and each tear is a day is added to their probation.  Which is essentially blackmailing youth into good behavior.  If they’ve been watching my kids, they better pull out a book, probably something by Tolstoy or Huho, cause they’re going to be waiting a while.  And I’ve got good kids.

Dark enough for you?