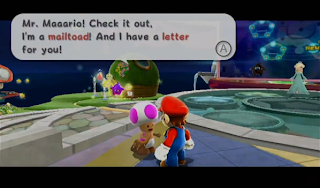 I’ve been playing Super Mario Galaxy lately, and usually when you load your game, there is a mailtoad waiting there with a letter from Peach. The letter says something like “It’s tough collecting all the stars. I hope this will help you on your journey.” And she’s enclosed 5 1-Ups.

This is what I’d be saying if I was Mario.

MAILTOAD: Hey, Mario. I have a letter from you from Peach! Do you want to read it?

MARIO: You got a letter for me? From Peach?

MAILTOAD: Yep, sure do. You want to open it?

MARIO: Wait, wait, wait. Peach–the girl who Bowser kidnapped in his castle/spaceship which is surrounded with lava and cannons, and is light-years away–sent a letter here, to the immovable spaceship I’m sitting on in the middle of unidentifiable space.

MARIO: And this is a regular letter, right? This isn’t like e-mail or anything–not that I’ve seen anyone in the Mushroom Kingdom use a computer. This is a paper letter that came through the mail.

MARIO: … How did you get this?

MAILTOAD: How did I get it? Well, the Starshroom that the toad brigade built can fly a bit. There’s a comet with a mailbox on it, and since I was the Chief Mailtoad in the castle, I thought it was my job…

MARIO: (sardonically) Yeah. That makes sense. So how come I have to literally jump from planet to planet, fighting all sorts of monsters, defying gravity, and falling through multiple black holes, while somehow the woman that’s imprisoned in a totally unreachable galaxy can get out messages to you. Who picked up this letter? Bowser’s got her locked up in a cell, yet somehow she has access to a mailbox?

MARIO: And not just letters, but she can send out 1-Ups with those letters. 1-Ups, the little green mushrooms that basically make me immortal. The thing Bowser should probably be doing his utmost to prevent me from getting. Somehow, she is able to regularly get me not one or two or three or four but FIVE of these things and send them to me whenever she likes.

MARIO: And it’s up to me to literally fly through the galaxy and save her ass?

MARIO: Screw it. She can save herself. Get Luigi to do it. (Mario waves his hand dismissively and walks off)

MAILTOAD: But, what about Peach and you? Your romance?

MAILTOAD: (Confused, he looks around, unsure of what to do. Mario is talking to Rosalina, taking off his cap and kicking the ground, pretending to be coy. Mailtoad sees Luigi milling around the garage) Mr. Luigi!

MAILTOAD: Check it out, I have a letter for you. From Princess Peach.

MAILTOAD: Uh-huh, and she included five… no, twenty 1-Up mushrooms for you!

LUIGI: (holds the letter to his chest) She cares! Finally! It’s Luigi-time!

MAILTOAD: Yeah, great. Now get cracking, those stars aren’t going to save themselves.

MARIO: Somehow, she is able to regularly get me not one or two or three or four but FIVE of these things whenever she likes. And it’s up to me to literally fly through the galaxy and save her ass?

MAILTOAD: (falls to his knees, breaks down crying) All right! It’s me. I’m the one sending you the letters. I’m the one with the 1-Ups. They’re all over here–in the boxes, behind the kitchen, on that ring that spins around.

MAILTOAD: Because I love you! Because I love what you do. You save the princess. It’s what you do. But now she’s dead! She suffocated in the vacuum of space. Bowser’s light-speed drive imploded because a Goomba fell into the engine. She’s nothing more than a smoldering black hole now. We all saw it, but we couldn’t tell you. You were chasing around those bunnies.

MARIO: So she’s gone? No more Bowser? No more Peach? My princess?

MARIO: My love isn’t gone. (extends his hand to Mailtoad)

MAILTOAD: (sniffling, he looks up) What?