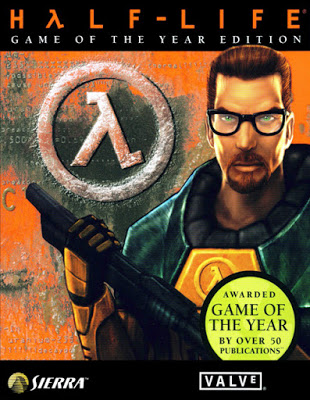 Hopefully, you’ve all read my manifesto on Half-Life 2’s Storyline (and lack thereof). It’s like a premise with no plot. There were a lot of questions left in prequel, and even more provoked by the sequel that were never answered. It lacked the compulsion to care about what you were doing, and with the exception of Alyx (who doesn’t shine until the subsequent episodes). You don’t care why you do anything or about anyone, even yourself.

I first got the game for Christmas. My mom told me the guy in Best Buy recommended it, because for the first year, I didn’t ask for any video games (I think I had them all). I was busy with college, and finding much joy that my new computer could run an SNES emulator. I can’t remember if Half-Life was even on my list at that point, but it had already been named Game of the Year, and other prestigious awards so… can’t blame her. I think it was Xmas 2000, so Half-Life was well popular by then.

The problem was said dinky computer I got at Computer Renaissance could not run it – no 3D card, not enough memory, minimal network support. So I had to wait until I got my next computer.

As it turned out, I bought one the next year, but I didn’t play it right away. I still wasn’t confident my computer would run it, and, again, college. But one day I was searching for something to do while in my dorm, and I installed it to see if it would work. It did, and it was quite fun. I distinctly remember playing it in the dark, and for the first time, getting motion sickness from a video game. The most memorable part for me was the opening tram ride. I love that it starts at the beginning of the day, you see all the sights of Black Mesa, get a feel for what they do, what sort of place it is, and your (insignificant) role in it all.

But mostly, it was long.

In fact, all the cutscenes were unskippable. Because they all take place in game. So while Dr. Scientist is talking to you about Lambda complex, you’re jumping around the room, looking for weapons, bouncing off the walls, or staring at a mouth opening and closing. But you’re never taken out of the action. You never stop being Gordon Freeman. So it’s both ingenious and boring.

Not to mention that, because there’s no meta-game elements (tutorials, hints, experience points, fickle fingers of fate), it can be difficult to know what the game wants you to do. There aren’t enough hints, or you miss the hints. Or maybe I’m just stupid. I do have the habit of running into a room with guns firing repeatedly, even though I keep dying (hey, it’s a sound strategy, and eventually it’ll work). For example, when you run into the tentacles in the blast pit, you may not be aware that they’re sensitive to sound. So you end up saving 1800 times trying to get through without being smushed. No one lets you know to throw grenades to distract it. My plan A FPS strategy doesn’t really work in this scenario. It’s too much freedom and just enough freedom at the same time.

Half-Life is a great game, but it’s really a game you can only play once. The first time you’re in awe and wonder about the spacious factory, the little touches (like scientists being snapped up by barnacles, or being sucked through a vent), and the big events like the satellite launch and Xen. The magic of Half-Life came from those little slices of realism that instill fear, despair, isolation, and anger. Valve did a really good job of putting you in the driver’s seat and letting you BE Gordon Freeman. The best part of Half-Life is making my own witty responses to all the scientists or yipping away at the Gargantua coming after me.

But the second time, you know everything that’s coming. Sure, you can try to hunt for Easter eggs, or see the things you missed, but if you just want to play a game where you satisfyingly shoot things with a shotgun, this isn’t it.

But the important thing is it started Valve’s string of success, which went on to influence the way many games are made. Specifically, fully integrated cutscenes, games like Mass Effect where you are the player, and realism. I still like this game, but it turns out you can’t go home again.