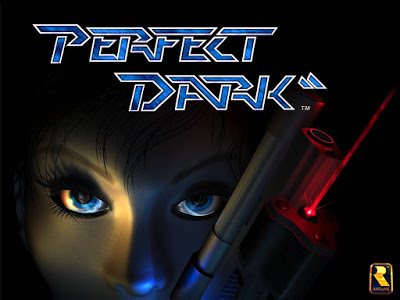 It depends on the age you were when you owned the N64, or how many friends you had. Ocarina of Time is the game everyone can agree on, but that doesn’t mean it was the most played or most liked. Older gentlemen preferred Goldeneye, while young’uns liked Mario 64. And you can tell the tastes shifting during this era as more people migrate to the PSX, which had more mature games. Perfect Dark was Nintendo’s attempt to try and win back this audience.

Side-Rant: I am really sick of Nintendo’s wishy-washy-ness when it comes to audience. They never seem to know what slice of the pie they want. They make a Wii intended to capture a “casual gamers” market, which doesn’t really exist. None of the best games have been casual, they’ve been the properties they’ve milked for twenty years. Then they let out bloodfests like Manhunt 2, Madworld, and No More Heroes (which won Gamespot’s Wii Game of the Year). They barely support third-party developers, and they can’t have ny ports becasue of the low system specs and control scheme. Except for Wii Sports, I haven’t heard of any game not described with the words “tacked-on wii controls”. Why did Nintendo make a system for 4-year-olds and grannies, and avoid marketing to a core, already established audience?

Stack to our bory. Perfect Dark was better than GoldenEye, IMHO. It had better gameplay, better weapons, better multiplayer support, better game options, and better environments. The fact that GoldenEye got it right first was its saving grace. But Perfect Dark did it better. There was no dull missions with mediocre environments. Everything had a fun sci-fi feel, with space ships and villas and cyberpunk buildings. The characters are more than blocky dolls (I said more than, I didn’t say they weren’t).

And weapons! Oh boy, GoldenEye doesn’t hold a candle to these guns. You got auto-targeting uzis, guns that read a magazine cartridge like a scanner, guns disguised as laptops, guns that absorb little orbs for ammo, guns with exploding bullets, guns that shoot through walls with X-ray sniper sights, guns that turn into proximity mines, guns that fire thousands of razor blades per second, first-person view rockets, and sharks with frickin’ laser beams on their heads. The only disappointment is the shotgun, which feels more like a firecracker popper. But my personal favorite was the tranquilizer gun. You could have a whole game where the goal was to fuck up your opponent to the point that all he sees is a red blur. And he eventually dies in a glorious drug-induced haze.

Only the people up on the video game world knew about Perfect Dark, and only they were able to enjoy it. Fortunately, my friend and I were of their ilk, and I don’t think anyone appreciated the multiplayer aspect as much as us. With Deathmatch alone, each time we found a new way to play – new configuration of weapons or location that brought the game to life. I only regret we didn’t play enough co-op. But the deathmatch was so customizable, you barely needed it. It gave us something we lonelyhearts sorely needed – bots.

GoldenEye succeeded because of its multiplayer, but if you’re playing the game solo, you get nothing out of it. Bots made everything better, and they were so diverse – easy bots, hard bots, bots that were heavily shielded, bots that went for certain items, bots that tried to kill the strongest person, bots that sought vengeance, bots that camped, bots that ran like little bitches. You could transform the game into almost any big movie scenario (for example, combat boosts + the lobby = the Matrix).

The only thing the game was lacking was a little more blood, instead of paintball-like splotches on the uniform. But the game was already rated M – and it’s not like we’re playing Mortal Kombat with guns (hey, that gives me an idea).

This game should have been the next icon, like GoldenEye was. If GoldenEye was its own license, it could have become a Devil May Cry franchise. But Bond games have become some weird stealth/FPS game that I don’t even know how you play it. It’s a shame they haven’t done more with Perfect Dark (the Perfect Dark Zero Xbox 360 launch game does not count, it did not capitalize on the name nearly enough). There’s much potential in the Dark that has yet to be seen. Nintendo – pick it back up and do something on the Wii with it. It’s not slayer science.