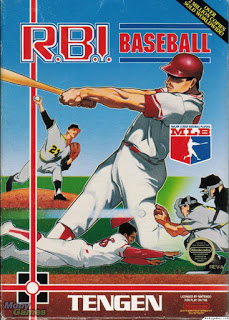 Clearly, if you look at the dates above, you should be wondering if I’m a time traveler or extremely behind the times.

I included these two again because of memories of playing with my dad. He’s a computer guy too, so he’s not dumb to the ways of video games. But for some reason, he just couldn’t pay attention enough to beat me. The best part was when I’d get a base hit. The screen stays pauses in-between when you pick up the ball and you switch to the batter’s POV in case you feel like taking extra bases. Problem was, my dad never paid attention to the little inset in the corner. So I’d be merrily advancing while he was in the outfield holding the ball up and wondering why it wasn’t switching back.

RBI Baseball was one of the first baseball games for the NES. It was made by Tengen so instead of the gray square cartridge, you got a black cartridge with a gold label and a sleek design. Of course the sleek design made it a bit difficult to pop in and out, but whatcha gonna do.

The character design was cute too. Instead of humans, you got these chubby bobble-head looking guys. They could swing a bat, but watching them totter to the outfield was like playing with weebls. According to the screen, games were attended by dense groups of flashing light bulbs, which makes sense because of the fireworks that accompanied home runs.

The other reason I usually won RBI Baseball with my dad was because I always chose the AL All-Stars who had Saberhagen as their starting pitcher. He was one of the few pitchers that threw a wicked curveball, and again, this would always fool my dad.

Ken Griffey Jr. was a different purchase for myself. I rarely bought sports games, but the Nintendo Power review gave it very favorable marks (including a cover story). The best part of this game was that you could customize the player’s names. This, for some reason, was an extremely important aspect of any game for me. If I could customize the names of the people I was, I could make a team full of my favorite people like Johnny Five or the Ghost Busters or the Ninja Turtles. And then I could make a team of villains and have them play each other. Of course, good always won. Wayne Gretzky Hockey for the PC was like this too. Each player had strengths and weaknesses and a TON of customizable names. So many, I ran out of people.

What does this mean for story? Well, not much. It’s more that these games were fun to play. Although, being able to personalize something means personalizing the experience. You can be the person that you’re playing, and suddenly the game’s story becomes your story.