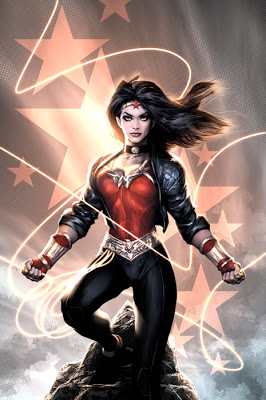 These days I’ve been thinking about Wonder Woman. One of my daughter’s friends had a Wonder Woman cake for her birthday (four years old) so I know her fanbase isn’t dead. She represents something important to women. Someone who can hold their own with the other super-people. Someone strong enough to stand with the G.I. Joes and He-Men. Independent, strong-willed, powerful.

Barry Lyga recently wrote an article regarding why we won’t see a Wonder Woman movie. He argued that Wonder Woman’s portrayal is too inconsistent for a proper story. I agree, but I take it to the next level — even the consistencies prevent creators from updating her in some medium. Not a movie, not a TV series, not a cartoon show, not a video game, comic book, or even a crappy, actor-injuring musical. And they’ve tried. Oh, how they’ve tried. (shudder)

Don’t get me wrong, this news does not please me. I would love to see a Wonder Woman adaptation. I would love to see more any movies with female superheroines who aren’t relegated to “token girl”. I’ve already talked about how Supergirl is a great character. Wonder Woman is not that far removed. Some of the same principles apply — god-given powers, secret identity, struggle for selfdom in a different world. But unlike Supergirl, Wonder Woman’s fundamental concepts — her “spirit” (see bullet point 4) — are intrinsic to a bygone era.

Like Superman (and we all know how I hate Superman), the only reason she’s persisted is because she was the first female superhero. And to make Wonder Woman translate to today’s audiences, you would have to alter her so radically that she wouldn’t resemble Wonder Woman anymore. Someone’s going to leave unhappy — either the fanboys or the casuals.

I don’t want to say it’s impossible to make a Wonder Woman adaptation. There’s no concept so impossible that it can’t be executed well. Just look at the Teenage Mutant Ninja Turtles or Batman. They’ve had dozens of incarnations from gritty mature to comically camp to nostalgic overload to bizarrely commercial. Not all of them were good, but the best stayed true to the spirit of the material. Superman is about might for right. Batman is about fighting for justice within a corrupt world. Wonder Woman is about… uh, well.

Oh, let’s just talk about the elephant in the room. The one that’s all trussed up.

Except that Wonder Woman is frequently shown either tying up criminals or being tied up. The golden lasso is a clear tool to that end — restraining criminals, forcing them to submit to her will and tell the truth. At one time, it even forced people to obey commands. You might say superheroes often got tied up and restrained in those days.

Not like this. Whether it’s body control or mind control, Wonder Woman got popular through exploiting sexual fetishes. Moulton never denied the comparisons. “Give [men] an alluring woman stronger than themselves to submit to, and they’ll be proud to become her willing slaves!” (“Why 100,000,000 Americans Read Comics.” The American Scholar 13.1, 1943-44, page 43) How are you supposed to write a story in 2012 around that?

How would you even start the story? This is one superhero movie I wouldn’t mind seeing the origin story for (I say that because it seems like every superhero movie is an origin story, and the genre is starting to suffer from it). The problem is there’s a stigma around Amazons.

And if you follow that to it’s logical conclusion, then you end up with an unlikeable character — an entitled, bitchy woman with more masculinity than femininity who can’t form social relationships. It’s a cliche and it’s no one I want to spend time with. If they took a page from “3rd Rock from the Sun” or “Bones” to make her transition to normal society a little comical, that would be something. But then you’re changing the character.

The first thing you’d have to do is totally revamp the costume. You can’t have this all hanging out there. For one thing, her entire lower body is unprotected. For another, her entire upper body is unprotected. This is not a costume that invokes power, it invokes a male sex fantasy. Just like Power Girl and the new Starfire. I would hate for my kids to see that and think it’s what strong women wear. But if you change the costume, you change the character.

The biggest problem with Wonder Woman is that her weapons and tools just don’t make sense. Forget about the bondage for a second, let’s talk about the lasso. Now, there’s nothing inherently wrong with such a weapon — it’s reminiscent of Indiana Jones’s whip (or Catwoman’s whip, if you want to go there). But you need an edge if you’re going to rub shoulders with Superman’s laser eyes, Green Lantern’s ring, or Aquaman’s… aqua. So it gets the power to force anyone to tell the truth. Aaaaaaaaand you’ve effectively written yourself into a corner.

First, it’s not a very exciting power. Second, it becomes a deus ex machina. This guy knows where the bombs are, but he won’t tell us. Here you go, use this lasso. Robin’s in a slowly-filling water tank? Lasso. This guy knows where Buffalo Bill is hiding the bodies. Lasso. How short would “The Dark Knight” have been if Wonder Woman was in that interrogation cell instead?

Next, golden bracelets that can stop bullets. First, those things are, like, three by three inches. They only things they could block are tiny cocktail swords (unless you’re one of those anime samurai that can deflect bullets with your sword). Second, your wrist bones would shatter as soon as a bullet hit. Wonder Woman does not have super strength, just agility and martial arts training. Finally, four words: aim for the legs. The well-exposed legs.

Finally, we have the invisible airplane, probably one of the most WTF vehicles in superhero history. Why does it need to be invisible? How does that help you fight crime? The military can already make vehicles undetectable by radar. It’s not even really invisible, you can still see her in the sky, sitting on air, which is just visually bizarre. And it has nothing to do with the Wonder Woman character — what is so Amazonian about an airplane?

Even if it wasn’t invisible, airplanes are just cumbersome. You gotta have enough room to take off, land, and then store them when you’re not doing the first two. The only superhero planes I remember are the X-Jet (from X-Men) and the Batwing (which I haven’t seen since 1989). All the rest of them either fly naturally or stay close to home. Airplanes are a throwback to an era when you weren’t crammed in like sardines, porno-scanned, and spending eight hours on the tarmac. It’s an old concept that just wouldn’t fly today (YOU LAUGH NOW).

How about companions? Now I’m speaking as someone who’s never read the comics, but familiar with the character, i.e. the target audience. The only companions I know of are Steve Trevor and Etta Candy. Steve Trevor and Wonder Woman had the screwed-up relationship of “I Dream of Jeannie”. Wonder Woman’s got all this power and ability, yet she feels incomplete without him. She’s not happy unless he acknowledges her mousy alter-ego, making her almost sorry for her abilities. Meanwhile, he’s either disciplining her for being so brash or not paying attention. She should have just slipped him a “Do you like me? Circle yes or no” note. Not someone I’d want my girls to look up to.

Etta Candy? Who is she supposed to be? Comic relief? Is she like the Theodore of this triumvirate? Always looking for something to eat? She’s just a novelty character. Did anyone check if she has an eating disorder?

And the biggest problem with the supporting characters is that Wonder Woman has no memorable villains. That is a must. That is the thing that makes Batman, X-Men, and Spider-Man continue to thrive and draw in audiences. (Superman has good villains too, and I wish movie-makers would realize that. There’s more than Lex Luthor out there.) A hero is only as good as its villain. And I’m afraid any villain of Wonder Woman would devolve into a designated girl fight.

So we’ve got weapons that don’t work, an origin story with questionable origins, and supporting characters that we don’t like. We might have to relegate ourselves to Wonder Woman as the Smurfette of the Justice League. I hate to admit it, but I don’t see how to make Wonder Woman a headliner without unmaking her.

Pants to be darkened!