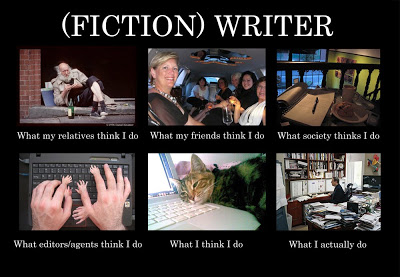 I recently discovered the “What People Think I Do” meme and found this little gem. It got me thinking about why I’m so shy to tell people that I’m a writer. The first reason is that I’ve only been published in a few magazines and anthologies (like “Live and Let Undead”, now at fine bookstores everywhere). But I feel that until I get a novel on the bookshelf, I’ve earned no legitimacy.

I feel that when most people, myself included, learn that a person is a writer, the first thing they ask is if they’ve been published. The perception of being published versus not is the difference between this 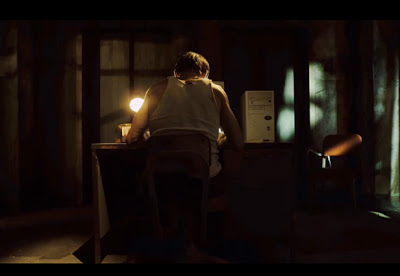 You just need to look at a sampling of query letters received by agents to see why (QueryShark and SlushPile Hell have a fine selection of sample #queryfails). You’ve got people thinking they were deigned by God, therapy fodder, blatant plagiarists, and dozens of dull, unoriginal stories. And that’s just the people who can string together basic sentences. Which only represent 40% of people who say “I’m a writer.”

Fact is, unless you’re someone like Tobais Buckell, Suzanne Collins, Jim C. Hines, J.K. Rowling, John Scalzi, Seanan McGuire, Neil Gaiman, Sherwood Smith, Patrick Rothfuss, so on, so on, i.e., someone who identifies him or herself as a writer, you are just a sad person in the basement, with the glow of the monitor as your only light source, writing centaur erotica. Or god forbid, fan fiction. Imagine that, someone composing fan fiction calling themselves a writer.

And I don’t want angry comments, because I am that guy in the basement right now. The problem with telling people you write is that it opens a lot of question you may not want to answer. I foolishly put “Write science fiction and fantasy novels” on my resume under other interests. Of course, this was a bad idea, because it only intrigues the interviewer to ask questions.

Embarrassing questions like “What do you write?”, to which you hem and haw until you finally gasp “Different… kinds of… stuff…” and foolishly admitting that your last novel, after finding the best way to put it in laymen’s terms, was about “The Little Mermaid” crossed with “Waterworld”.

Judgemental questions like “Are you published?” Well, you can hang your head shamefully at that one while you reply in the negative. And then wonder whether this guy knows anything about how the writing world works, that the best authors can get 500 rejections, that most people don’t sell their first novel, or even their second.

Personal questions like “Can I read your writing?” that either won’t work because what you’re writing isn’t finished yet and, unless you’re presenting it for critique (which you are not because A) you don’t trust this person B) this person doesn’t have the literary merit to give you the information you need to improve your work), you never present an unfinished product for show OR what you’re writing is inappropriate for friends (see aforementioned centaur erotica).

Can of worms questions like “Have you ever thought about self-publishing?” and that while the idea sounds good on paper, where people like Amanda Hocking and Christopher Paolini make headlines as the exception not the rule, self-publishing is in its infancy and that while the world sorts through the sea of the aforementioned plagiarists and writers “on a mission from God” (spoken in a Dan Aykroyd Chicago accent) it’s not a viable option for a novice with neither the time or money to push the marketing that it would need. Of course, you can’t say this to the person you’re asking for a job.

It shouldn’t be embarrassing, but for an introvert like me, it invites the possibility of personal questions and new angles for judgement that I just don’t need.