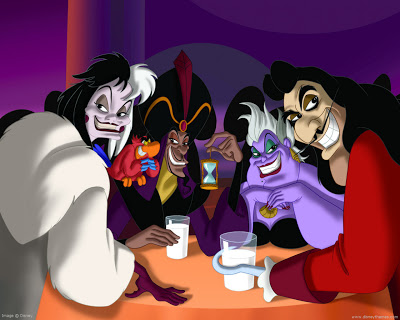 Hooray! It’s the new year. How about a new series? Since I’m done with Featured Fan Fiction, I gotta have something else to write about.

You know what I love? The concept of good versus evil. What makes someone evil? What’s the definition of evil? If someone steals food to feed their family, is that evil? Are the heroes so good even though they’re constantly trying to kill the bad guy?

Remember this gem that circulated the net about a year back. A famous television listing by Rick Polito for The Wizard of Oz: “Transported to a surreal landscape, a young girl kills the first person she meets and then teams up with three strangers to kill again.” Or Scalzi’s offering for Star Wars: “Disaffected farm boy destroys military installation, killing thousands.” (Find more gems here) The empire is just another government and these rebel separtists are trying to constantly usurp their objective of galaxial unification. Every good guy is someone else’s bad guy.

A hero is only as good as its villain. Everyone remembers Darth Vader, nobody remembers Luke Skywalker. Hannibal Lecter had four movies of awesomeness all about him. And he’s the bad guy! Mr. Potter, Norman Bates, Hal 9000. Sometimes you don’t even need to see the villain, like the xenomorph from Alien, the shark in Jaws, and Man in Bambi.

Disney’s famous for characters — heroes, villains, and secondaries alike. The heroes and heroines have been analyzed quite a bit, especially princesses — is Ariel a lovesick ditz or headstrong adventurer? Why are the princes such lifeless duds? Is Mushu racist? Where is Pocahontas’s nose?

And villains are fascinating to begin with, because they all represent our dark sides, which we all have if we get too much power. Think about it — if anyone got the powers of Superman, they would go just like in Megamind. So what do you get when you combine nostalgic Disney movies with a love for the theme of “good vs. evil”? You get “Analyzing the Disney Villains”.

I’ll be judging each Disney villain from their trove of animated movies, and evaluating what makes them good, what makes them bad, and giving a final rating. What sort of criteria do you use for that? I couldn’t find much online so I made up my own.

Motivation – What does he or she want? This includes the stakes for losing that thing he/she wants, and the root cause of that motivation.

Character Strengths – No bad guy is completely lacking of good qualities. At least they shouldn’t be. Two-Face is a good lawyer. Verbal Kint was a good storyteller. Moby Dick is good at… being a whale. This category will also include anything they might enjoy that doesn’t contribute to their greed or malice, but their character.

Evilness – On the opposite end, how bad are they? What do they do that defines them as evil? Do they eat kittens? Run a Ponzi Scheme? Double dip the chip?

Complement to the hero – A good villain should be the other side of the hero’s coin. That just makes the hero’s journey that much harder. Draco Malfoy is everything Harry Potter could have been, if he’d sided differently. Batman and The Joker. Robin Hood and the Sheriff of Nottingham. But sometimes you get villains that float out there, like Lex Luthor or any James Bond villain.

Fatal Flaw – Heroes don’t win because they were faster with a sword or dumb luck. They win because evil brings about its own end. Like Julius Caesar’s hubris or Jack Torrance’s blind alcoholic rages. A good fatal flaw is the key to a villain’s downfall.

Method of Defeat/Death – This one will be more or less objective. I’ll be rating on the cinematic-ness of the villain’s death. Some will be harder than others: Jaws’s head blows up by gas tank, Jaws bites a power cord and gets electrocuted, Jaws’s head blows up again by grenade, Jaws gets stabbed by a ship’s prow. All look pretty good on screen, but Jaws was cinematic to begin with. Meanwhile Count Dracula usually gets killed by sunlight, where he either crumbles to ash, kind of explodes, or disappears in a puff of smoke. Sometimes he’s staked or stabbed which often leads to a milder climax. And sometimes he’s just sort of… killed ambiguously.

Final Rating – And finally, I give a X out of five star rating. Consider it the seal of approval for either using a daguerrotype of this villain in a story, or a villain that could use some improving on.

Final note: I WON’T be doing EVERY animated Disney movie, for a few reasons. One is that some of them simply don’t have villains: Fantasia, The Many Adventures of Winnie-the-Pooh, and Dinosaur (which was just a shill for CGI and a rip-off of The Land Before Time). Likewise, I won’t be doing any of the cartoon compilation movies like Fun and Fancy Free or Saludos Amigos (with one exception). And I won’t be doing any of the movies I haven’t seen and refuse to see. These are the bombs that were made after the Disney Renaissance in the 90’s. Those include Treasure Planet, Brother Bear, Home on the Range, Chicken Little, Meet the Robinsons, and Bolt. Maybe you love them, maybe you think the list is complete without them. If that’s the case, write your own analysis.

So now as the magical negro Jiminy Cricket says, on with the show!