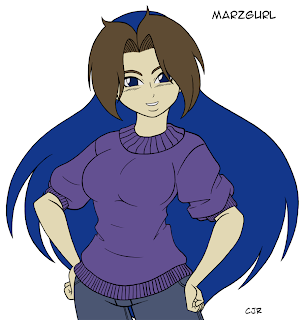 MarzGurl is one of the Channel Awesome (A.K.A. Doug Walker’s That Guy With the Glasses) vloggers. She specializes in anime and the works of Don Bluth, which are a lot more comprehensive than I thought.  Plust she looked smoking hot as Princess Mononoke in Suburban Knights.  Channel Awesome’s more known for their videos, but right now MarzGurl is doing something I think is fairly important.

She’s examining Twilight, the book, as she reads it. She was curious what all the fuss was about, as any good geek should do, and is posting a literary analysis as she goes on.

I’m really impressed with the level of detail. She’s looking at exactly what is wrong chapter by chapter, specializing in Stephanie Meyer the writer and Bella the character. And it’s not just good because Twilight deserves to be bashed (and if you don’t believe me, click the link).  It’s good for writers. It shows the level of detail you need to go into when making a novel, unless you want to reveal yourself as an incompetent fraud.

For example, in the first few pages, it’s immediately clear that Meyer has no idea what time her story is taking place. Bella starts in Phoenix, AZ and going to upper Washington state. Even though it’s not relevant to the plot (what plot?), MarzGurl does a great job illustrating that, by the context clues, there’s no way to determine what time of year it is.  The temperatures and precipitation cited are inconsistent with the real world. It’s clear that the author herself doesn’t know, and doesn’t care.  And that’s bad writing.

Not to mention the great descriptions of how apathetic, ungrateful, shallow, whining, and manipulative Bella is. Before we even learn about Edward, she has three other boys pursuing her, and she doesn’t give a rip.  Yet she claims to be unattractive and plain.

Not to mention Meyer’s writing style. I’ve never read her books, but I can see right away, by the passages MarzGurl points out, how inconsistent and nonsensical her prose is. People don’t sound like they’re talking to each other. They don’t sound like real people, let alone teenagers (she did get one part right – that they’re self-centered). Plus her characterization hops from one mood to the other, with no motivations. There’s a lot of “and then” connectors, but “but” and “therefore” like there should be.  She can’t decide if Bella wants to be noticed or unnoticed.  She can’t decide if Edward wants to be around Bella or not.  She can’t even decide what time it is.

So check it out. Twilight fan or not. You’ll be glad you did. 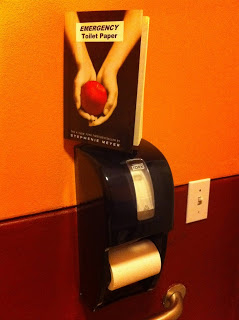