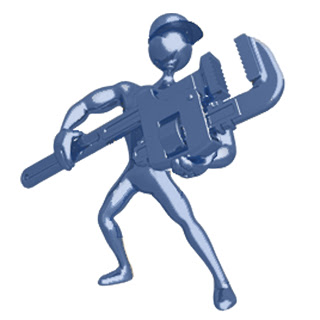 One of my heroes is Adam Carolla. He’s a working man with good horse sense from working with conservative blue-collar types and liberal Hollywood types. One of his favorite issues is the “pussification” of males today. That men don’t know how to change a tire, can’t move a couch, and that they seem to take pride in this (e.g., “I couldn’t change my oil to save my life!”) They are constantly hiring out basic DIY jobs to others that because they don’t know how to do hard work. And this is diminishing the work-ethic of America.

I used to believe this, until I tried to put in a kitchen sink. Then I realized it’s not simply a matter of unwillingness. It’s about applied knowledge.

Well, of course, the first thing we did when we bought the new sink (and faucet) was make sure it measured right, and we checked the current set-up to make sure there were no parts on one side that didn’t match on the other. We saw two hoses going from the faucet down to the shut-off valves glued onto copper pipes. Seemed like a simple enough procedure: shut off the water (via the shut-off valves under the sink), disconnect the tubes, pry up the sink and place in the new one, connect the new faucet to the tubes. All done.

The first problem was that the faucet hoses would not plug in. Why? I don’t know. The instructions indicated they would connect directly to the shut-off valves. And from there were two junky, plastic tubes (again, glued on, not screwed on as expected) resulting in a female-to-female connection that wouldn’t work. Enter trip #1 to the hardware store.

Since we had no idea what we were looking at, I stayed at home and waited while my wife went, taking a digital picture of the set-up with, in case we were missing something simple. No, not really. She called back saying the shut-off valves weren’t supposed to be glued like that, thanks to the cheap, save-a-buck-anywhere construction that new homes get these days. So she said to pop off the shut-off valves.

I worked on that for ten minutes. I really tried too, I thought I should be able to pry them off with my new going-to-the-gym strength. But I ended up cutting up my hands. I called her back saying it was impossible. She borrowed a pipe-cutter from the hardware store (now we’re just going to destroy shit) and bought two new shut-off valves. Unplanned purchase #1.

So we took off the old plastic junk and put on the two new valves (making sure to shut off the house water first. We’re stupid, not dumb.) Unfortunately, the shut-off valves keep leaking. Half an hour of running up and down the stairs, shutting the house water off and on, yelling up to announce my actions. No matter what we try, how much we tighten it using lion-like strength, it’s not working. Now we cannot turn the water on in our house, because we have no way to shut-off the copper pipes. (My three-year-old tells me “Dad, we’re out of water!”)

Luckily, a plumber in the area came over to fix this. He installs newer shut-off valves — the third generation — so we can turn on the water again. (My wife and I are secretly hoping he can install the whole sink, but he says he doesn’t have time to do that). For his ten minutes of work, we paid $$$125. Basically we paid him for his knowledge and tools, not for any hard labor or difficult task. We could get that knowledge and tools… with classes and many purchases for things that would have a one-time use. And we haven’t even made forward progress yet.

After some prying of the old sink, double-checking that the sink fits, and clean up of icky water/bacteria residue, we are now ready to start assembling the sink/faucet before implantation. But there’s a problem. The rounded base just sliiiiiiightly overlaps the left sink well (because it’s not symmetrical) when we put it in the center hole.

Now we could drill a hole into the sink–it’s designed for that–but, again, we do not have a drill bit sufficient to drill into granite composite. We are not thrilled with this concept, because we’re fielding worse than a drunk Bill Buckner (it’s October, I’m allowed one Bill Buckner reference). Plus it’s a nice new sink we don’t want to ruin. Enter trip #2 to Menards.

We take the kids with us this time, since it’s a thirty minute journey one way. They’re starved for attention and are almost due for naps, and dad’s been yelling at them this entire time because he’s hot, hungry, frustrated, and needs to poop but is too angry and determined to get this shit done to poop. But of course, this goes as well as one expects, with the wandering, the wanting of treats, the running around, the hiding behind boxes. We quickly choose a faucet that fits a one-hole sink, but it’s $$$40 more.

Once home, we put the kids down for naps–at least that’s one distraction eliminated–and eat a little nosh. Now we are moving ahead. The faucet fits nicely into the sink. The sink fits nicely in the counter, although it takes three tries. One of us has to be below it, holding it up, while the other does the impossible job of perfectly aligning it onto the Plumber’s Putty, which neither of us have ever worked with before, and don’t know how thick to make it. It looks like we’ve laid the sink on baking bread.

We make the putty thinner and lay it on again, while we fasten the “sink clamps”. I don’t know what they are–the old sink didn’t have them, I don’t know how they attach to either the sink or the wall, I studied the picture for ten minutes and still don’t understand how these things are supposed to work. Fortunately, my wife does, bless her heart, and fastens them all. But not before we break one during the alignment process, which means we have to pull the damn thing out again and get putty everywhere. 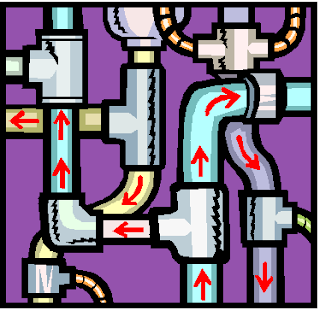 It’s now mid-afternoon. We started at eight o’clock in the morning. But things are going smoother. The pipes and tubes connect without spraying water everywhere. It feels like I’m working on an engine, since I’m on my back, amongst the sewer-y aura of the open PVC pipes. And my back is soaked with water absorbed by the towel we laid down. In the process of reconnecting things, we discover that the new sink is too short for the PVC pipes we had, just by an inch. Wife makes trip #3 to the hardware store to get a new one. Unplanned purchase #4.

Finally, my wife caulks the sink while I try and get the kids ready to go out to dinner. Caulk gets everywhere. The area by the backsplash, where the water mostly splashes, doesn’t get sealed well because the faucet is there. Plus it’s too narrow to get the caulk gun through. Lots of paper towels were used that day. After that, not much to tell. The water ran, and the pipes didn’t leak, so now we got a new sink.

But look at what we had to go through. I’m not even thinking about what we spent on the sink and faucet. I’m still thinking that we spent about $200 before we even started. How cheaper was it to put in ourselves? How many days did I take off my life from the stress? How irreparably did I damage my relationship with my family?

I’m not ranting about this because I’m venting or making fun of my own masculine incompetence. This is to prove a point. There is a reason that men aren’t doing these jobs anymore. It’s too difficult. This is not shit you can do in a day or save money on by DIY. There’s no way that, by looking at the garbage disposal, that it just twists off. That’s a four-layer ring/disc contraption that I’ve never seen before, nor know how it works. I would have been trying to unscrew everything, probably damaging it in the process and never knowing how to put it back together.

Work is becoming more and more specialized these days. I’m sure the same principle would apply if anyone tried to do some programming. They’d take one look at the gobbledygook of code and their eyes would bug out. But I know exactly what it’s trying to do. The problem is, I spent so much time learning that language I had no inclination to learn plumbing or home repair or anything working with my hands.

I guess this is why we never see Mario do any real plumbing. 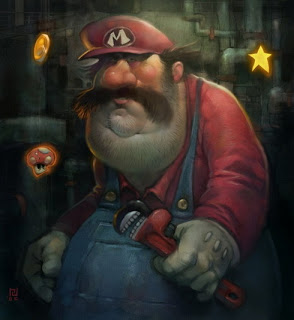