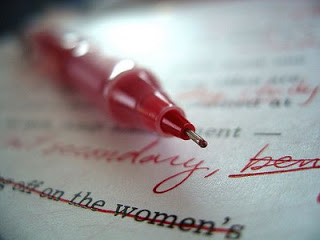 I am in the middle of a new experience — making line-edits to a story so it’s suitable for publication. I thought this was something only done for books, but apparently short stories need it too… if they’re going into a book. Which makes sense.

95% of these changes are grammar-related. 40% of that 95% are easy — avoid an acronym here, take out a bad word choice there. The others require a lot of thought: weak sentence openers, avoiding past perfect tense, sentence opener variety. And as I make the changes I find myself questioning myself: does this make the story better? Is this what I meant to say? How do I change the sentence so that A) it avoids the error and B) still maintains what I meant to say?

For example, the main character runs a zombie contingent in the army. I refer to them as “the zombies”, as in “the zombies marched forward”. This is in place of “the men”, as I would have referred to them if I was writing about normal soldiers. The line-edits want to change this to just “zombies”. (“Drop the ‘the’, it’s cleaner.” – The Social Network) If I just refer to them as “zombies march forward” the take on the role of the mass-consuming normal zombies instead of the zombies with army discipline I want to portray them as. In my opinion.

I want to integrate as many of the edits as I can. Every writer says when they follow the advice of other (more experienced) writers, it works out for them. But I worry about whether whether I’m making the edits the right way — whether I’m improving the story or screwing it up more. For example, there are a few instances where there’s a line with passive voice or past perfect. And I look at the line and think “I don’t even need that line”, and remove it. Maybe the editor thought it was a good line, just needed to be in the right format.

Some of the tips contradict what I was taught in school (numbers 10 and under should be written out in narrative, all acronyms should be written out in dialogue) or are no-brainers (avoid passive voice, format first person character thoughts in italics) and some are just things I know are a problem in my style, but just hard to get rid of (avoid past perfect, questions are asked not said).

If I can commit these tips to memory, I hope my writing can improve to the point where it’s even more publishable.