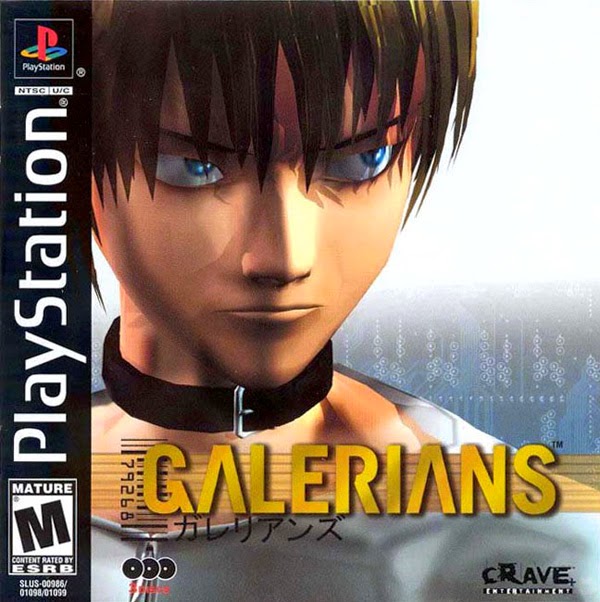 As you can tell from some of my other selections in the Video Game Memories series, I became a fan of the survival horror genre, just like everybody else. One of these, again introduced to me by my friend through one of our copious Blockbuster rentals, was a game called Galerians.

In Galerians, you play as a boy with no memory named Rion. You wake up in the hospital and discover you’re telekinetic, pyrokinetic, and most importantly, psychometric. This is the most interesting aspect of the gameplay, both me and my friend thought, because if you encounter a locked door (which are in abundance in survival horror), you can “sense” the door to find out where the key is (although honestly, the pictures are too blurry or close-up to give a great deal of help). In addition, you can “short out”. This means that, over time, an “AP” meter fills. When it’s full, your HP drains, your speed slows, but anyone around you automatically goes Scanners. This is the cost of using your psychic powers. Besides that, it’s pretty standard key-finding, file-reading, tank-turning fare.

But the key aspect to me was the environment – it’s all cyberpunky and dark, like Sam Spade meets Akira. The world is a bleak night-drenched city, controlled by a super-computer. Do the citizens even know who’s at the top of Mushroom Tower? Does anyone else in the world exist? Your enemies range from borderline psychotics, to robots, to guys that look like Darkman. You have to escape from the hospital you woke up in, then go to your former home, where you see how your parents were killed through flashbacks and “sensing”, and discover your purpose in life.

Then it’s onto the Babylon Hotel (which is the piece de resistence of world-building), where you continually explore an hotel that combines elements of the 1920’s elegance with futuristic decay. There’s a bloodstain leading to the hotel clerk’s office, and each room has a well-defined character – from a rooftop sniper, to a bipolar ballerina, to a man building an atomic bomb, and rounding off with creepy preacher who has a “grey” on a cross over his bed and searches you for a “donation”. And if you play through the level thoroughly, you see how each of them meet an end by your stalkers.

Even though critics regarded this as a C-list game, I thought the storyline was spot-on. Yes, the voice-acting is pretty terrible (especially Rita), the puzzling isn’t especially high-caliber, and the game could fit on one disc, instead of three, if it wasn’t for all the FMVs. The characters are dry mannequins with blase voices. But it was the flavor that drew me in, and it really spoke to me as a teen.

The whole plot is about overuse of pharmaceuticals. Instead of getting meat or herbs, you regain your health, your power, and your sanity by capsules and injections. This game came out around the “pill-popping days” of the early 2000s, when half of all news headlines included the words “medicating” and “kids”. Doctors were telling youth that their problems in life just needed some drugs. Zoloft, Prozac, Ritalin, and all their choice counterparts were being given out without a real understanding of the underlying problems. It was curing the symptoms, but not the disease.

I think it was a powerful metaphor for the angsty teen (read: me) at the time. You’re dependent on drugs to live, you never know where you’re going, everyone is out to get you, your own body backfires on you, and you get so angry and frustrated that you’re ready to explode and take out everyone around you. I might be sounding pretentious by saying it was a metaphor for the times, but if you look at it in the right light, there are some powerful messages in this game.