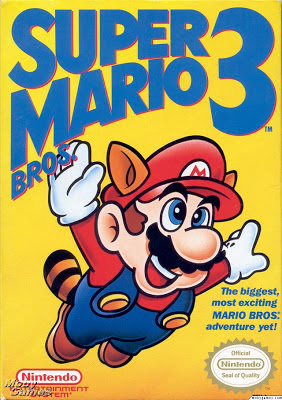 Let’s do one of these, since it’s been a while.

I don’t think I need to tell anyone my age about the phenomenon surrounding Super Mario Bros. 3. It was featured in a movie, even, which was a big thing back then, when there weren’t enough consoles so that you’d see someone using a N64 controller with a PS2 game (I’m looking at you, 40-Year-Old Virgin). This game was huge. Huge, I tell you. It started the map feature that many games of this era adopted. You could find secret exits, hidden entrances, and plenty of bonus content.

I asked for this game for Christmas. To show my lack of video game knowledge, the two games on my list were this and “Where’s Waldo?” Fortunately, my dad had more savvy than to get this game, however, it wasn’t in stock at the time. So I got a Pringles can with an I.O.U. for Mario 3. While I love Pringles, this was better, and I’m glad my dad made the right decision. I didn’t have to wait too long, I think it was still January when we got it.

Of course, for this game, I got the strategy guide. Without it, I wouldn’t have understood what I was doing. But some other friend had it and the game, and with the two combined, I realized I would need it if I was ever going to play it. This didn’t make it any easier, believe me. This isn’t like Final Fantasy where you’ve got all the treasure chests and boss weaknesses laid out in front of you. You still had to have timing, composure, inventory strategy, and cunning to win. The best thing the guide gave me was the key to the Match Card game, which you could use to fill your inventory with good stuff.

Ironically, this was the first Mario game I finished (for some reason I did it in the wrong order – after this, I beat Super Mario 2 and Super Mario 1, so I did it in the wrong order). I remember specifically how it happened. I was playing it over at a friend’s house, and using warp whistles, we were able to penetrate the last screen of Bower’s Dark World. Now at the playing level we were at, we needed a Starman to make it past the first part – those rotodiscs were too much for us. I remember I ran out of Starmen at some point, but made it to Bowser (and when that guy dropped down, I remember uttering a girlish shriek). Too late, I realized how to defeat him, but I had no Starmen left. However, my friend did, and he nobly bequeathed his controller to me, because I had the better skill. I eventually did it, my heart beating a thousand times a minute. I remember being very careful with getting over the created pit to the door, and I remember yelling at the screen when Princess Toadstool jokes “Our princess is in another castle”.

This game was great though – so much to do, so many worlds to visit, and so many powers. I like Raccoon Mario the best cause he looked like a kitty. But also was the fact that for the first time, Mario could fly. For some reason this stuck with me, and probably a lot of other people. But there was also the Frog Suit, Tanooki Suit, Kuribo’s Shoe (which they have to bring back at some point), item carrying, Koopa kids. The list goes on, and without this game, video games would be very different today, even if there aren’t so many platformers. I think everyone’s forgotten what a fantastic game this was.