I fell in love with this book immediately, which has never happened to me before. I am not an early adopter, and it’s the onus of every book to entice me. Of course, by the time I know that, I’m usually victim to time sink fallacy. But look at this cover. It looks like all the books in the old Disney movies. You know, like in Cinderella and Sleeping Beauty where a live-action book opens at the beginning and closes at “the end”. Now I have a book like that. I can look like I’m reading an old timey volume of forgotten lore (quoth the raven). Look at me — I’m gushing and I haven’t even opened the book yet.

Inside is more than fifty stories of women who kicked ass and took names, folk tales you never heard of, tribal leaders, revolutionaries, women who outrode Paul Revere, outsmarted popes, outbattled kings, and outwitted empires. Each entry is about a page or two, so no princess outstays her welcome. They’re like wikipedia entries, but don’t duplicate the dry descriptions. Many include anecdotes and details that bring them to life as real people who existed. This is not a research/reference book. It’s entertaining and informative like The Daily Show or CGPGrey or Extra Credits. The author adds a unique flavor/voice that gives away how much he loves this subject and how much he wants to share it.

Plus, each entry has a beautiful illustration of the lady therein, rendered as a kind of Dreamworks/Disney princess. Like each woman has her own movie poster. It even includes notes on how the art includes culture and tidbits not in the story.

Now this volume does have a fault: there are maturity ratings and content warnings for each story, ranging from one to five. But even the tamest wasn’t appropriate for kids under ten (IMHO). In fact, just about all of them… well, this makes me sound like the most conservative of parents, but they acknowledge the existence of sex, use words like “plastered”, and assume some historical knowledge. It’s not that the content is vulgar or adult. It just brings up questions that I don’t need to answers yet. Which makes it kind of strange that this book wants to highlight famous influential women, but the content is too old for when girls are their most influenced. Maybe they can release a PG version for the younglings? I want them to learn about these people too. The earlier the better.

I dunno. It’s a basic quest story. The Peculiars need to get from Point A to Point B and they come up against obstacles in-between. The bulk of those obstacles take place in WWII London during the firebombings. It’s hard to get invested in the characters again because they never stay in one place for long. There are no “quiet moments” where they talk about what they’re feeling or their reactions or how they feel about each other. The kids bicker among themselves about where to go and what to do, but never about their relationships. They don’t use their powers much, except for invisible kid, so I have trouble telling any of them apart.

It’s more like exploring the “expanded universe” of peculiars. And this time around, the events are even more aimless. Like the author pulled out a photograph at random and had to write about it. As a result, this seems like random stuff that happened. Because by the end, it seems like it was all forced filler. No one has a plot arc and no one feels changed at the end. The bulk of what they learned is that World War II sucks (which I already knew).

The View from the Cheap Seats: Selected Nonfiction by Neil Gaiman

These are all the speeches, articles, blog entries, and forewords Neil Gaiman has written over the years. A lot of them were about stuff I know nothing about — old authors that he admired, music I don’t listen to, stories from his youth I’m too young to appreciate. It’s not a memoir, it’s a series of essays. Most of them are gushes about someone. There’s nothing about the writing process or creation in here, except the “Make Good Art” speech which everyone knows.

And it’s long. His writing style is unchanged — full of comfort and warmth, like when Luke Skywalker meets Obi-Wan Kenobi for the first time, and you know that this guy is one of the good ones. But I am not the kind of guy who has found solace in any of Gaiman’s influencers — Diana Wynne Jones, Terry Pratchett, Will Eisner, etc. There are a few memorable ones, but as a whole, this is only for the most diehard Gaiman fan.

It’s… all right. It’s perfectly average. There are no groundbreaking ideas, no new techniques. It’s aimed at a younger age group than YA (Percy Jackson, Underland Chronicles, et al). There’s nothing controversial or gaspworthy inside. It’s less about the robot and more about everything surrounding him. Like the AI that runs the school being super Big Brother. It’s kind of like 1984 meets Double Dare.

There are some plot threads that taper off into nothingness, as if there were already sequels planned, which make me disgusted. I hate when marketers plan a series before anyone’s seen it. The robot doesn’t act much like a robot (I say that about every robot book, don’t I?). There was a perfectly serviceable opportunity to present some interesting STEM topics here, like “what IS fuzzy logic?” “how does/could AI work?” WWW: Wake is a book that better explores these ideas, and I had no inclination to continue that series (too metaphysical).

I know I’m complaining more than praising, but the things that the book does right are basic and safe. Harmless. I could really only recommend this book if you’ve got nothing else that’s flipping your cookie at the moment. 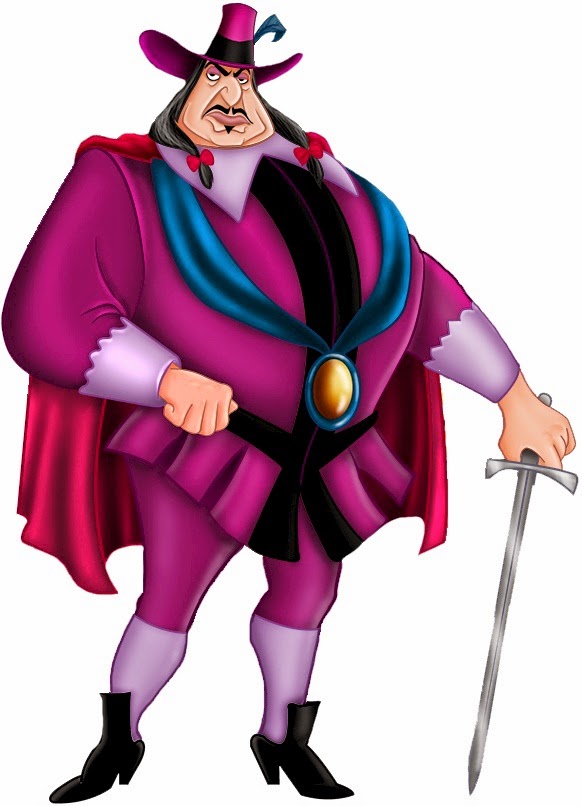 Captain Hook’s personality in Alameda Slim’s body. Ratcliffe is one of the weakest antagonists I’ve ever seen. The movie doesn’t even need him — it’s West Wide Story. He’s merely a symbol for Mother England. You know, the whole REASON their trip was funded and provided in the first place? The name even has the word “Rat” in it, and it’s not a clever pun.  That kind of move telegraphs the weakness of your character.

But you know what, fuck Disney for screwing with this guy. They propagandized him into a greedy, capitalistic slob who will destroy everything to get what he wants. Guess what — that’s what he was paid to do. That’s what John Smith was supposed to do, but he was busy rolling in the grass with a fourteen-year-old. You might as well say Scrooge McDuck is a villain (and don’t tell me he found his entire fortune by treasure hunting). And I can’t even talk about the historical inaccuracies — I gotta stick to the plot. So here you go.

Motivation: Greed. Pure, simple, and heavy-handed. They try and throw in some back story for him like this is his “last chance” to become successful for “those backstabbers in court”. Couldn’t be more meaningless. A tossed in bit of dialogue does not a motivation make.

Character Strengths: I like how they call him “Governor Ratcliffe” when he does no governing whatsoever. How can you call yourself a political leader of a piece of land with no buildings on it?  In fact, he’s one of the few Disney villains that loses the loyalty of his troops before the end (Scar being another ignoble example).

His time-filling song does some good to motivate the men on the search for gold. But after a few digs, they’re already discussing mutiny (side note: who exactly is the captain on this voyage?) After that, his only recourse is to redirect their anger to the Indians.

Evilness: See above, regarding scapegoating the Indians for his own shortcomings. He takes the prejudices already held against them and exploits it. Of course, when Pocahontas and John Smith’s love “conquers all”, Ratcliffe shoots anyway, wounding his golden boy. Here’s a guy who doesn’t know when he’s licked. Lust for greed and power turns into petty vengeance, grasping for any victory. What did he expect to happen after he pulled that trigger?

Tools: Okay, do I have to talk about Wiggins and the dog? No? Good. How about the ship full of strong, hearty men ready to serve… that show immediate progressive thought and begin plans to overthrow him? Geez, it’s like the American Revolution extremely condensed.

Complement to the Hero: The movie makes a point to feature exported characters on both sides. Chief Powhatan is just as bad as Ratcliffe, but he gets a free pass because he’s an Indian. His motivation isn’t sinful, he’s just afraid and angry. It doesn’t matter that they’re in a constant state of war, and have no interest in expanding their horizons. They’re a noble people.

And then you’ve got John Smith — the fit, blond all-American Englishman voiced by Australian Mel Gibson. Remember how I said Disney likes to make poncey and foppish villains? This one turned it up to eleven, enough for people to start taking notice. His villain song even includes the words “hey nonny nonny”.

Fatal Flaw: I don’t know how Ratcliffe got into his position, but he sure doesn’t know how to keep it. His poor leadership skills are only a contributing factor. The greed and wrath keep him blind to anything happening around him. He’s a worse listener than Hiccup’s father. When you have to keep saying “This is my land and I make the rules here”, it is clear that you are not.

Method of Defeat/Death: Ratcliffe leads his men to the Powhatan village, just in time to see Pocahontas save John Smith’s life. The chief listens to the colors of the wind while Ratcliffe yanks a gun and fires. John Smith does his best Kevin Costner and jumps in front of the bullet musket ball (that somehow traveled hundreds of yards up and still hit its mark), and the men realize he’s crossed a moral event horizon. They tie him up and thrown him in the boat back to England while “I Will Always Love You” plays for John Smith and Pocahontas.