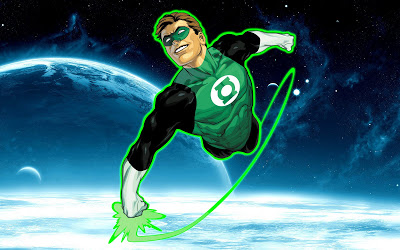 Green Lantern got his powers when the previous protector of the Earth-zone-sector crashed to Earth and gave Hal Jordan (or whoever) the magic ring that chose him as the new protector. Before this, no one had ever heard of the Green Lantern, the planet had no aliens, nothing attacking it, no giant yellow clouds or sinister aliens bucking to destroy some shit.

But gee, after the new GL became human, there’s all kinds of shit attacking the world. Does someone want to investigate this guy’s work-ethic? Maybe evaluate his performance. Whoever these aliens are that watch all the Green Lanterns, maybe they wanna check out how this guy’s doing on the job. Because there sure wasn’t this much trouble before.

I have discovered something quite interesting. Actually, I discovered it a long time ago, just haven’t written about it.

Graphic novelists make really good writers. I mean really good. All of my favorite authors, the ones with books I could read over and over again, started off as comic book writers.

Those authors are Richard Kadrey, Peter David, Neil Gaiman, and Neal Stephenson (Snow Crash was originally going to be a graphic novel, and it sure reads like one). There may be others that I don’t know of.

I don’t know what it is about the comic style that makes good novelists. Maybe you learn a lot about pacing and keeping the reader interested when you write comics. For some reason, the lack of needing to write imagery and description doesn’t hurt the text. Maybe that’s on purpose — bogging the reader down with infodump images slows down the story.

Do you know of any other comic writers turned novel writers that I’m missing? 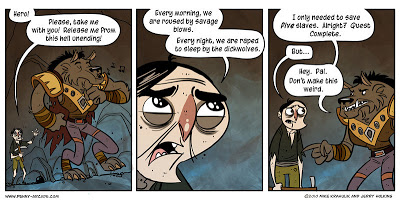 I’ve been interested in reading this Penny Arcade Dickwolves debacle ever since this timeline was posted because it deals with many intriguing issues. In mass media outlets, often you end up with political correctness, vocal minorities, and advertising sponsors winning the upper hand, and that’s even if the producers let it go that far. Never do the creators get a say. That’s why people like me turn to the web to find entertainment that’s not limited by corporate executives. But Penny Arcade is a entrepreneur webcomic, made by guys who aren’t afraid to call a spade a spade.

For those who don’t want to click the link, here’s the highlights. Penny Arcade, probably one of the biggest web-exclusive strips, published the comic above on 8/11/10. This drew objections from a “feminist” blog. Penny Arcade posted a response (in the form of a comic) the next day. Various other blogs weigh in, mostly objecting.

Later, Penny Arcade announces they’ll be selling a dickwolf t-shirt in their merchandise store (it’s not offensive, it’s a sport t-shirt, and resembles a mash-up of the Minnesota Wild and Minnesota Timberwolves logo — are PA from my corner of the world?), but Courtney Stanton (works as project manager for a video game company) objects. On January 24th, she announces that she was asked to speak at the Penny Arcade convention, but declined. Two days later, all dickwolf merch is removed from the Penny Arcade store. More blogs weigh in, and interpretations abound.

This is where it gets interesting. On January 29, someone asks Mike (one of the Penny Arcade people) whether dickwolf t-shirts will be allowed at the Penny Arcade convention. Mike responds “I’ll be wearing mine”.

More blogs weigh in. Some are conflicted. Some object to Penny Arcade’s handling of the situation. Some object to their removal of the merchandise. Some object to the objections. (You just can’t win, can you?) Courtney Stanton displays a pictorial breakdown of some of the responses she’s gotten, many of which involve the words “fat”, “whale”, “ugly”, “die in a fire”, and other unpleasant things.

On February 3rd, Mike and Jerry, the creators of Penny Arcade, finally weigh in on the issue, probably prompted by a tweeted death threat saying “A funny joke: Go to Mike Krahulik’s house, literally murder his wife and child” (paraphrased for readability). Basically, they summarize what’s happened so far, and ask people to stop behaving like sociopaths.

“Rape as Comedy” is nothing new, just as “Rape is Love” and “Rape as Redemption” are common in media. Yes, girls, even your favorite “Gone with the Wind” is no doe-eyed innocent. Don’t you remember the scene where Rhett Butler forcibly carries Scarlet unwillingly up the stairs, kicking and screaming? In the next shot, she’s laying there in bed with a smile on her face, with Rhett next to her. Exactly, what do you think happened?

But that’s not what intrigues me about the argument.

The interesting thing is this also comes on the heels of a recent controversy where BitchFest made a list of 100 YA novels for the feminist reader. Some people objected to some of the entries on the list (mostly “Tender Morsels” which involves graphic, continuous rape and incest content). BitchMedia removed those entries which prompted people like Scott Westerfeld (among others), who also had entries on the list, to object to that removal, and ask for his own entries to be removed when it was clear that BitchMedia made a kneejerk censorship reaction and hadn’t even read the book. See here for a summary of that debate. Personally, why anyone would put stock in what an outlet called “BitchMedia” says is beyond me.

But back to Penny Arcade. This is what those guys were thinking: a dickwolf — a wolf with erect phalluses for limbs — who rapes people to sleep is ridiculous. So ridiculous, it’s hilarious. Twelve-year-old boy hilarious, but still, it’s so silly it’s funny. That’s what comedy is — pushing the envelope to the point of absurdity. They weren’t condoning or marginalizing rape, because why would they? It’s not on their mind 24/7. They were marginalizing video games’s dubious moral stance in real world scenarios.

I sympathize with PA in this debate because A) I’m anti-censorship & I wouldn’t want either the government or “the masses” determining what my product should or shouldn’t say B) I’ve been here recently when I tried to make some comments on Jim C. Hines’s forum. Everyone there attacked me and my opinions immediately. It doesn’t matter which side was right, we could not have a rational discussion about it, because people were too emotionally charged. It’s the same as racism. Same with abortion. Same with homosexual rights. We cannot solve these problems until we argue with objectivity, logic, and rationality. Not emotions, personal feelings, or gut instincts.

So until you can stop calling people a fat whale or threaten to kill someone’s family, shit like this will keep happening. At this point the debate is causing more pain than the original act.

But here’s the two things I want to say. One: I cannot reconcile the fact that they decided to pull the t-shirt from their stores, then Mike says that he’ll be wearing his at PAX. That seems pretty hypocritical. I know there’s got to be more to the story than that. It could have been left hand not knowing what the right was doing. That often happens in business. But it wasn’t enough to say that there won’t be any restrictions on dickwolf t-shirts, he had to say he’ll be actively wearing one. Isn’t that like Murabak wearing a “Free Egypt” t-shirt? I don’t think PA needs to apologize over this, but I do think they need to clear it up. I don’t think there’s anything they need to apologize for. Apology implicates regret, sadness, and remorse, and you should never have that for something you created unless it hurt people. No one is hurt by a comic strip. PA should stand by their work.

Second: I’m not going to talk about this in terms of censorship vs. sensititve issues like rape, but I will use this analogy:

Say you’re at a playground, you brought lunch, there’s a bunch of kids around playing. Now a mom, a total stranger, comes up to you and asks “excuse me, my son has a severe peanut allergy. Could you wash your kids hands so they don’t get peanut butter all over the equipment?”

First, you might not think this is a big request. But think about it a little further. Wouldn’t you be surprised? Taken aback? I know I would be. In fact, I might feel forced to leave, unwelcome. I might not want to come back to that playground if that woman’s going to be there again. I know it’s awkward for her to ask, but it’s awkward for me to give in to a foolish request.

Who knows if someone’s peanut-laden kid was there five minutes ago? Do you think wiping a kids hands is going to do anything but a passable job to get the peanut butter off? I don’t have a sink in my diaper bag. Why is it your job to safeguard this kid’s life when you’re not the one who has the problem?

No, I’ve never been there. I have no allergies. I don’t know what it’s like to have allergies or asthma. I imagine it’s bad. Not being able to breathe is scary. But if I don’t have this condition, why should I be forced to act like I do? I’m not the one with the allergy. Why is one person dictating the policies that change it for all of us? Why are we listening to a few screwballs instead of listening to the people who had no problem? The majority of the people liked the comic, but they had nothing to complain about, so they stayed silent.

(Here’s the post where I gleaned the scenario from. Be sure to read all the comments.)

Remember what Neil Gaiman said. Freedom of speech is not a scalpel. It’s a club. It must defend all speech or none, even icky speech. This is the web. Offensive material is everywhere. But anyone who says it should be taken down because of their personal feelings is being selfish and inconsiderate to a lot of people.