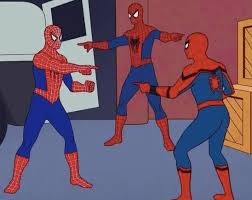 So in the wake of the election, there is this zeitgeist happening. Now that (hopefully) politics are returning to usual, how do we mend the divide that’s cleaved the country the past four years?

The election wasn’t close, but it wasn’t a landslide either. Trump and the GOP still gained a resounding collection of votes. They gained a few seats in the house and didn’t lose the Senate majority. Nearly half the world looked at the past four years, the pandemic, the white supremacism, the economy, the crimes, the fascism, the impeachment, the children in cages, and said “yes, I’d like more of that“.

It should be an easy moral litmus test. But in the privacy of the polls, 57% of white America proved they don’t give a fuck about anyone but themselves. “I’m gonna get mine,” they said, because none of the past four years’ strife involved them. It involved women, Mexicans, Muslims, LGBTQ, Blacks, and so on. Anyone who was a straight white male got what they wanted (or at least didn’t get theirs taken away).

We are still in the war of rural vs. urban. Country mouse vs. city mouse. The pendulum is swinging, but it isn’t swinging far. We’re reaching equilibrium. Which means no consensus on issues. Which means nobody’s happy. Which means people keep fighting for their causes with vigor because the margin is small enough that they believe they can win.

So in the aftermath of the election, there have been calls to reach across the aisle. Understand the red voter. Work with your GOP senators and congressman and compromise with them. Because there isn’t going to be any progress without their votes.

On the other hand, there have also been calls to, as the young people say, “fuck that shit.”

For the past four years a vocal number of Americans have been projecting “fuck your feelings” and “own the libtards” and “fake news” and all that shit. Behaviors that deal with “no compromise”, “no kindness”, and racism and criminals acts and vaguely supporting white supremacists. Stop anything “they” do just because it’s “them” doing it. Republicans keep calling it Obamacare so they can tie it to the “evil Democrats”. Meanwhile, Democrats consider that a compliment. Obama was able to do something no one else was able to do–pass government-mandated healthcare.

I once heard a guy on the conservative talk radio talking about “the Democratic Party… or as I call it, the Anti-American Party…” and I was like “Really? You really think the Democrats motivation is their hate for America? That their primary goal is to dismantle the country? You don’t think they just have different priorities or different ideas on how to execute solutions? No, we’re just going to call the group that makes up half the government ‘anti-American’ and leave it there?”

The Republicans and Democrats have their power split evenly. One side wants revenge for Obamacare and Bernie Sanders. The other wants revenge for Trump and Mitch McConnell. So here’s the question: who puts the gun down first?

Personally, I’ve always felt the DFL needs to be more aggressive. They’ve never had a strong leader (see my last political post). They let the opposition get away with things without reprisal. They gave up easily when Gore won the popular vote, and again when Hillary won the popular vote. Not even a proposal to say “hey, let’s fix this so a candidate who wasn’t elected doesn’t get elected again.” We need to make it so “control of the Senate” doesn’t mean total domination.

But they don’t want to fight a war. Maybe that’s part of their philosophy. Nonetheless, a war has been thrust upon them.

Democrats tried to be kind. When Anton Scalia died, Obama nominated Merrick Garland and the Republicans said “no” for a year. A year! Because they wanted to bide their time until they could install their candidate. And they gave bullshit excuses like “oh, you shouldn’t nominate a Supreme Court justice in an election year.” And what did that compromise get us? They shoved in three of their justices within four years. THREE! The last providing clear damning evidence of the hypocrisy of Lindsey Graham, and by extension, his party.

And what will the Democrats do about that lie? How will they punish the Republicans for their actions? They won’t. What did they get back from that compromise? Nothing. Democrats give and give and give. Republicans take and give nothing back. They’ve proven they only want power and integrity is no obstacle to get it. Why should Democrats keep letting bullies get what they want simply because they’re the most aggressive and griping about it? The squeaky wheel keeps getting the grease, when it should be replaced.

So what is the solution? Strike back? Stack the courts? Revoke all the policies Trump made? Push the policies that keep getting stonewalled (e.g. gun control, healthcare)? Is that what politics is now? A revenge game? If you’re going to pass this law, then I’m going to pass this law. Well, if you’re going to do that, I’m going to do this. Just a cycle of revenge. It displaces order, but it does set a precedent that actions have consequences. They were breaking the postal service, for God’s sake. They were telling the Proud Boys to “stand back and stand by”. That doesn’t deserve forgiveness.

The best part of the post-election celebration was the reporter turning to an Trump junkie redneck (yet still wearing a mask) who interrupted him and telling him to fuck off.

After years of mainstream journalism being called “fake news”, being attacked anytime anything negative about the president or the GOP was said, this was satisfying. I took it as a sign that no more would Fox News and OAN get attention pellets for their biased reporting, scare-mongering, and audience-pandering.

It makes me wonder why we tolerate these fuckers, like QAnon and the Proud Boys and Milo Yiannopoulos and Tucker Carlson and Joe Rogan. Why are these idiots allowed to preach their ridiculous conspiracy theories and rhetoric of violence & hate. Because we believe in free speech? That only applies to the government. Everything else has the ban hammer.

White supremacy isn’t just tiki torches or viral Alex Jones rants. It’s greed for your own race–your own life–and not thinking about how others live. If you don’t notice things like how few PoC the book you’re reading has or where are all the women in your office are, you’re part of the problem.

But if you take out your pound of flesh, what’s the end game? What’s the result? The country is so split down the middle that if no one yields, nothing will ever get done. If you want to pass a “Green New Deal” or “Planned Parenthood” laws, you’re going to need Republican votes. Remember the north-going Zax and the south-going Zax? Or the Bitter Butter Battle? Whoever wins doesn’t matter, because whoever yields first is considered the loser.

Here are the two arguments. One says “we have to work together/love thy neighbor/kill them with kindness”. The other says “you can’t just pretend the last four years didn’t happen. The last four years of entitled hillbillies and rich white button-downs waving guns around and Karens demanding to see the manager. Killing innocents is fine if they’re not on your side. Compromise and kindness is weakness.

So who does put the gun first? I certainly don’t feel like it. Even though books and movies keep telling me it’s the right thing to do. In Tangled, Mother Gothel kidnapped Rapunzel for eighteen years, kept her identity hidden, exploited her magic power, chained her up, stabbed her lover. And still Rapunzel reaches for her as she’s falling out of the tower. It’s a “blink-and-you’ll-miss-it” shot, but Disney put that in so Rapunzel didn’t seem like she was turning a blind eye to her death (or to show the effect of long-term abuse).

The choices are to respond to the past in kind or forget it & move on. If the former, we sink to their level. But if the latter, their bad behavior has no weight. Can you imagine if we did that to Japan and Germany after the World War II? Just said “Okay, fighting’s over, everyone go back to your homes.” No, we held the German and Japanese leaders accountable for their crimes. But only because we won. The victor gets to define history.

I can’t pretend the last four years didn’t happen. Not after so many deaths, so much fear, so much crime. Why are there no good ways to deal with bullies? Why do they always get their way? Why is it when you strike back, you get punished just as bad?

Moral of the story: Punch a Nazi. That’s what they’re there for.