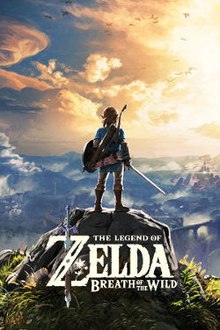 So when I got my Switch for my birthday, I also got Super Mario Odyssey, Kirby: Star Allies, and The Legend of Zelda: Breath of the Wild. When I finished Skyward Sword, I had said no more to Zelda. I was sick of them getting the big new stuff right, but getting the old little things wrong. Like forcing obnoxious motion controls, repetitious & dumbass messages like “you got a red rupee! It’s worth (20) rupees!” for the hundredth time, weird-ass characters like Groose and Ghirahim (as unpleasant as he is unpronounceable). But everyone’s declared Breath of the Wild the bestest game on the Switch, nay, mayhaps the world, 10/10, four stars. Also I didn’t buy it, my wife did (at this point she’s more into Zelda than I am). So it’s not my fault–I had this Zelda forced upon me.

So sure, let’s boot it up. The whole family is gathered in front of the TV like it’s one of Roosevelt’s fireside chats. And the first thing we see is a light (go towards the light, Link!) Then … words! Holy schneikes, someone’s actually speaking to me. Using dialogue! In English! (with a slight British twang.) That’s never happened in a Zelda game. You’re always having to fill in the voices with whatever they provide from occasional chirps and grunts.

Okay, then Link wakes up as water drains from the sarcophagus he’s lying in. Looks like he’s been in some cryonic sleep, like Han Solo out of carbonite. There’s some huge pillar above him, and then a console lights up. Isn’t this how Alien started?

So you get the Wii U Gamepad Sheikah Slate from the console, then head into another room. Could be storage, could be a hallway. There’s some rotten barrels and chests containing shoddy clothes (not the traditional green garb). My youngest comments that the aesthetic is just like Black Panther, which I enthusiastically agree with. Zelda’s been trending this way ever since the Tingle Tuner in TWW. It blossomed in Skyward Sword with the robots and time travel and companion who speaks like C-3PO. It’s going from swords-and-sorcery to this quasi-technological design closer to science fiction tropes. (BTW, my youngest also chooses not to equip Link’s shirt, because she likes him bare-chested.)

Then the real door opens up and we see the vast, vast, VAST land of Hyrule.

Wow, it’s beautiful. There’s Death Mountain. And there’s Hyrule Castle. It all looks so far away. A thousand times bigger than Hyrule field in Ocarina of Time. And it’s all one piece, not broken up into “lands” like Skyward Sword. You can walk from one end to the other without interruption, like Grand Theft Auto, but no buildings or people. And my kids are weirded out because the only Zelda they’ve ever played is The Wind Waker. So they’re not used to a Hyrule not underwater.

Speaking of people, there’s a figure down the slope to the left. And we discover that it’s… Old Man! He’s back! I have to explain to my kids “No, you don’t understand. This guy is from the very first Zelda game. He’s the first person you meet. And he hasn’t really shown up since.”

Time for a little exploring. We go to the ruined temple further down (is this the Temple of Time? hm…) and see the first enemy. Not a hundred percent sure what it is, but definitely a blin of some kind. Stands out like a sore thumb–cartoony pink against green. Luckily, we found an axe. Not a sword, an axe. So this means we’ll get to have different weapons? Cool. We also get a bow a little later. Whoa, this is WAY earlier than you should be getting the bow. No Zelda game before it has had it this early. Usually it comes midway through, because a long-range weapon is just too powerful early in the game, before you’ve mastered swordplay.

In fact, no other Zelda game has started like this, with complete access to a giant world. Usually you have to tool around your home village for half an hour. Gotta talk to everyone, read block after block of text. Maybe do some stupid mini-game. Someone asks you to “Press B” to show how high you can jump. But here… everything’s so empty. Why? Where is everybody? I know Smoky Snake Ganon is sinewing around the castle. Maybe that’s affecting someone. But there’s not even the sign of an occasional hotspot. Or regions with other sentient species like Koroks or Mogmas. Not even an obnoxious fairy that hides in your sword and reminds you your Wiimote batteries are low.

There’s no towns. No passerbys. Barely any animals–just butterflies and an occasional bird. No man-made structures. No rupees or hearts when you break a bush. Not even a running mailman. It’s all nature. Even lacks the bright snappy colors–everything is doused grass-green. I feel like the last man on Earth. With the breakable weapons, crafting recipes, and health from food instead of hearts, it feels more like Skyrim (author’s note: I’ve never played Skyrim).

P.S. One of the last things we did was get the Sheikah Tower activated (warping early too? Damn, son.) My eldest daughter is controlling it, and we’re supposed to find a way down. She looks over the side, wondering what to do. “Should I jump?” she asks. Mom says “No, don’t jump”, but me and youngest say “Jump! Jump!” We all know full well what’s going to happen. She jumps and of course, dies. And we all laugh. No one’s going to find her body either, having dropped into a little nest of boulders out of line of sight.